Earlier today, we complained to Daily Mail editors about an article by Sam Baker falsely claiming that Professor David Miller was dismissed by Bristol University due to his ‘comments about Israel’.  We demonstrated that he was sacked due to his record of conspiratorial antisemitic statements, some of which were directed towards the Jewish students he was teaching – and which reportedly led to Jewish students on campus being subjected to harassment and abuse.

We noted that – as we demonstrated in a recent post – Miller has called for the end of Zionism “as a functioning ideology of the world”, depicted Bristol’s Jewish Society, and indeed all Jewish Societies in the UK, as local agents of a foreign power – Israel – trying to subvert British freedoms, and evoked the idea of a global Zionist conspiracy.  Indeed, we added, Miller’s conspiratorial thinking expressed itself following criticism of those very comments about the Jewish Societies, when he suggested  that attacks on him by British Jews and organisations were “directed by the State of Israel”.

We promptly received a reply denying that the article claimed that Professor Miller was sacked due to ‘comments about Israel’.  But, as you can see in the snapshot below, the article made some variation of that claim four times – in the headline, strap line, first sentence and third sentence. 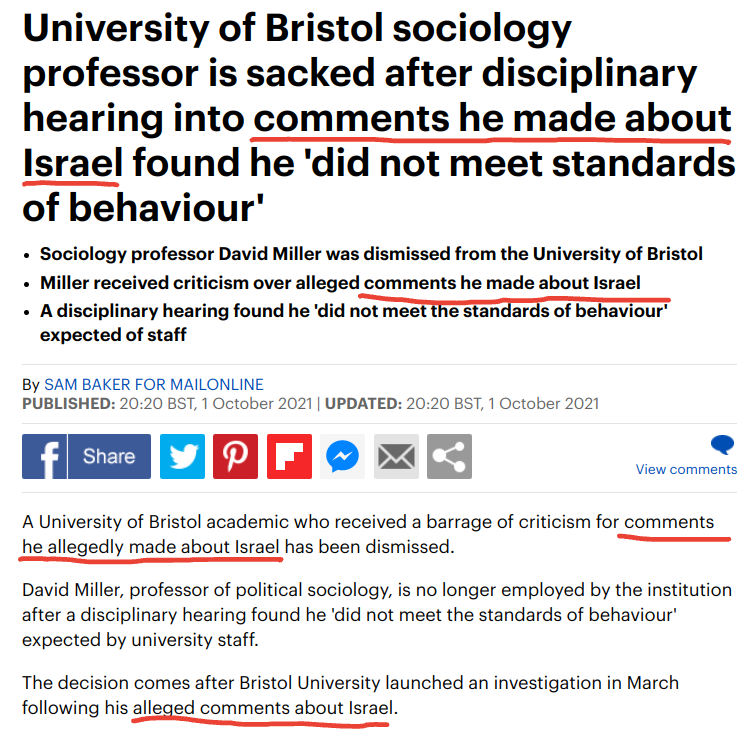 Though the article does include statements by the CST and the Jewish Society praising Miller’s dismissal, and noting the abuse suffered by Jewish students, the word “antisemitism” doesn’t appear once in the article. In contrast, even the Guardian’s report on the row managed to accurately frame it as pertaining to Miller’s antisemitism.
We’re truly at a loss to explain editors’ rejection of our complaint, and are considering filing a complaint with IPSO.