BBC Radio 4 is currently running a series called ‘100 Years of Exile’ featuring the academic Katy Long who has previously presented Israel-related content for that station.

The second episode was aired on October 12th under the title ‘What do we owe refugees?’. 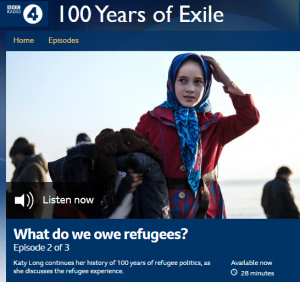 “In this second episode, about the human experience of being a refugee, and working with them, Katy will examine how the refugee camp has come to be symbolic of the refugee experience. She’ll examine the refugee business and the explosive growth of organisations supporting refugees. And as she speaks to refugees, and hears the hopes and dreams of those who live in refugee camps, she’ll consider what the future might hold for them.”

Near the beginning of that episode Long describes its purpose as being to discuss “what happens when refugees have successfully fled persecution but still haven’t found a home”. Listeners hear about refugee camps in places including Uganda and Greece and an additional example is introduced at 21:20 when a woman’s voice is heard saying: [emphasis in italics in the original]

“I live in one of the twelve Palestinian refugee camps in Lebanon.”

Long introduces her interviewee by first name only – Basma – describing her as a “third generation Palestinian refugee” but failing to provide any additional information which would help listeners understand why she specifically was chosen to participate in the programme and whether or not she is the same Basma from Rashidieh Camp who has studied at British universities and was formerly employed by the UNHRC.

Basma tells listeners that the residents of her camp are not allowed to build, do not have playgrounds, gardens or open places. She notes the overcrowding, the lack of access to justice and basic human rights as well as a high level of unemployment, stigma and discrimination.

No effort is made by either Long or her interviewee to explain to listeners why Palestinians have been kept in camps by Lebanon for generations. Audiences hear nothing at all about the Lebanese government’s long-running intentional discrimination against Palestinian refugees or the politics behind that policy.

Neither are listeners given any objective explanation as to why Palestinian refugees have different criteria (including hereditary status) to refugees from the rest of the world and a separate UN agency that refrains from working towards their integration (even in territories run by Palestinians) and resettlement in host countries. Instead, Long asks her obviously not objective interviewee to explain that topic.

Long: “And can you explain for us who is a Palestinian refugee because it’s a different definition from the one in the 1951 refugee convention.”

Long: “Her family have spent more than seventy years in exile. Her camp has existed since 1936.”

Clearly that latter statement steers listeners towards the inaccurate conclusion that at least one camp for Palestinian refugees existed in Lebanon over a decade before it was needed. The only refugee camp in Lebanon dating from 1936 is Rashidieh camp south of Tyre and as noted by UNRWA, it was “built by the French government in 1936 to accommodate Armenian refugees who fled to Lebanon”, with the ‘new camp’ for Palestinians having been established in 1963.

Listeners then hear unqualified promotion of the notion of ‘right of return’ for the descendants of Palestinian refugees.

Listeners are given no information that would help them understand what that would mean for Israel and the millions of Jewish former refugees and their descendants living there or for the chances of a peaceful solution to the conflict. Indeed Long then implies that “return for Palestinian refugees like Basma” would be a viable option were it not opposed by Israelis.

Long: “Basma is clearly in it for the long haul. But just listen to Michal Rozin, a member of the Israeli parliament for the Left-wing Meretz party. Michal has a long history of campaigning for refugees’ rights in Israel. Yet when I asked her about return for Palestinian refugees like Basma, as so often in this series, there was a but.”

Michal Rozin tells listeners that “you can’t solve the issue by bringing back millions of Palestinians back to [the] Israeli state” and predicts that most of the Palestinian refugees and their descendants will stay in other countries in the region while a future Palestinian state could absorb some.

Once again listeners are given no information that would help them understand Rozin’s position.

In her closing remarks Long states:

Long: “100 years ago the world decided refugee crises couldn’t continue indefinitely. Camps were not a solution. Yet 100 years on we have more refugees, more refugee camps, more endless cycles of exile. So how does this end?”

Clearly in relation to Palestinian refugees, Katy Long failed to provide listeners with the background information which would help them understand how their deliberately prolonged refugee status could be resolved.

By failing to address the issue of UNRWA’s perpetuation of the refugee status of Palestinians and the Arab League’s politically motivated exploitation of the topic, Long fell well short of her declared intention to “examine the refugee business” for Radio 4’s audience.

UNRAVELLING YEARS OF BBC STATISTICS ON PALESTINIAN REFUGEES IN LEBANON

WHY ARE PALESTINIAN REFUGEES DIFFERENT FROM ALL OTHER REFUGEES?