Regular readers are no doubt familiar with the BBC’s long record of mainstreaming both the anti-Israel BDS campaign and the politically motivated baseless ‘apartheid’ smear.

For years the corporation has reported BDS related stories without adequately clarifying that campaign’s real agenda in its own words and in August 2015, we learned that the BBC considers the provision of such crucial background information “not our role“. Likewise, the BBC regularly amplifies baseless claims of Israeli ‘apartheid’ but refrains from providing its audiences with factual information explaining the redundancy of that tactical trope and the true aims of those who promote it.

In addition, the BBC regularly provides uncritical promotion for NGOs including ‘Human Rights Watch’ and ‘B’tselem’ which – in breach of its own editorial guidelines – it blandly describes as ‘human rights groups’ while refraining from clarifying their political agendas.

All those long-standing editorial policies were on display in an eighty-second item aired on BBC Radio 4’s ‘Six O’Clock News’ on October 12th (from 13:32 here). [emphasis in bold added]

Newsreader: “The best-selling author Sally Rooney has explained why she has decided against selling the Hebrew language rights to her new novel to a publisher based in Israel. The company involved – Modan – translated her two previous books but Ms Rooney said she could not accept a new contract for the firm because it had not publicly distanced itself from Israel’s treatment of the Palestinians, which she described as apartheid. Our Middle East correspondent Tom Bateman reports from Jerusalem.”

Bateman: “Sally Rooney is critically acclaimed. A 30-year-old writing about life for millennials whose books have appeared in dozens of languages. She says she was proud to have her first two novels translated into Hebrew but has rejected the same Israeli publisher for her latest book ‘Beautiful World, Where Are You’. Explaining the decision, she voiced support for BDS – the movement that seeks an economic and cultural boycott of Israel over its military occupation and treatment of the Palestinians. She also cited two reports by human rights groups this year which had labelled Israel an apartheid state. Israel vehemently opposes the boycott movement, calling it antisemitic. One government minister suggested Sally Rooney’s books were now not worth reading. But Palestinian rights groups welcomed her decision, with one comparing it to the way cultural figures helped end the policy of apartheid in South Africa.”

In just one minute and 20 seconds Radio 4 listeners heard three unqualified references to ‘apartheid’ and two vague, unexplained and context-free references to “treatment of the Palestinians”. They were told that the BDS campaign seeks a “boycott” but not that it ultimately seeks to deny Jews the right of self-determination in their own state. Two unidentified political NGOs (HRW and B’tselem – see ‘related articles’ below) were portrayed using the ‘halo’ term “human rights groups”.  The anti-Israel Palestinian organisation ‘PACBI’ (which made the irrelevant and offensive reference to South Africa that Bateman chose to amplify) also went unnamed but was signposted as a ‘rights group’. 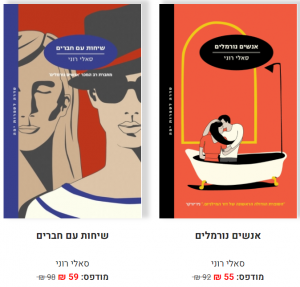 Beyond the actual story of an author who has previously made financial gain from having two books translated into Hebrew and sold in Israel while the same political conditions existed (2017 and 2018) but has now chosen to opt for publicity generating feelgood ‘virtue signalling’ by means of an utterly futile announcement that will change nothing whatsoever on the ground, it is once again all too obvious that audiences cannot rely on the BBC to report BDS related stories in an accurate and impartial manner that contributes to their understanding of the underlying issues.

THE BBC AND THE ‘APARTHEID’ SMEAR