Previously we looked at a BBC Radio 4 news bulletin’s problematic presentation of a story concerning an Irish novelist who refuses to have a book translated into Hebrew by an Israeli publishing house. 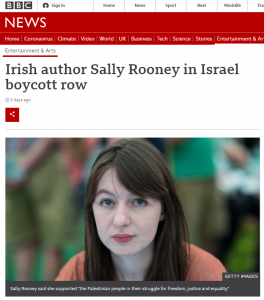 Readers of that report (which, in contrast to the Radio 4 news bulletin, will remain available as ‘permanent public record’) are told that Rooney said her decision was “in support of calls to boycott Israel over its policies towards the Palestinians” but are not informed what those “policies” entail.

The report also tells readers that “[a] senior Israeli minister said such boycotts were a form of anti-Semitism” and that “Nachman Shai said: “The cultural boycott of Israel, anti-Semitism in a new guise”…” but nowhere do readers find a factual explanation of the aims of the BDS campaign which would help them understand the minister’s statement.

Instead, the BBC provides a tepid and inadequate description of the aim of the BDS campaign and, as usual, uses the ‘Israel says’ formula to tick the box on that issue:

“…Ms Rooney said her decision was in support of the pro-Palestinian Boycott, Divestment and Sanctions (BDS) movement, which calls for a complete boycott of Israel.”

Like previous BBC reports on the topic of BDS, this one too refrains from informing audiences in its own words that – as clearly stated by Omar Barghouti and others in the past – the campaign’s agenda is actually the elimination of the Jewish state.

Once again we see that the BBC cannot be trusted to report accurately and impartially on stories concerning the BDS campaign.

In common with the radio report, the written one includes repeated context-free and irrelevant references to apartheid and the former apartheid regime in South Africa. Readers also find a link to a previous BBC report that uncritically amplifies a report from an inadequately presented political NGO.

“Citing a recent report by Human Rights Watch which accused Israel of practising apartheid, Ms Rooney said her decision was in support of the pro-Palestinian Boycott, Divestment and Sanctions (BDS) movement, which calls for a complete boycott of Israel.

She could not, she said, “accept a new contract with an Israeli company that does not publicly distance itself from apartheid and support the UN-stipulated rights of the Palestinian people. […]

Apartheid was a policy of racial segregation and discrimination enforced by the white minority government against the black majority in South Africa from 1948 until 1991.”

Like the radio report, the article amplifies a statement – including an embedded Tweet – from the inadequately presented organisation PACBI which promotes the same irrelevant reference to South Africa and baseless accusations of apartheid. 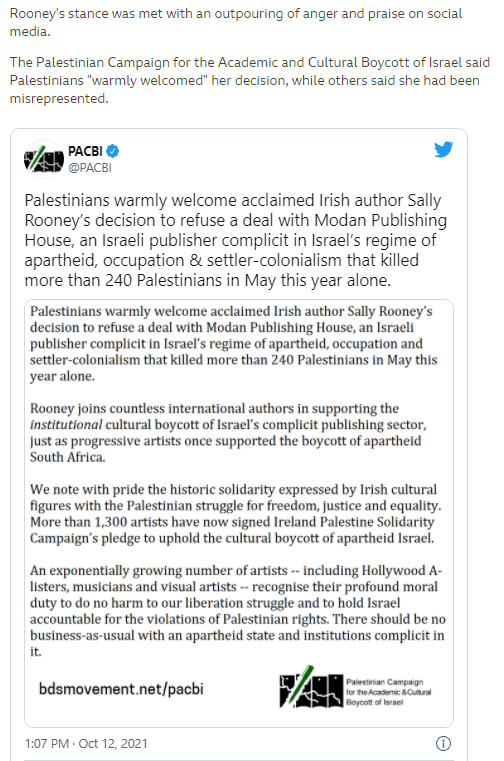 Once again we see that the BBC is happy to provide uncritical amplification for third party use of the ‘apartheid smear’ without any effort made to clarify to its worldwide audiences why that politically motivated trope is baseless, beyond the token observation that Israel “vehemently rejects any comparison with apartheid”.

Towards the end of the report readers are directed to a link (previously promoted by the anti-Israel site ‘Mondoweiss’ among others) which advances numerous gross falsehoods about Israel such as the claim that in May it perpetrated a “massacre” in Gaza which included “indiscriminate bombing” of hospitals.

“The Israel-Palestinian conflict has long been a battleground for those in the arts world, as well as celebrities and academics. Earlier this year, Rooney signed an open letter in support of Palestinian artists and writers accusing Israel of crimes against the Palestinian people.”

It is not the BBC’s job to provide uncritical amplification for political campaigns of any stripe under the guise of a news story: rather it is obliged to present audiences with accurate and impartial information that enhances their understanding of the particular topic.

However, in items relating to political campaigning aimed at delegitimising Israel’s very existence – be it from the BDS campaign, political organisations such as ‘Human Rights Watch’ and PACBI or individuals such as Sally Rooney or Roger Waters – the BBC consistently ignores its own obligations and editorial guidelines.