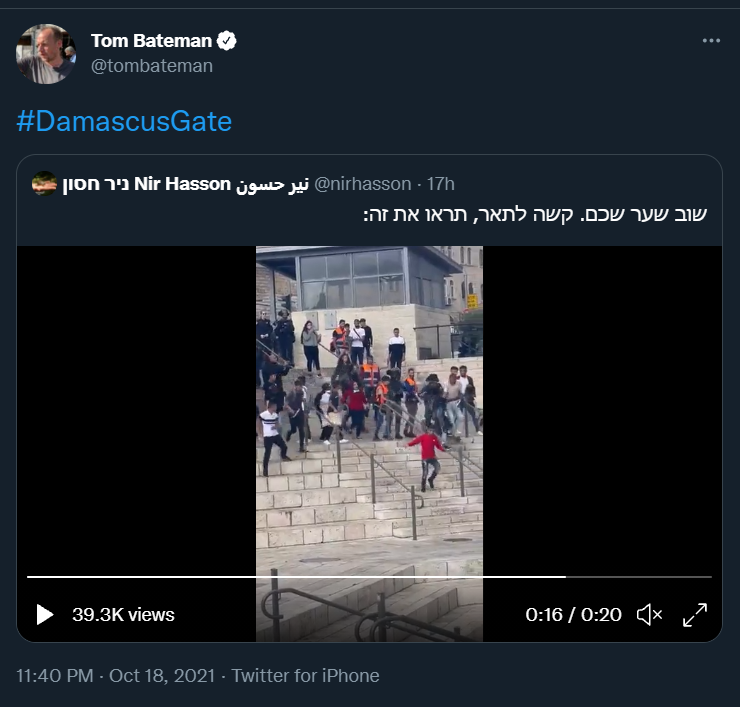 The Hebrew wording to Hasson’s Tweet reads: “Damascus Gate again. Hard to describe, look at this” and the video shows some sort of altercation between security forces and a female civilian.

Roughly an hour later Hasson posted another Tweet which reads: “I got to the computer and checked the full video, what preceded this is her argument with the police officer and then it looks like she spat at him and tried to get away and still we’re talking about an arrest that is too brutal. Here is the full video.” 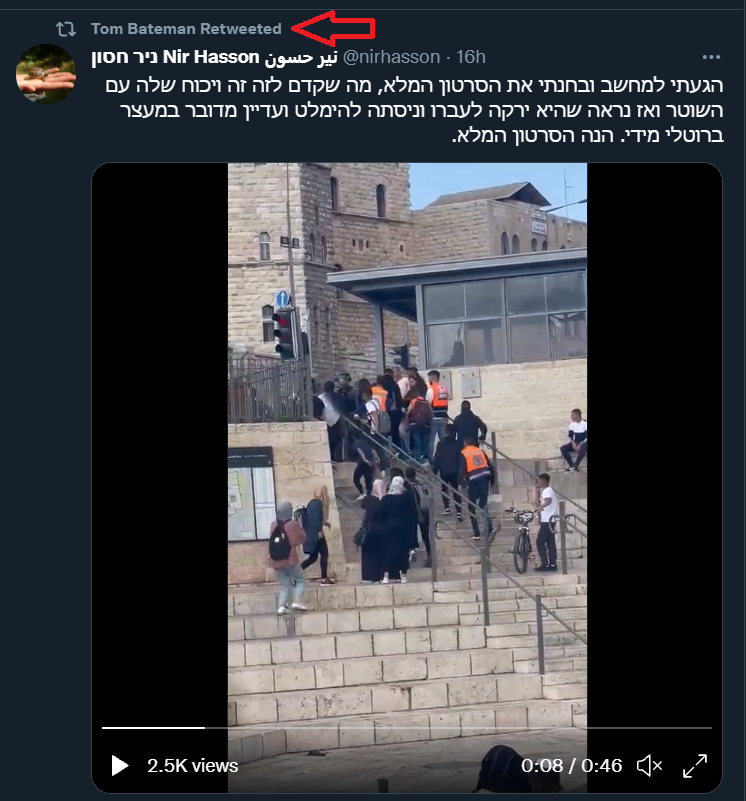 Hasson posted a third Tweet some four and a half hours after his first one: “The police’s response: ‘As can be seen in the documentation, the suspect was arrested after she spit at the policemen. During her arrest she tried to get away and thwart the carrying out of the arrest under the cover of the crowd at the location, hence force was used with the aim of completing the arrest.’”

Bateman did not bother to retweet that response from the police.

The BBC’s approach to coverage of incidents in the UK in which people spat at policemen is evident in several recent reports:

Covid-19: Man jailed for spitting at police officer in Exeter

Covid: Norfolk Police self-isolating after ‘being spat at by teen’

However Tom Bateman failed to provide his nine thousand mostly non-Hebrew speaking followers with the context necessary for understanding the video he retweeted, meaning that as far as they were concerned, this is simply a story about Israeli police violence.

BBC guidance on social media use includes the following:

“All BBC activity on social media, whether it is ‘official’ BBC use or the personal use by BBC staff is subject to the Editorial Guidelines and editorial oversight in the same way that our on platform content is.

We should take particular care about maintaining our impartiality on social media, both in our professional and personal activities

“Where individuals identify themselves as being linked with the BBC, or are programme makers, editorial staff, reporters or presenters primarily associated with the BBC, their activities on social media have the potential to compromise the BBC’s impartiality and to damage its reputation.”

Bateman’s context-free promotion of those Tweets is precisely the kind of careless action which calls the BBC Jerusalem bureau’s impartiality into question.