Last November the BBC produced written and audio reports about the demolition of structures illegally built by Bedouin in the Jordan Valley:

Yolande Knell revisited that story and another one concerning of demolition orders for illegal construction the following month.

In 2018 the BBC produced several items of content about the Bedouin encampment of Khan al Ahmar which was described as “facing demolition”, although in the meantime no demolition has been carried out.

In 2012 a BBC reporter based in Jerusalem produced several reports on “Israeli threat to Bedouin villages”.

A recent Tweet from journalist Khaled Abu Toameh highlights a story that illustrates the level of BBC interest in the demolition of Bedouin-built structures when it is not carried out by Israel. 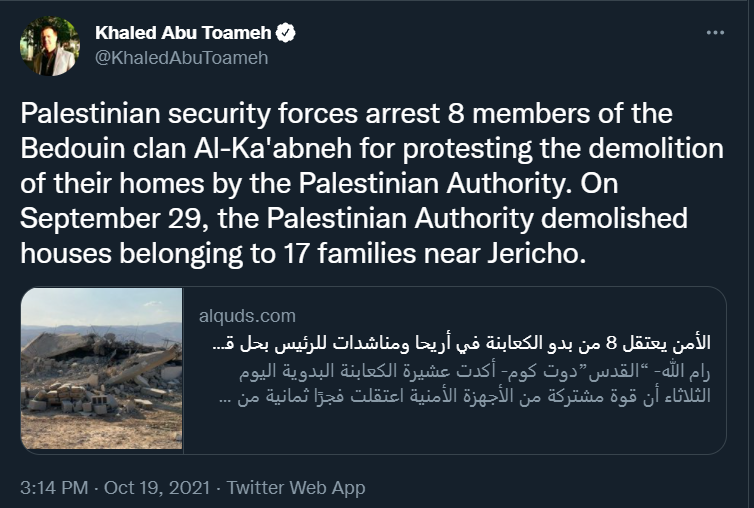 Not only have BBC audiences heard nothing at all about the demolition of seventeen structures apparently housing 110 people in the three weeks since it took place, but the subsequent arrest of eight people has also not received any coverage.

Another story which has not yet been given any coverage by the BBC concerns two people sentenced to death by Hamas.

“Hamas authorities in the Gaza Strip sentenced two men to death on allegations that they had collaborated with Israel, according to Sunday reports.

A Hamas court ordered that the two men, from Khan Younis and Rafah in the southern Gaza Strip, be hanged. […]

The sentences came as a Palestinian Authority court in the West Bank city of Bethlehem sentenced a man to 15 years in prison for attempting to sell land to Jewish Israelis.

Under Palestinian Authority law, selling land to Jews can be a capital offense.”

A visit this week to Israel and the Palestinian Authority by the Swedish foreign minister was not covered by the BBC. Radio Sweden and others have noted that “Ms Linde also points at widespread corruption within Palestinian Authority as an obstacle for Swedish ambitions to help with economic development”.

As has often been observed here in the past, only occasionally do BBC audiences see stand-alone reports concerning internal Palestinian affairs which are not framed within the context of ‘the conflict’ and do not have an Israel-related component. That editorial policy means that the BBC’s funding public gets an overwhelmingly one-dimensional and airbrushed view of Palestinian society.

WHY DID THE BBC DOWNPLAY YEARS OF HAMAS EXTRAJUDICIAL KILLINGS?