On October 22nd Israel’s minister of defence, Benny Gantz, designated six Palestinian NGOs linked to the PFLP (Popular Front for the Liberation of Palestine) terrorist organisation. The Times of Israel report on the story includes the following:

““Those organizations were active under the cover of civil society organizations, but in practice belong and constitute an arm of the [PFLP] leadership, the main activity of which is the liberation of Palestine and destruction of Israel,” Gantz’s office said in a statement. […]

According to the Defense Ministry, all six organizations employed senior PFLP members, “including activists involved in terror activity.”

Taken together, the rights groups are some of the best-known organizations in Palestinian civil society. Many have received considerable funding in grants from European Union member states and the United Nations, among other donors.

Despite the links between the PFLP and some civil society organisations having been known for several years, past BBC content (most recently just last month) has promoted some of those NGOs or featured contributors connected to them. For example:

SERIALISED PROPAGANDA, OMISSION AND INACCURACY ON BBC R4’S ‘BOOK OF THE WEEK’

BBC CONTINUES TO AVOID TELLING AUDIENCES WHAT BDS IS REALLY ABOUT 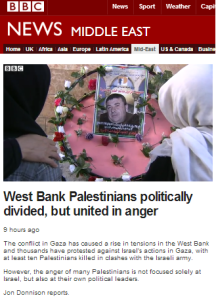 Nearly nine years ago a BBC News website report about a raid on the offices of two of the six NGOs now designated by Israel stated:

“The Israeli military said the NGOs were linked to the Popular Front for the Liberation of Palestine (PFLP), which Israel considers a terrorist group.”

“Some thorough investigative reporting on the part of the BBC into the subject of Palestinian NGOs would do much to advance its audience’s (and its own) understanding of the fact that in the Middle East, “human rights defenders” are not always all they claim to be.”

Nevertheless, we see that BBC journalists have continued to uncritically quote and promote representatives of some of those terror linked NGOs regardless.