The report’s synopsis already frames the story as being about “hard-line Jewish settlers” and “locals” who apparently do not warrant adjectives describing their political positions. 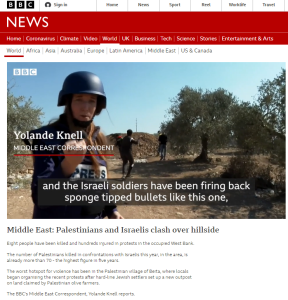 “Eight people have been killed and hundreds injured in protests in the occupied West Bank.

The number of Palestinians killed in confrontations with Israelis this year, in the area, is already more than 70 – the highest figure in five years.

The worst hotspot for violence has been in the Palestinian village of Beita, where locals began organising the recent protests after hard-line Jewish settlers set up a new outpost on land claimed by Palestinian olive farmers.

The report opens with the claim that:

subtitles: “In a bloody year for Palestinians in the West Bank, Beita has seen the worst violence.”

Viewers are not informed that Palestinians from Beita chose to instigate that violence in in May of this year and have continued ever since. As the Times of Israel noted in July:

“Beita’s Palestinian residents have been protesting the establishment of the illegal outpost on a hill — known as Jabal Sbeih — overlooking the town for over two months. […]

Every Friday, Palestinian demonstrators have marched toward Evyatar, hurling stones at Israeli forces and setting tires ablaze. The army has responded with rubber bullets and, occasionally, live fire. […]

After dark, Palestinian “night confusion units” would shine lasers, chant slogans and burn tires in an attempt to irritate the hilltop’s new residents. The tactic was borrowed from a similar strategy used by Gaza-based groups along the border fence with Israel.”

Failing to clarify that although residents of the Evyatar outpost were evacuated on July 2nd the rioting has nevertheless continued, Knell then purports to explain the “target of the Palestinian anger”.

Knell: “These young Palestinians are hurling stones at Israeli soldiers who are up ahead of us and the Israeli soldiers have been firing back sponge tipped bullets like this one. I just picked it up. The real target of the Palestinian anger is those caravans, up there on the hilltop.”

subtitles: “Settlers moved here in May, meters from Palestinians’ olive trees. All settlements are seen as illegal under international law but this one didn’t even have official Israeli approval.”

Viewers are told that “settlers moved here in May” but not why. They are not informed that the unrecognised outpost was first set up in 2013 following the murder of Evyatar Borovsky (after whom it was named) at the nearby Tapuach Junction or that it was soon evacuated by the Israeli military authorities. In early May 2021, following the murder of 19-year-old Yehuda Guetta at the same location (which at the time was barely mentioned by Knell and her colleagues), an attempt was made to re-establish the outpost and two months later an agreement was reached for its evacuation.

Predictably, the BBC inserts its standard partial mantra on ‘international law’ with not even a mention of alternative viewpoints.

Knell: “This is how the weekly demonstrations usually begin, with Friday prayers here on the hillside. Right now the mood is very grim. The settlers left for a while under a deal with the Israeli government but now Palestinians are very worried that they’re going to get a green light to come back.”

Knell does not bother to inform viewers that the reason why “Palestinians are very worried” is presumably because the land survey that was part of the evacuation agreement showed that sixty dunams (15 acres) of the area concerned are state land rather than privately owned land.

Nevertheless, the film goes on to amplify the claims of “Palestinian farmers” without providing that context and without informing audiences that Israel’s High Court of Justice found that such claims of ownership are “speculative”.

subtitles: “Palestinian farmers from Beita say the land belongs to them. Eight people have been killed and hundreds injured in protests.”

Knell: “Down here there are big clouds of tear gas that’s just been fired by the Israeli army; it says it’s reacting to rioting here. And it’s hard to see where all of this ends. I’ve spoken to local Palestinians and to the settlers and neither side is giving up their claims to this rocky hill.”

Whatever one’s views on Israeli communities in Judea & Samaria in general and the Evyatar outpost in particular, it is obvious that Yolande Knell’s afternoon embedded with Palestinian rioters did not yield a report that tells both sides of the story and gives viewers the full range of context and facts required for them to formulate an informed opinion.

Instead – as is all too often the case – Knell’s one-sided report aims to steer the BBC’s worldwide audience towards a blatantly partial view of the subject.

BBC CLAIMS ATTACKS ON ISRAELIS IN JUDEA & SAMARIA ARE “RARE”