On October 18th the BBC Jerusalem bureau’s Tom Bateman produced audio (from 45:23 here) and filmed reports about a photoshoot by American photographer Spencer Tunick near the Dead Sea.

In the audio and televised versions of his report, Bateman’s take-away messaging was that: 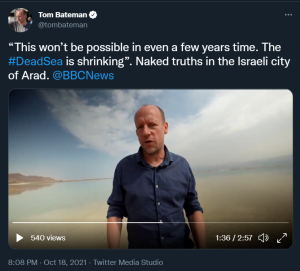 “For now, the art of preserving how much water we all use is the message from this naked attraction.”

BBC audiences were told that the Dead Sea has “been starved of its fresh water supply”.

Bateman: “This expert says it’s entirely a man-made problem with the sea’s sources dammed for farming and drinking water.”

Dr Clive Lipchin: “So since the 1970s there have been large water diversions pumping water out of the Sea of Galilee westwards to Israel and eastwards to Jordan and basically, we’re slowly losing this very unique and one-of-a-kind ecological system.”

While that information is not inaccurate, it does not tell the whole story. As explained in an article last year by Sue Surkes, the problem – like the potential ways to address it – is considerably more complex than Bateman’s reporting suggests.

“Jordan is one of the most water-starved countries in the world. It draws nearly 60 percent of its water from underground aquifers, extracting at twice the rate that the groundwater can be renewed. The rest comes from rivers and streams.

In the capital, Amman, water is supplied to rooftop tanks once a week; other areas of the country are supplied even less frequently.

According to one estimate, Jordan’s water is enough to sustain two million people, in a country that has close to ten million — a figure swelled over the past decade by 1.5 million refugees, most of them fleeing civil war in neighboring Syria.”

The week before Bateman’s reports appeared Israel signed a deal to double the amount of fresh water it supplies to Jordan.

“The two countries agreed then that Israel would sell 50 million cubic meters of water a year to Jordan, doubling what it already supplies. […]

“This is what good neighbors do, in line with Israel’s policy of connections with other countries,” Foreign Minister Yair Lapid said.

Jordan’s cooperation with Israel on water predates their 1994 peace treaty. Israel is also a hot, dry country, but desalination technology has opened opportunities for selling freshwater.

The additional water Israel will provide will come from the Sea of Galilee, said Shaked Eliahu, a spokeswoman for [Energy minister] Elharrar.”

The BBC has yet to inform its audiences of that new agreement between Israel and Jordan. 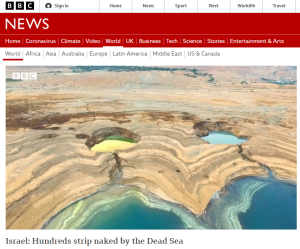 Notably, Bateman’s in vogue cross-platform reports a week later about a photoshoot near the Dead Sea by an American photographer (who flew in specially for the event) that was intended “to highlight environmental change” and “draw attention to its dramatically receding shoreline” failed to make any mention of the relevant subject of the chronic water shortage afflicting Jordan as a contributing factor to the reduction in the amount of fresh water reaching the Dead Sea from the Sea of Galilee.