A Guardian op-ed by Raja Shehadeh, founder of the Palestinian NGO Al-Haq, recently labeled a terrorist group by Israel because “it operates on behalf of the Popular Front [PFLP]”, didn’t even attempt to address the specific charges leveled against the group.  Instead, Shehadeh’s piece (“By banning six Palestinian NGOs, Israel has entered a new era of impunity”, Oct. 28) characterises charges against Al-Haq as “patently untrue”, without elaborating, whilst spending most of the column attacking Israel. 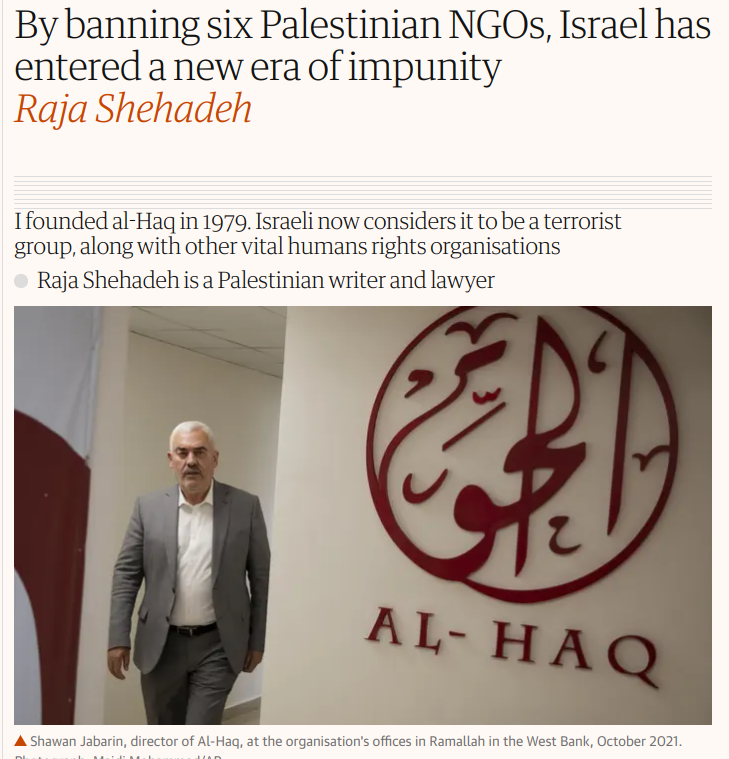 First, the group in question, (Iranian backed) Popular Front for the Liberation of Palestine (PFLP), seeks Israel’s destruction, is designated by the US, EU, Canada, Japan and Israel as a terrorist organisation, and has carried out scores of deadly attacks over the years, including suicide bombings and the murder of an Israeli minister. More recent PFLP attacks include a 2011 incident in Itamar, in which Ehud and Ruth Fogel, and three of their six children – including an infant – were savagely murdered in their home; the 2014 massacre of worshipers in a Jerusalem synagogue which killed six; and a 2019 West Bank bombing which killed 17 year-old Rina Shnerb.

As we reported in a post last week in response to an article by the Guardian’s Harriet Sherwood, even leaving aside the evidence gathered by Israel’s intelligence agencies, the open-source information (at NGO Monitor) about Al-Haq – and the other proscribed NGOs – is damning, and begins with the man seen in the Guardian photo above, Al-Haq’s director Shawan Jabarin.

Other Al-Haq employees who’ve been involved with, or arrested for, PFLP activitie include Ziyad Muhammad Shehadeh Hmeidan, Zahi Abdul Hadi Muhammad Jaradat and Majed Omar Daud Abbadi.  Further, as journalist Benny Avni noted recently in the Wall Street Journal, details on overlapping membership, headquarters-sharing, and joint fundraising between the PFLP and the six proscribed groups, including Al-Haq, has been documented in the Israeli press for years.

Finally, let’s recall that charges that Al-Haq is a terror front is not at all new. In May 2018, Visa, Mastercard, and American Express shut down online credit card donations to Al-Haq (and other recently proscribed NGOs) due to their PFLP ties.  In fact, NGO Monitor has been documenting these groups’ ties to PFLP since 2007!

Al-Haq is one the many NGOs operating in the region which media outlets dutifully frame as “progressive” “human rights” groups, whilst ignoring easily obtainable evidence demonstrating that their true mission is decidedly regressive, including support for racist violence in the service of eliminating the world’s only Jewish state.