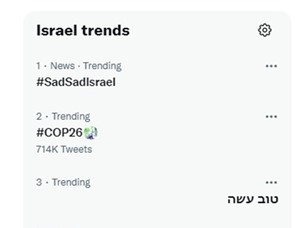 The New York Times has found itself at the center of widespread online mockery after depicting Israelis and their country in overwhelmingly gloomy language—despite Israel consistently ranking among the happiest countries in global surveys.

The October 26 story, “Whose Promised Land? A Journey into a Divided Israel,” by the paper’s Jerusalem bureau chief Patrick Kingsley, promised to show readers “what it means to be Israeli today,” but his report prompted laughter in Israeli society.

Israelis are now ridiculing the Times’s report by tweeting happy photos of themselves—at weddings, on hikes, at bars, on beaches, at concerts, in restaurants, enjoying family and friends—with the satirical hashtag #SadSadIsrael, which quickly shot to the number one slot for trending hashtags in the country.

“The Times’s article seemed to be asking for ridicule,” said CAMERA analyst Gilead Ini, who first posted the #SadSadIsrael hashtag after writing a widely read critique of the Times’s report. “After ten days of traveling throughout the country, Kingsley somehow only stumbled upon Israelis who viewed their country as a land of ‘tensions,’ ‘inequities,’ ‘divisions,’ ‘unrest,’ ‘fury,’ ‘ambivalence,’ ‘illegitimacy,’ ‘alienation,’ ‘injustice,’ ‘discrimination,’ ‘bias,’ and ‘abuse,’ with ‘shabby,’ ‘tired,’ and ‘garish’ towns—and hardly a bright spot to be found. It’s actually pretty hilarious.”

Judging by the overwhelming response in Israel to CAMERA’s social media campaign, Israelis from across the political spectrum seem to agree.

Like Loading...
Tags from the story
Delegitimization, Israel, New York Times, Patrick Kingsley, Uncategorized
Written By
Guest Post
More from Guest Post
Written by David Collier It has long been known that the Guardian...
Read More