Guardian readers are immediately misled in the headline, strap line and opening sentence of a Nov. 5th article by their diplomatic editor Patrick Wintour. 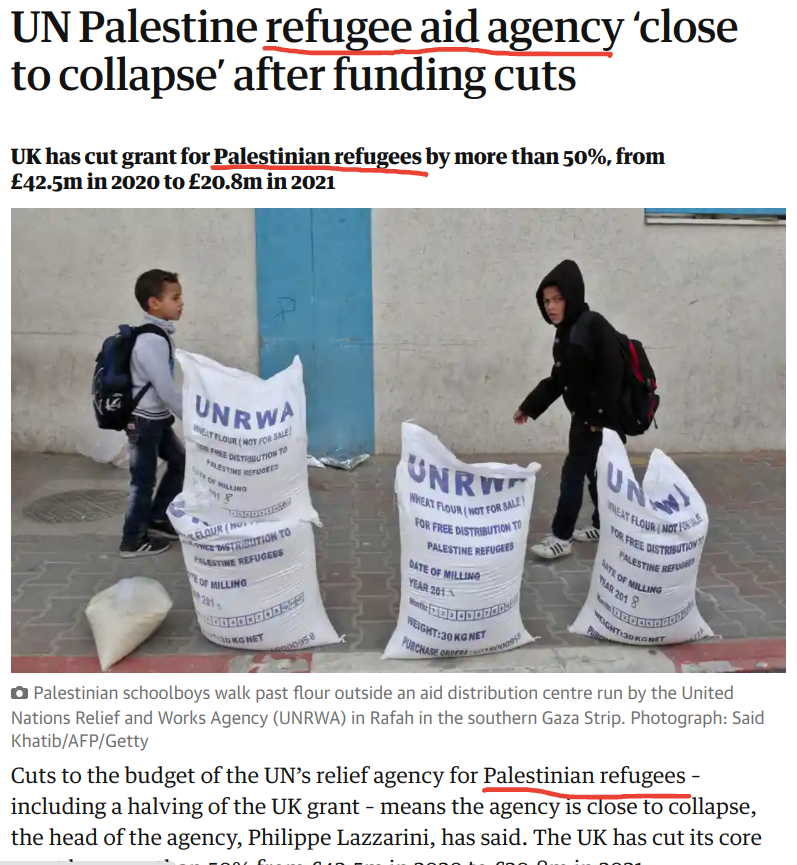 It’s only in the fourth paragraph that the Guardian even alludes to the fact that UNRWA doesn’t merely help actual Palestinian “refugees” from 1948, but Palestinian refugees and “their descendants”.

The UK was the third largest overall donor to UNRWA in 2020, but its latest cut starts to put the UK in the second tier of contributors. The agency operates about 700 schools catering for 550,000 children, and provides health centres and social welfare to Palestinian refugees and their descendants.

But, as we’ve noted countless times, the descendants of refugees reportedly make up over 99% of the five million plus Palestinians assisted by UNRWA – a fact that the Guardian always obfuscates.  In no other situation in the world are mere descendants of refugees  granted (in perpetuity) the same status as actual refugees.  Whereas Palestinians granted refugee status are assisted by UNRWA, the rest of the world’s refugees are assisted by the UN High Commissioner for Refugees (UNHCR).  Whilst UNRWA head Lazzarini is quoted in the Guardian denying that the organisation was bloated, UN Watch’s Hillel Neuer pointed out the following:

Naturally, the Guardian journalist failed to ask Lazzarini why millions of people of Palestinian descent who are not refugees and enjoy full citizenship in other states should be considered “refugees” and granted aid from his agency.

Further into the article, the Guardian briefly notes that UNRWA has “faced by repeated criticism of anti-Israeli bias in the school curriculum”, and then accept’s Lazzarini’s weak denial of this ‘accusation’ at face value.  The journalist fails to explain that President Biden’s restoration of the UNRWA aid – which was cut by the previous admistration – was specifically made contingent upon UNRWA implementing reforms, such as “combating incitement and antisemitism in its educational curriculum” and assuring that their “facilities are not used by terrorist organizations and its staff are not affiliated with them”.

In fact, earlier in the year, the watchdog group IMPACT-se’s report found that UNRWA educational materials have depicted Jews as “enemies of Islam”, include “mathematics problems using martyrs from the First Intifada to calculate equations”, and implore students “defend the motherland with blood”.  The organisation also showed that UNRWA materials characterise Dalal Mughrabi, who took part in the 1978 Coastal Road Massacre, which killed 38 civilians, 13 of them children, as a role model.  Further, in August, UN Watch exposed more than 100 teachers, principals and other employees that share extreme antisemitic material, including praise for Adolf Hitler, and support terrorist attacks against Israeli civilians, on social media.

Another report released in June financed by the European Union similarly found antisemitism in UNRWA educational materials. “Jews” the report documented, are often “demonised”, portrayed as “dangerous and deceptive” and as Muslims’ “primary adversaries” who “attempted to kill the Prophet”.

The Guardian report omitted all of this easily available evidence – representing another example of how, regardless of the facts, the media outlet insists on adopting the pro-Palestinian narrative whilst obfuscating the myriad of evidence documenting their society’s continuous glorification of violence and endemic anti-Jewish racism.

Palestinian Schools Have a Problem—and Are Running Out of Time