The BBC News website’s live page has been dominated by the COP26 UN climate conference in recent days. One of the items which appeared on that page on November 3rd was also posted in the ‘updates’ section of the ‘Middle East’ page. 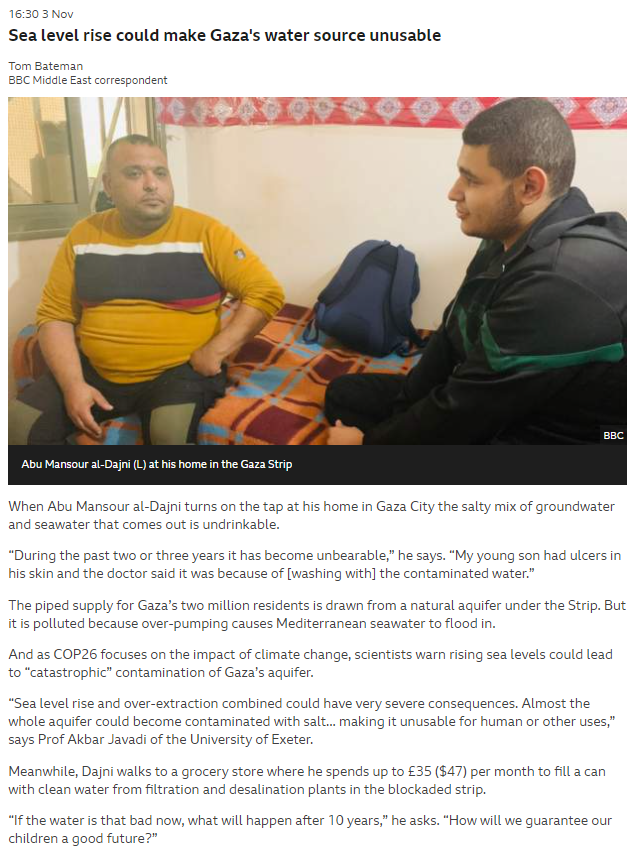 As we see, the BBC Jerusalem bureau’s Tom Bateman correctly states that the coastal aquifer is polluted “because over-pumping causes Mediterranean seawater to flood in”. Subsequently readers encounter the apparently reflexive use of the word “blockaded” even though it has nothing to do with the item’s topic.

“Meanwhile, Dajni walks to a grocery store where he spends up to £35 ($47) per month to fill a can with clean water from filtration and desalination plants in the blockaded strip.”

BBC audiences have in the past been erroneously but repeatedly led to believe that there is a connection between the counter-terrorism measures imposed by Israel and Egypt on the Gaza Strip since its violent take-over by Hamas in 2007 and the shortage of clean drinking water there. For example:

“Gaza is about 360 kilometers. It’s closed from all sides [sic] by the Israeli occupation. They prevent export, import, free access. Prevent us from even having fresh air, fresh water, electricity. Everything is closed.” BBC World Service radio, 21/7/2018

“…you’re saying that Israel’s besieging tactics in Gaza – the fact that Gaza doesn’t really have power supplies that work, it doesn’t have clean water, it has a jobless rate of 60% or more – you’re saying all of this isn’t tough enough; that Israel should be hammering Gaza harder. Is that it?” ‘Hardtalk’ 23/11/2018

“Gaza’s economy has been badly hit by a blockade by Israel and Egypt – needed, they say – for security reasons.

The blockade was tightened after Hamas took full control of Gaza more than a decade ago. Hamas is considered a terrorist organisation by Israel, the United States and many Western governments.

“The basic hygiene, sanitation services, presence of water – more than 96% of water in Gaza is unfit for consumption. This is the result of Israeli targeting of sewage treatment plants, water sanitation plants that make basic life in Gaza quite difficult.” BBC World Service radio, 13/8/2020

“Now, we head to the Gaza Strip where the past few months have seen a further deterioration in the state of Palestinians in the area. The blockade by Israel has meant a lack of clean drinking water, the electricity supply is intermittent, unemployment is high and even sick patients have to apply for exit permits before being allowed to leave the territory for medical treatment.” BBC World Service radio, 4/10/2021

However a document jointly produced by the INSS and EcoPeace in 2017 ( and updated in 2018) explains the process that led to the current situation as described by Bateman.

“The coastal aquifer, which is located under the coastal plain of Israel and the Gaza Strip, is the only source of natural water in Gaza. Due to rapid population growth, which in the last decade increased from nearly 1.5 million in 2007 to more than 2 million today, the demand for water in the Gaza Strip has surged. The increased water needs alongside the scarcity of alternative sources of water have led to the extreme overuse of the aquifer. While the renewable extraction rate for Gaza’s underground aquifer is about 60 million cubic meters of rainwater annually, Palestinians in Gaza have been drawing an estimated 200 million cubic meters a year for over a decade, leading to the infiltration of seawater into the aquifer, and therefore raising the levels of salinity far beyond WHO health regulations. […]

Gaza’s groundwater has also been extensively contaminated by sewage. The discharge of untreated sewage generated by the two million inhabitants into shallow ponds – which eventually percolates into the aquifer – has caused alarming levels of Nitrate (NO3). […]

In June 2019 it was reported that Israel was supplying 11.5 million cubic litres of water per annum to the Gaza Strip.

With the BBC Jerusalem bureau finally having acknowledged that the chronic shortage of clean water in the Gaza Strip is due to more than a decade of over-extraction prompted by a sharp increase in population, it remains to be seen whether we can look forward to an end to years of BBC promotion of unchallenged misinformation on that topic.

GAZA STRIP BACKGROUND THE BBC DOES NOT PROVIDE