As noted here recently, last month Israel’s Supreme Court proposed a compromise to the families involved in the long-running Sheikh Jarrah property dispute that would allow them to stay in their homes for at least fifteen years.

“During that time the issue of land ownership could be adjudicated, but in the interim, the court would recognize the families as protects tenants and the Jewish-owned Nahalat Shimon company as the owners of the property.

As protected tenants, the families would have the right to make repairs or renovations to the property. They would be required to pay rent biennially in the sum of NIS 2,400. […]

The three judges – Yitzhak Amit, Noam Sohlberg, and Daphne Barak-Erez – said that their decision was not binding and gave both sides until November 2nd to reply to the offer.

The judges said they would accept any amended compromise agreed upon by both sides.

They warned, however, that should the compromise be rejected, they would issue a binding ruling.”

Some of the residents of Sheikh Jarrah saw fit to discuss the matter with Hamas leader Ismail Haniyeh on October 26th.

“On Tuesday, Haniyeh, who is based in Qatar, received a phone call from the residents of Sheikh Jarrah, who briefed him on the latest developments surrounding the dispute, according to a report by the Hamas-affiliated Palestine Information Center.

The report did not name the residents who called Haniyeh. […]

“Haniyeh told the people of Sheikh Jarrah: ‘You are not alone, your people are with you, your resistance is with you,’” the report said.

Haniyeh was quoted as saying that the Israeli courts “are trying to impose Jewish prayers at al-Aqsa Mosque” and expel the families from their homes in Sheikh Jarrah.”

The Hamas leader was also quoted as saying: “We will not allow the occupation courts to extract through deception what they were unable to extract through war, so you do not need to deal with its offers, as it (Israel) is an illegal entity on our land, and we do not expect justice and fairness from it.””

On November 2nd seven families were reported to have accepted the proposed compromise while four rejected it. Palestinian Authority officials apparently later arrived in Sheikh Jarrah, with predictable results. 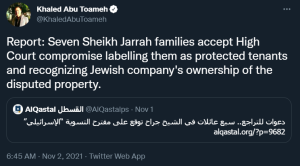 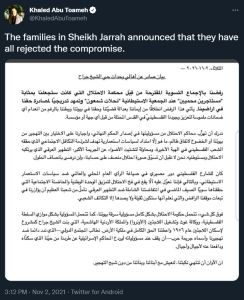 In early May of this year the BBC began promoting a one-sided narrative concerning “the threatened eviction of Palestinian families” which consistently failed to provide audiences with the full details of the decades long Sheikh Jarrah property dispute. When Hamas exploited that dispute as an excuse to spark conflict on May 10th, the BBC adopted and promoted the terror group’s narrative. In early August BBC audiences were provided with multi–platform coverage (some pre-emptive) of a court session that had been postponed.

It is hence all the more remarkable that the BBC has to date totally ignored the November 2nd rejection of the proposed compromise by the families at the centre of its previously extensive coverage – and not least the involvement of Hamas and the Palestinian Authority in that rejection.

Some of the families concerned obviously realised that it was in their best interest to accept the proposed compromise but were pressured to reject fifteen years of security, minimal rent and upgraded protected tenant status by parties keen to retain them as a political card to be used at their convenience to incite tension and violence.

That of course is an important side of this story that BBC audiences are unlikely to be told.