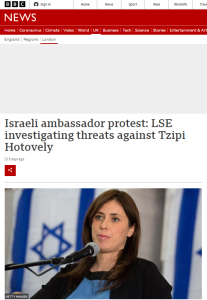 On November 11th a follow-up report by Karishma Patel of the BBC Asian Network was published on the same regional page under the headline ‘Israeli ambassador LSE debate: Organiser says protest has been mischaracterised’.

Neither of those reports appeared on the BBC News website’s ‘Middle East’ page but they were posted in its ‘updates’ section. An Arabic language version of the earlier report was published on the BBC Arabic website.

The events outside the London School of Economics that are the topic of both those reports are described in vague terms.

“Footage on social media shows protesters shouting and rushing up to Ms Hotovely as she left the university. […]

Ms Hotovely’s speech lasted approximately 90 minutes, and “attracted some protest outside” according to the LSE.

She then took questions before “leaving on schedule”.

An LSE spokesman said: “Free speech and freedom of expression underpins everything we do at LSE.

“Intimidation or threats of violence are completely unacceptable.

“We are aware of some threats of violence made on social media around this event. Any LSE students identified as being involved in making such threats will face disciplinary action.””

Social media footage showed protesters rushing up to Ms Hotovely as security staff escorted her to her car. Some were heard booing and shouting “shame on you”. […]

The now unavailable Instagram account, which for reasons unknown is described by the BBC as “anonymous”, goes under the name ‘LSE Class War’. The BBC did not bother to inform readers that the post urged people to smash the window of Ms Hotovely’s car and “f…ing frighten her”. Another post from the same account claimed that the group was “storming in” and urged followers to “make her [the Israeli ambassador] shake”.

Although impossible to discern from the BBC’s tepid accounts, anarchists bent on intimidation were not the only ones present at that ‘protest’. While both reports are tagged ‘Israel & the Palestinians’, the BBC failed to note the abundance of Palestinian flags outside the venue.

In addition, as reported by the Jewish Chronicle and others:

“Outside of the event, the crowd was addressed by Massoud Shadjereh, of the Islamic Human Rights Commission and organiser of the annual Quds Day demonstration.

He told protesters: “Zionism will never be a legitimate ideal in our spaces.”

He added: “This type of person is very dangerous, this is almost, almost the same concert as Holocaust denial, denying the atrocities that are taking place right now…”

The crowd chanted: “From the river to the sea, Palestine will be free,” and cheered the Palestinian flag.”

The CST and others have noted that:

“At the demonstration outside LSE last night, flags for the Iran-backed, Iraqi Shia paramilitary group Kata’ib Hezbollah — whose leader was killed alongside Mr Soleimani by an American missile last year — were waved behind Mr Shadjareh while he spoke.”

Others also noted the use of placards featuring a pro-Iran group called ‘Innovative Minds’.

Despite all that, the BBC’s second report chose to amplify the talking points of the LSE debate society’s vice-president: 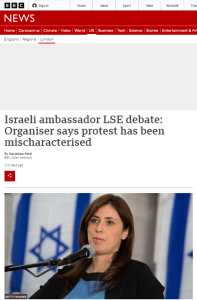 “A student organiser of a debate with the Israeli ambassador at the London School of Economics (LSE) has accused politicians of “mischaracterising” protests outside the event. […]

But Abhijith Subramanian called the booing “freedom of speech”. […]

Mr Subramanian said: “She had a few uncomfortable moments getting into her car because people were booing but that’s just freedom of speech. […]

However, Mr Subramanian said he did not hear any anti-Semitism from the crowd.

“I didn’t hear everything but most protesters were against Israel’s policies or the debating society rather than the ambassador’s religion,” he said.” [emphasis added]

Happily for Mr Subramanian, he still has time as a second-year student of international relations to gain better understanding of antisemitism and anti-Zionism in general and the meaning of the chant ‘from the river to the sea, Palestine will be free’ in particular. It is however obvious that the BBC could easily have found a more qualified commentator on that topic.

It is also clear that the BBC’s reporting on this topic fails to provide its funding public with even minimal information concerning the groups and individuals behind this Hamas praised ‘protest’, not least the IHRC and Massoud Shadjareh.

Finally, both these reports refer to Husam Zomlot as “the Palestinian ambassador to the UK” despite the fact that the BBC has previously acknowledged that he “is not strictly speaking an ambassador” and that “the UK does not recognise Palestine as a state”.