A post at Bari Weiss’s Substack blog announced that a new university would be opening, the aim of which is to fight back against cancel culture and the corresponding assault on free speech, academic freedom, civil discourse and liberalism within American higher education.  The new institution is dedicated to the proposition that the pursuit of truth should be the central aim of any university – not ideological uniformity in the service of advancing radical and illiberal agendas.

Weiss is among the founding trustees of the new university.

It didn’t occur to us that the Palestinian issue had anything to do with the new academic venture.  But, according to Brooklyn College professor and Guardian columnist Moustafa Bayoumi, we were wrong.  His Nov. 12th op-ed is based on the premise that pro-Palestinian academics are ‘silenced’ at American universities, and that pro-Palestinian voices are the ones being cancelled. 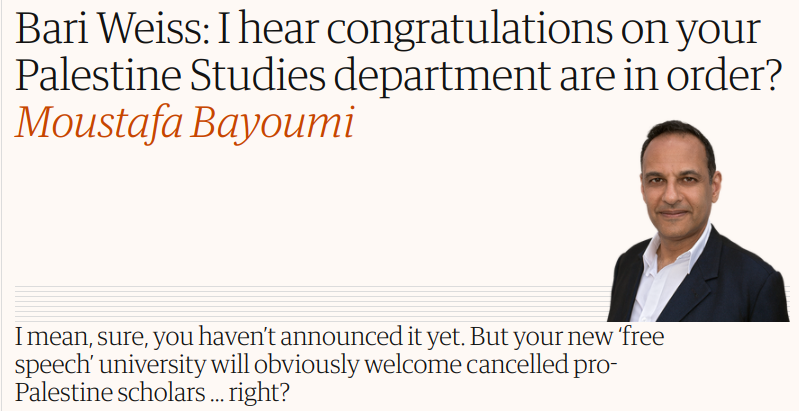 The evidence he cites is full of holes.

A few years ago, for example, one of the world’s most recognized philosophers, Judith Butler, came to my campus in Brooklyn with a highly respected Palestinian activist, Omar Barghouti, as part of a national speaking tour….Not only was my college then subject to extraordinary outside pressure to call off the event, but members of New York’s city council even threatened to withhold funding to the campus if the event proceeded

However, he then concedes that the event wasn’t cancelled, and Barghouti gave his speech at the college.

Bayoumi’s next example of a pro-Palestinian voice being ‘cancelled’ is the denial of tenure to DePaul University Professor Norman Finkelstein in 2007.  He claims that “Israel-aligned Harvard professor Alan Dershowitz aggressively lobbied the university to deny the younger professor his job”, but fails to cite evidence that the criticism of Finkelstein by Dershowitz – who’s not affiliated with DePaul University – had anything to do with his not getting tenure.

DePaul fiercely rejected the suggestion that outside pressure had anything to with their decision, and there is ample evidence that the decision was based on criticism of the quality of Finkelstein’s scholarship.

Bayoumi then cites the case of Steven Salaita, who was denied a tenured professorship at the University of Illinois due to objections raised over what he describes as tweets “criticizing Israel”.  However, as we noted in a recent post, Salaita’s tweets were not merely ‘critical’ of Israel.  They were explicitly antisemitic. 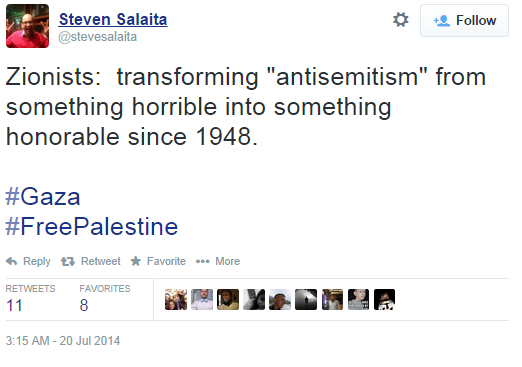 Bayoumi then writes that, “from 2014 to 2020, the organization Palestine Legal has documented 1,707 incidents of suppression of speech concerning Palestine in the USA”.  This is extraordinarily deceptive.

If you read Palestine Legal’s reports, their numbers are mainly incidents involving mere criticism of Palestinian activism or events.  In the overwhelming majority of the cases we reviewed in their annual reports, few pro-Palestinian student or academic (or conference) were actually ‘cancelled’.  One of the few exceptions involves their complaint that university events featuring Leila Khaled (an unrepentant PFLP terrorist), who they refer to as merely an “activist”, were cancelled by tech companies such as Zoom who were merely abiding by anti-terrorism laws.

More broadly, if anything, the Guardian op-ed’s complaint that academia isn’t sufficiently open to pro-Palestinian advocacy is the opposite of the truth.  Earlier this year, the AMCHA Initiative published a report documenting 218 professors identifying themselves as Middle East scholars who signed petitions calling for the academic boycott of Israel.

During the recent war between Israel and Hamas, there were scores of academic departments that endorsed solidarity with Palestinians.  Such statements were endorsed by 130 gender studies departments, 10 gender studies centers and three associations, including the National Women’s Studies Association. The National Women’s Studies Association also released a separate statement affirming Palestinian solidarity “as a feminist issue.” Other academic associations that have issued statements include the American Anthropological Association and the board of the Middle East Studies Association.  Most statements used demonising rhetoric about Israel, whilst hardly any included a word about the antisemitic terror group Hamas.

Let’s also remember that there are over 140 active Students for Justice in Palestine (SJP) chapters on college campuses across the country, whilst dozens of pro-BDS resolutions are proposed on campuses each year by groups such as SJP.

If there’s an effort to squelch pro-Palestinian activism on US college campus, it’s clearly failing miserably.

But, it’s towards the end of his piece, that Bayoumi pivots to his real target – Bari Weiss herself.

In fact, I must say that I’m most especially pleased that one of the founders of your enterprise, Bari Weiss, is so devoted to open inquiry and free speech, especially since she has a well-known history of trying to squelch – dare I say “cancel” – Palestinians.

This history began when she was an undergraduate at Columbia University. There, she led a campaign that accused a group of professors of bias against Jewish students, and even assisted in a documentary on that theme.

The charge that Weiss, whilst a student at Columbia, “squelched” Palestinian speech is baseless.

As an undergraduate, she founded Columbians for Academic Freedom, motivated by what she and other Jewish students felt was an “atmosphere of intellectual orthodoxy creat[ing] an environment where dissenters” against professors’ anti-Israel orthodox “are turned into pariahs.”  As she commented elsewhere, merely criticising professors such as Joseph Massad – who she and others accused of stifling pro-Israel voices – is the opposite of cancel culture. (You can see the film at the centre of the Columbia row, called Columbia Unbecoming, here.)

If you read an article she wrote at the time at the Columbia Spectator, her campaign was inspired by a devotion to free speech, academic freedom and open debate – ideals she felt were being violated by some professors.

Weiss actually penned a post for CAMERA in 2005 providing more information on the campaign.  Here’s a brief excerpt:

Among the most publicized cases included was Professor Joseph Massad’s response to a student’s suggestion that the Israeli army warns Palestinians before taking out a terrorist target. Massad shot back, “Get out of my classroom if you deny Israeli atrocities!”

In an off campus lecture, Professor Massad asked Tomy Schoenfeld, an Israeli student who had served in the army, “How many Palestinians have you killed?”

Just as professors have the right to their political position, every student_conservative and radical, Republican and Democrat, has the right to dissent in the classroom without fear of intimidation or grade retribution. Perhaps even more than having the right to dissent, students are responsible to challenge their peers and their professors, for universities were never meant to be echo chambers.

Weiss was defending the right – of pro-Israel students and others – to dissent in the classroom.

To those of us who’ve followed Weiss’s career, including her departure from the NY Times after being bullied by peers for her heterodox views, and her blog and podcast, the words she expressed then in defence of free speech and liberalism are consistent with her uncompromising defence of such values today.   In fact, on the first episode of her new podcast, she came to the defence of a Palestinian-American grocery store owner named Majdi Wadi, who was a victim of cancel culture after racist tweets by his teenage daughter, including some that were antisemitic, were exposed.

As for Bayoumi? Well, in 2014, he expressed support for a boycott of Israeli academic institutions – a movement that’s antithetical to the principle academic freedom.

Whilst Bayoumi failed to cite even one example of Weiss cancelling a Palestinian, he supports a movement that would, in effect, cancel thousands of Israeli academics, demonstrating that, when it comes to defending academic freedom, it’s the Guardian columnist, and not Bari Weiss, who’s the hypocrite.