In August the BBC promoted cross-platform reports by the BBC Jerusalem bureau’s Yolande Knell promoting the allegation that Israel’s police force does not do enough to tackle crime within the Arab sector:

In one of those reports Knell wrote:

“Bereaved families and Arab officials claim that police inaction is one of the main reasons for the endemic violence plaguing their neighbourhoods.”

“The cabinet also backed a national plan to deal with spiralling crime and violence in the Arab sector. This year alone more than 100 Israeli Arabs have been killed in attacks by other members of their community.

Bereaved families and Arab officials claim that police inaction is one of the main reasons, while the police say investigations are often hampered by a lack of co-operation and trust.”

“Bereaved families and Arab officials claim that police inaction is one of the main reasons for the high murder rate, while the police say investigations are often hampered by a lack of co-operation and trust.”

However that report – headlined “Israeli police arrest 65 Arabs over illegal arms dealing” – concerns a story which contradicts such claims of “police inaction”. 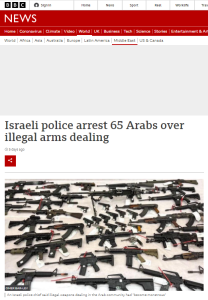 “Israeli police have arrested 65 Israeli Arabs on suspicion of illegal arms dealing in what they say was the biggest ever operation of its kind. […]

A former criminal recruited as an undercover agent bought dozens of weapons, including 25 M16 rifles, a machine gun and an anti-tank missile.”

The BBC’s report did not clarify to readers that the undercover operation had been going on for a year or that it involved the use of no small amount of public funds.

“The undercover operative, a former criminal who switched sides, spent his time as a member of an organized crime group that provides weapons for “the big bosses” in the criminal underworld, police said.

He was enlisted in August 2020 and started operating by November last year. Over the past year, acting in his undercover role, he purchased 53 weapons in 48 deals, including two explosive devices that could be set off using a cellphone. […]

Neither does the BBC’s report make any mention of the sources of the weapons seized:

“Investigators believe most of the weapons came from the West Bank and were smuggled into the country from Lebanon and Jordan. The rest were stolen from Israeli army bases.”

Speaking after news of the arrests had been made public, Israel’s police commissioner stated that nearly 90% of police resources are currently directed towards the Arab sector. In addition to tackling the issue of illegal weapons, police activity has also focused on drug-related crimes, tax evasion, organised crime and additional issues. At a recent Knesset committee meeting, the Head of the Directorate for the Development of Policing Services for the Arab Israeli Population, Major General Jamal Hakroosh, reported that:

“There is a 32% increase in weapons seizures, and a 24% increase in arrests of people suspected of arms possession and trade. We are also working on prevention of murders, by carrying out conflict resolution so that it doesn’t reach that point. There are 27 cases of disputes that we resolved and prevented murders. These aren’t sulha cases, we have expertise, and we deal with each case according to the circumstances.”

Although the claim of “police inaction” that BBC journalists have been copy-pasting for the past three months is clearly redundant, the corporation nevertheless continues to steer its audiences towards that narrative.