One issue that we have repeatedly had cause to document over the years is the BBC’s unquestioning amplification of the ‘apartheid’ smear against Israel.

Proponents of that method of deliberate delegitimisation are frequently quoted and promoted in cross-platform BBC content, with no information provided about their political agendas and how those aims are served by the mainstreaming of the ‘apartheid’ trope.

At best, BBC audiences will see the ‘impartiality box’ grudgingly ticked with a one-liner along the lines of ‘Israel rejects any comparison to apartheid South Africa’. What BBC audiences never see, however, is an explanation in the corporation’s own words as to why the apartheid smear tactic employed by supporters of the anti-Israel Boycott, Divestment and Sanctions (BDS) campaign and others is actually invalid.

Examples from the past year alone include:

It was therefore not in the least surprising to see that editorial policy on display yet again in a recent report titled “State withdraws support for Miss SA in Israel” which was promoted on the BBC News website’s ‘Africa live’, ‘Africa’ and ‘Middle East’ pages on November 15th. 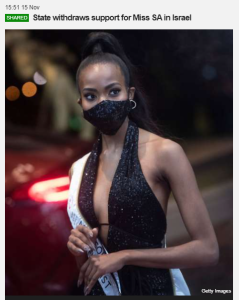 “The government in South Africa has withdrawn support for Miss South Africa in the Miss Universe contest to be held in Israel. […]

Those opposing South Africa’s participation in the contest are protesting against Israel’s alleged committing of atrocities against Palestinians.

South African campaigners say they have lived under apartheid and therefore cannot support what is going on in Israel.

In a statement, South Africa’s arts and culture ministry said that “the atrocities committed by Israel against Palestinians are well documented” and it could not “in good conscience associate itself with such”.

Israel has in the past denied committing atrocities and rejects accusations that its treatment of Palestinians amounts to apartheid. […] ”

As we see, readers were not told what the “atrocities” mentioned three times in the 180-word report are supposed to be, let alone whether or not there is any substance to that allegation. Neither are readers informed who “those opposing South Africa’s participation” and “South African campaigners” actually are or what is their political agenda. Ha’aretz, for example, reported that:

BBC audiences are not told that South Africa ‘downgraded’ its relations with Israel in 2019 after having recalled its ambassador the previous year over the Hamas-initiated ‘Great Return March‘.

The BBC’s box-ticking insert referring to Israel having “denied” and ‘rejected’ allegations fails to clarify to readers that comparisons between Israel and the former South African regime are rejected by many, not only in Israel.

And yet again, the BBC makes no effort to explain to audiences why anti-Israel campaigners, including supporters of the BDS campaign which opposes Jewish self-determination, use the ‘apartheid’ smear to further their cause.

The result is that, once again, we find the BBC unquestioningly amplifying and mainstreaming a trope resurrected two decades ago at the controversial Durban conference with the intention of delegitimising Israel as a pariah state that has no right to exist.

Apparently, BBC editors see no problem with that.