The BBC News website’s coverage of the terror attack in Jerusalem on the morning of November 21st came in the form of a report with a headline that avoids informing readers that the “gunman” was a Palestinian and his victims were Israeli: “Jerusalem shooting: Gunman kills one and wounds three in Old City”. 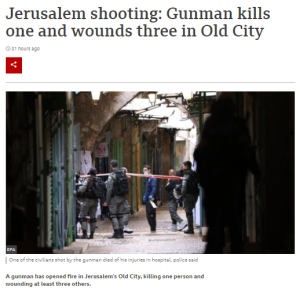 The headline is also inaccurate with regard to the number of people wounded: two civilians and two members of the security forces were injured.

Despite the story being about the deliberate targeting of civilians in an act of terror, the BBC uses its standard euphemism “militant” to describe the group to which the attacker belonged.

“The gunman, who officials identified as a member of the Palestinian militant group, Hamas, was shot dead by Israeli security forces.”

The report again promotes the myth of separate ‘wings’ to Hamas.

“A spokesman for Hamas confirmed the man – named in Palestinian and Israeli media as Fadi Abu Shkhaydam – was a member of the group’s political wing.”

The BBC does not name the person murdered by the Hamas terrorist in its report – Eli Kay – even though that information had been available for over two hours by the time the amended version that is currently available online was published.

Neither has the report been updated to inform BBC audiences of the displays of support for the terrorist seen in the Jerusalem neighbourhood of Shuafat.

“Violent knife attacks are a regular occurrence in Jerusalem, but gun attacks of this type are rare.”

“Rare” is of course a relative term and that claim ignores attacks that have been prevented due to counter-terrorism measures and policing. Serious shooting attacks in Jerusalem in recent years have includes those at the Har Nof Synagogue, on a bus in Talpiot, on Temple Mount and at Ammunition Hill.

As ever, the BBC’s idea of ‘context’ to the story erases all history prior to June 1967, including the 19-year Jordanian occupation of parts of Jerusalem.

The current version of the BBC’s report includes analysis from the BBC Jerusalem bureau’s Tom Bateman in which he promotes Hamas talking points concerning Sheikh Jarrah and Silwan.

“Meanwhile, Hamas in its statement appeared to link it [the terror attack] to neighbourhoods of East Jerusalem where Palestinians have been facing the threat of eviction or home demolition by Israel.”

The statement to which Bateman refers was reported by local media as follows:

“Hamas quickly took responsibility for the attack, saying it was the “price” for Israel’s actions in Jerusalem.

“The message of the heroic operation is a warning to the criminal enemy and its government to stop the attacks on our land and our holy sites. [Israel] will pay a price for the iniquities it commits against Al-Aqsa Mosque, Silwan, Sheikh Jarrah and elsewhere,” the terror group said.”

Back in August we noted the BBC’s adoption of the Hamas narrative concerning the factors that supposedly led to the May hostilities. As we see, six months on Tom Bateman is still uncritically promoting the Hamas narrative according to which terrorism against Israeli civilians is ‘explained’ – or even justified – by alleged events in Jerusalem which BBC audiences have seen covered in a consistently partial manner.

Bateman: “He [the terrorist] was a member of Hamas – the militant group – they’ve confirmed that. They describe this as an operation they said that…err…in their view was Israel paying the price for what it described as its crimes in Jerusalem.”

Interestingly, the same claim concerning “quite rare” shooting attacks in Jerusalem was also made by the programme presenter Julian Marshall, indicating that this is another of Bateman’s chosen talking points.

Marshall: “I mean knife attacks by Palestinians in Jerusalem occur pretty regularly but using a gun as in this morning’s incident is quite rare, is it not, Tom?”

Bateman’s reply to that question included mention of a stabbing attack in the Old City last week that the BBC ignored at the time.

Bateman later claimed that things have been “relatively stable” in Jerusalem in recent months.

Bateman: “It’s only six months since the all-out conflict, the war between Hamas in Gaza and Israel which had occurred after weeks of violence and tensions on the streets of Jerusalem, really spilling out. So I think there’ll be some concern at this because things have been relatively stable since that time…”

In the five months between June and October inclusive, the Israel Security Agency recorded 183 terror incidents in Jerusalem and inside the ‘green line’ [June, July, August, September, October]. Two of those five months saw no BBC coverage of Palestinian terrorism whatsoever while the remaining three months saw minimal reporting.

BBC amplification of Hamas’ narrative concerning this terror attack was not however limited to Tom Bateman’s reports, as we shall see in an upcoming post.