This award-winning Guardian advert aired in 1986.

It’s of course true that only when news reports provide the full picture can you really know what happened.  However, as we’ve demonstrated continually, when it comes to Israel, Guardian news consumers are consistently only given half the picture – a pattern evident in a recent article they published about West Bank violence.

The three thousand plus word Guardian article by Donald Macintyre (“How settler violence is fueling West Bank tension”, Nov. 28) focuses entirely on Israeli attacks against Palestinians, yet fails to devote even a word to Palestinian violence against Israelis.

To get a sense of how misleading the omission is, an Aug. 2020 report by Israel’s Justice Ministry, based on data compiled by Israel’s Security Agency, concluded that most acts of violence in the West Bank are committed by Palestinians against Israeli settlers – not, as the Guardian would have you believe, the other way around.

However, as illustrated in our monthly reports on BBC coverage of Palestinian terror incidents, the overwhelming majority of Palestinian attacks against Israelis in Judea and Samaria go unreported by most media outlets.

The following graph was published by Israel’s Security Agency.  Note the number of monthly Palestinian attacks in the West Bank / Judea and Samaria (in green) over a four month period in 2021. 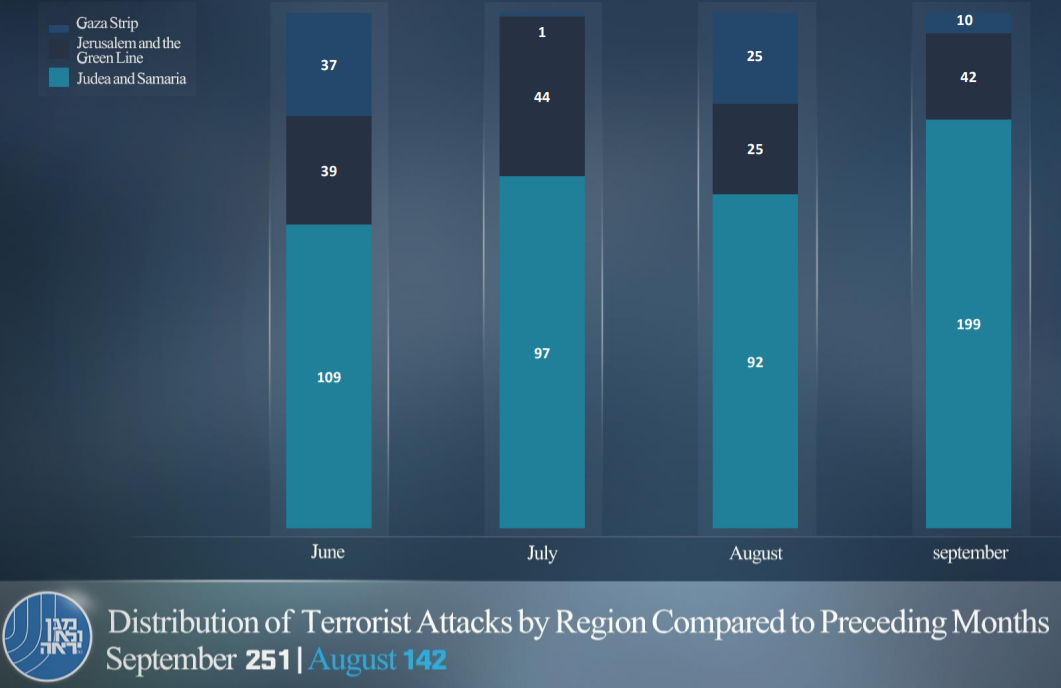 Though, due to security measures taken by the IDF, most Palestinian attacks don’t result in serious injuries or deaths, that’s certainly not for lack of trying.  In fact, just last week, the IDF arrested over fifty Hamas members in the the West Bank who were in the advanced stages of plans to a launch a series of suicide bombing attacks against Israeli civilians.

Not one of the British media outlets we monitor covered this story.

There isn’t one Palestinian in the Guardian article by Macintyre who doesn’t evoke sympathy.  They’re all either alleged victims of Israeli violence, family members of the victims or ‘human rights activists’.  Much like the Guardian’s broader coverage of the region, there isn’t even the subtlest indication of Palestinian extremism and antisemitism – of which there is ample evidence for any journalist who wishes to cover it.

To cite just one example: Recently, Palestinian rioters in the town of Beita burned a swastika inside a Star of David, an incident which drew the attention of the Israeli and Jewish press, but, as our colleague Tamar Sternthal noted, was ignored by the international mainstream media.

Even more disturbing was a report that organisers of the protest responded to criticism of the swastika with ugly vitriol, stating:

“You [Israelis] are worse than Hitler and the Nazis … Yes, we want to burn you alive.”

Omitting context that undermines the narrative

The Guardian contributor is so intent on advancing the narrative that Israeli settlers enjoy impunity over attacks on Palestinians, that he omits crucial information that runs counter to that story.

For instance, the first six paragraphs are devoted to describing a horrible episode of Israeli settler violence that occurred in September in the village of Al Mufakara, located in the South Hebron Hills in which six Palestinians, including a three year-old girl, were injured – an incident denounced as an “act of terror” by Israel’s foreign minister.  The article then pivots to other incidents of violence, and, throughout the piece, readers are told that settlers are rarely if ever charged or indicted for such violence.

Yet, Mcintyre fails to reveal that two teenage settlers were in fact indicted for their role in the attack at Al Mufakara that was so thoroughly described in the piece.

Why would Macintyre – if he was committed to telling the whole story – omit this information?

There is, without doubt, a small number of extremist Jews in the territories who engage in violence, and there has been, within Israel, a debate over whether the government and security personnel have been doing enough to protect Palestinians from such attacks.  However, reporters almost never hold Palestinian leaders accountable to policies they enact – such as pay for slay – that actually incentives terror.  And, given that the Palestinian Authority is an autocratic regime, there’s almost no internal discussion within their society over such decisions.

As the Guardian’s old advert said: “An event seen from one point of view gives one impression. Seen from another point of view, it gives quite a different impression”.

Telling the whole story of what’s fueling “West Bank tension” requires a journalist committed to engaging in a rigorous fact-based analysis – one imbued with balance, nuance, and complexity, rather than simple, ideologically-driven narratives leading readers to the desired conclusion.

If we’ve learned anything over the years it’s that the Guardian is institutionally incapable of adhering to such basic journalistic principles.