As reported by the Jerusalem Post and others, an international sporting event was cancelled on November 29th:

“The Men’s World Team Squash Championship was cancelled on Monday, after the host country Malaysia would not permit the Israeli team to play.

“The WSF [World Squash Federation] believes in an open and inclusive Men’s World Team Squash Championships and the possibility that some nations would be unable to compete due to the lack of confirmation over the issuing of visas and travel authorizations by the National Authorities has led SRAM [Squash Racquets Associaton of Malaysia] to inform the WSF of the decision to cancel,” the WSF said in a statement. […]

The championship’s cancelation came several days after the ISA [ Israel Squash Association] sued the World Squash Federation and the Squash Racquets Association of Malaysia at the Court of Arbitration for Sport after Israelis were banned from competing in next week’s world championship in Kuala Lumpur.”

An earlier JP report noted that:

“Malaysia and Israel do not have diplomatic relations. Malaysia’s squash association said in September that it “would not be able to guarantee [Israeli players’] safety and well-being” due to long-standing sensitivities surrounding the Israel-Palestine conflict. […]

The head of the International Olympic Committee’s Institutional Relations and Governance Department Jérôme Poivey called the situation “extremely regrettable” and said that he urged the government of Malaysia to provide assurances that the Israeli team would be allowed to participate in the championship without any discrimination.

Italian Squash Federation delegate David Babini also lent his support to the Israeli team, stating: “Italy believes that the Championship should be removed, with immediate effect, from Malaysia. This is an unacceptable discrimination against Israel, which has serious consequences on the reputation within the IOC of the WSF, with negative repercussions on our Olympic aspirations.””

A regular BBC interviewee apparently had a different opinion:

“Prominent Palestinians, however, came out in support of Malaysia, including lawmaker Mustafa Barghouti, who tweeted in favor of banning the Israeli squash delegation, and Hamas spokesman Abdel Latif al-Qanun, who praised “Malaysia’s permanent and original position in opposing normalization with the occupation, supporting the Palestinian people and strengthening their steadfastness,” Indian news site The Siasat Daily reported.”

Readers may recall that this is not the first time that Malaysia has refused to allow Israeli athletes to compete in international sporting events that it was set to host:

The BBC covered this latest story in a report titled “World Team Squash Championships: Event cancelled over visa and Omicron concerns” which appeared the day after the cancellation. 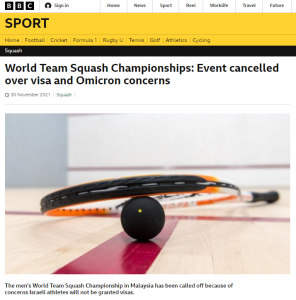 One would of course expect that a repeat incident of blatant discrimination and bigotry in sport would be made available to BBC audiences beyond visitors to a rather obscure webpage dedicated to a specific sporting branch.