A Guardian report by their new Jerusalem correspondent Bethan McKernan revives a discredited claim that, during the May war, the IDF ‘targeted’ a Gaza bookshop.  The article (“Bookseller Samir Mansour: ‘It was shocking to realise I was a target’”, Dec. 4), tagged under their “The Observer’s faces of 2021” page, focused on Gaza bookseller Samir Mansour, and the fact that, because of a crowdfunding campaign after the war, his shop is being rebuilt to be three times its original size.

The piece repeats the claim twice that, during the war against Hamas, the Israeli military ‘targeted’ the bookshop.

First, in the headline: 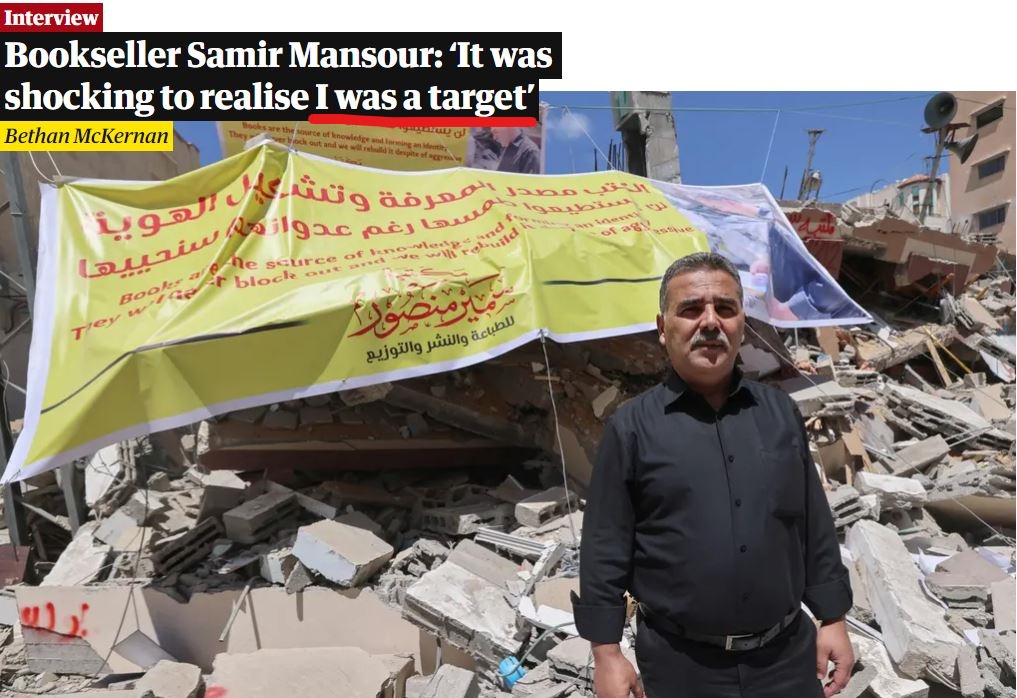 And then, unchallenged, in this passage:

“It was very shocking to realise I was a target,” he says. “I’ve worked with books my whole life, starting with my father when I was 12. I don’t have any political affiliations. In Gaza we have grown up under war, but I still never expected this.”

However, the fact that Mansour doesn’t “have any political affiliations” is irrelevant, as the purported reason why the IDF attacked the area had nothing to do with him, or the fact that there was a bookshop in the building.  As multiple media outlets (including the The Times and NBC News and the LA Times) reported at the time, the multi-storey building in which his shop was located was also used by Hamas to produce weapons and gather intelligence.  Additionally, the IDF phoned him – and others in the area – in advance of the strike to give him time to evacuate.

In addition to the absurdity of suggesting that Israel would have any interest in attacking a bookshop, McKernan, by omitting the IDF explanation for the strike, obfuscates the real story: Hamas’s consistent use of human shields – their placing of military assets within civilian areas.  As we’ve noted previously, this omission represents a pattern within Guardian (and BBC) coverage of wars between Israel and the antisemitic extremist group that controls Gaza.

McKernan’s inaugural article as the outlet’s regional correspondent demonstrates what those who read our post last week, noting the intellectual baggage McKernan brings with her to Jerusalem, already know: the institutional anti-Israel bias the Guardian brand is known for will certainly continue.

Our take on the Guardian’s new Jerusalem correspondent