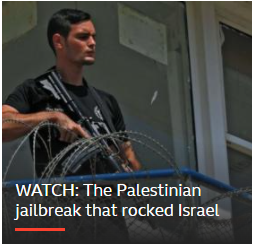 Subsequent promotion of that report, as well as its synopsis, framed it as “a story of dispossession, violence and bitter division in a fractured region”. Significantly, that claim of “dispossession”- i.e. the action of depriving someone of land, property, or other possessions – was not clarified throughout the film. 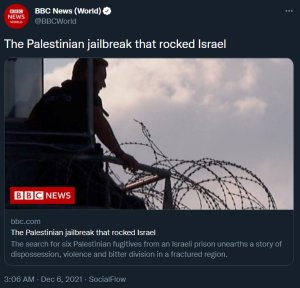 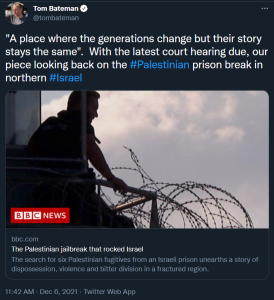 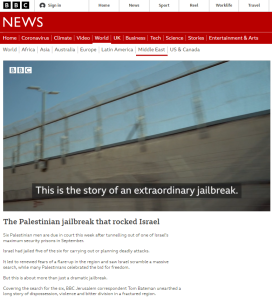 Titled ‘Escape from Gilboa’, the film relates to the escape of six security prisoners from Gilboa prison that was already covered in four BBC News website reports in September of this year.

Bateman: “This is the story of an extraordinary jailbreak. […] How did six men dig their way out of maximum security in a region that can quickly ignite? […] And as the prisoners resurfaced, so did a powerful story of dispossession, violence and bitter division.”

The film begins with Bateman’s portrayal of the escape itself, after which viewers are told that:

Bateman: “Israel had jailed five of the six for carrying out or planning deadly attacks. Among them was Zakaria Zubeidi, for years one of Israel’s most wanted. But this is a story about more than a dramatic jailbreak. As I covered the search for the six, I heard how it unravelled layers of the past. And showed you more about a fractured region.”

Bateman then visits Jenin refugee camp which is described onscreen as being in the “occupied West Bank” despite having been under complete Palestinian Authority rule since 1996. Bateman’s messaging is that “everyone supports and stands with them [the escapees]” and he goes on to make the unevidenced claim that:

Bateman: “In fact, most Palestinian families have had a member detained by Israel at some time. It’s why sympathy for prisoners is such a powerful issue to Palestinians. I mean for people here like these kids, the six are heroes, they were rooting for them ever since their escape. And the point is this is a rare case of Palestinians on their own managing to overcome the might of Israel’s security.”

The relevant issue of Palestinian Authority payments to terrorists and their families is not mentioned by Bateman at this point or any other in the film.

Bateman brings up the topic of Administrative Detention without actually uttering those words and while citing unidentified “rights groups”.

Bateman: “Some prisoners are held without trial and rights groups condemn the military courts system for Palestinians under occupation. Israel rejects this saying it meets all standards and prevents attacks.”

He goes on to give an account of the search for the prisoners which fails to clarify that the mosque he mentions is in the Israeli town of Na’ura, to the north of the prison.

Bateman: “Then the first clues. The six are spotted leaving a mosque a few miles from Gilboa. In the heat and the rugged terrain, can they survive? Will anyone take them in?”

He interviews an army tracker who is described as follows:

Bateman: “Officer “K” is an Arab Israeli, in fact by heritage a Palestinian Bedouin, hired for his skills on the land. And he won’t show his face.” [emphasis added]

He goes on, failing to mention the connection between Fatah and al Aqsa Martyrs brigades:

Bateman: “So why are the stakes so high? Five of the six belong to Islamic Jihad and Zubeidi is a former leader of al Aqsa Martyrs Brigades. His story is notorious to Israelis, hailed by Palestinians.”

Viewers then see an interview with Ahmed Tobasi who has previously appeared in BBC content in relation to the ‘Jenin Freedom Theatre’. Tobasi’s unquestioned portrayal of growing up in the Jenin refugee camp includes “army invading each night, each day, destroying your houses, killing your neighbours, taking your family and you’re not controlling anything in your life”.

Bateman makes no effort to verify those claims or put them  into context and fails to clarify to viewers that Jenin was one of the main centres of terrorism during the second Intifada. In light of previous BBC portrayals of the ‘Jenin Freedom Theatre’, Tobasi’s portrayal is of interest:

Bateman: “He [Tobasi] grew up with Zubeidi. The boys were in a drama group in Jenin camp, later known as the Freedom Theatre.”

Tobasi: “…you start to see this drama group is becoming an armed resistance, leaders in the camp.”

Bateman: “As a teen Tobasi was in Islamic Jihad, and jailed, but later turned his back on militants. Israel later wanted Zubeidi for attacks including one which killed six Israelis. By 2002 suicide bombings had been devastating Israel and its army invaded Jenin camp. An Israeli sniper shot dead Zubeidi’s mother Samira as she stood next to a window.”

Viewers then see an interview with Zubeidi’s brother Yahya who states that “our mum’s martyrdom left a strong impact on us” but without Bateman bothering to point out that Zakaria Zubeidi’s involvement in terrorism began before his mother’s death.

Referring to the 2002 IDF operation in Jenin that the BBC has misrepresented over the years, Bateman fails to clarify that the majority of the Palestinians killed were terrorists:

Bateman: “More than fifty Palestinians and twenty-three Israeli soldiers were killed in the fighting in Jenin, events that shape the collective memory here.”

Bateman goes on to interview the brother of Eliyahu Asheri who was murdered in a terror attack in 2006, telling viewers that:

Bateman: “Israel jailed Iham Kamamji for his part in the murder. He’s one of the six who escaped from Gilboa.”

Following that, viewers hear a subjective and unquestioned account from a woman describing the search for two of the escaped prisoners in Arraba with Bateman going on to state:

Bateman: “After a week on the run, Zubeidi and three others are caught. They’re exhausted, reportedly having to find food digging through trash. After ten more days the Israelis find the last two, including Iham Kamamji, hiding in a house, tracked down via phones after they tried to call relatives.”

Interestingly, Bateman’s account refrains from informing BBC audiences of the failure of the escaped terrorists to get any assistance from Israeli Arabs (who, as regular readers will be aware, the BBC likes to portray as Palestinians), despite that aspect of the story having been reported in the local media.

“In Na’ura, the six prisoners entered a local mosque at around 5 a.m, changed clothes, prayed, and left. “We asked people on the street for help to take us to Umm al-Fahm, we told them we worked there,” al-Arida said, but nobody would give them a ride. […]

“At night we slept in an industrial area near Afula. We continued walking toward Nazareth and asked for food and water from people. We searched the garbage cans for food, what we found we ate,” al-Arida said.

“Five days into a national manhunt for six Palestinian security prisoners who escaped from a high-security jail in northern Israel, police captured two of the fugitives in Nazareth Friday night. Hours later, two others — including notorious terror commander Zakaria Zubeidi — were apprehended in the nearby town of Shibli–Umm al-Ghanam.

In both cases, Arab Israelis who encountered the fugitives reported them to authorities, aiding in their capture. Police sources told Walla news that dozens of Arabs phoned in reports in recent days. […]

Public Security Minister Omer Barlev vowed the remaining two fugitives would be caught and also thanked Arab Israelis “who assisted in the capture of the terrorists.”

“For four days the escapees wandered around believing they would find shelter and help among Arab Israelis, but they were mistaken,” Barlev tweeted. “Everywhere they turned, Arab citizens refused them and called police. Much respect to all the responsible citizens!””

Bateman again brings in Ahmed Tobasi in order to promote version of the ‘open air prison’ trope usually used by the BBC in relation to the Gaza Strip:

Tobasi: “All Palestinians are in prison. The difference is it’s just a space that you move in. When is this gonna change?”

Bateman could of course have pointed out at that point that “change” will only come when Palestinians accept Israel’s existence, cease glorifying and rewarding acts of terror and put an end to the use of politically and religiously motivated violence. Instead, he chose to end his long report with a denial of Palestinian agency and ‘contextualisation’ of terrorism.

Bateman: “Zubeidi and the others are back in prison. It lifts the pressure for Israel’s security forces. Hearing of the recapture, Palestinians sense a kind of return to the norm. A place where the generations change but their story stays the same.”

Clearly Tom Bateman’s revisiting of this three-month-old story does not provide audiences with any information not already available. Rather, Bateman’s project was primarily aimed at advancing narratives and omissions that have dominated but compromised BBC coverage for years, while attempting to ‘contextualise’ Palestinian terrorism. 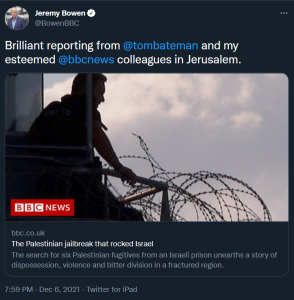 In addition to his widely promoted film, Bateman also produced an audio version of the report which was aired on the same day on BBC World Service radio (‘Newshour’ – from 14:06 here) and on BBC Radio 4 (‘The World Tonight’ – from 27:17 here).