On December 4th the BBC News website published a video titled “Anti-Semitism: 2021 likely to be ‘the worst year on record‘” on its ‘stories’ page. 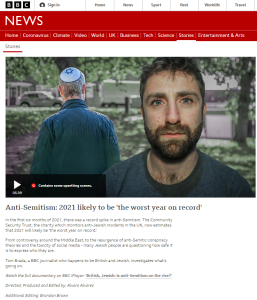 “In the first six months of 2021, there was a record spike in anti-Semitism. The Community Security Trust, the charity which monitors anti-Jewish incidents in the UK, now estimates that 2021 will likely be ‘the worst year on record.’

From controversy around the Middle East, to the resurgence of anti-Semitic conspiracy theories and the toxicity of social media – many Jewish people are questioning how safe it is to express who they are.

Tom Brada, a BBC journalist who happens to be British and Jewish, investigates what’s going on.”

That 5:39 minute video is composed of clips from a documentary titled “British, Jewish: Is Anti-semitism on the Rise?” presented by Tom Brada which was aired on the BBC News channel on December 3rd and will be available to viewers in the UK on BBC iPlayer for the next 11 months.

As we see, the BBC has still not got round to spelling antisemitism properly.

The half-hour film begins logically enough, with Brada interviewing a man from Burnley in northern England who was the victim of an antisemitic attack in March 2020. Brada goes on to get statistics on antisemitic incidents from Dr Dave Rich of the Community Security Trust who notes an exceptional spike in May 2021, during ‘Operation Guardian of the Walls’.

The obviously relevant issue of why British Jews (like other Jewish communities in Europe) experience a rise in antisemitic incidents every time conflict between Israel and Hamas terrorists flares up thousands of miles away is not seriously examined at that point – or any other – in Brada’s documentary. Neither does Brada address the question of why other minority groups in the UK do not experience similar abuse in relation to other conflicts elsewhere in the world. 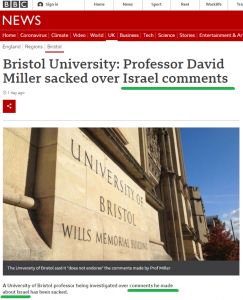 The film continues with Brada speaking to one of the students who flagged up the antisemitism of lecturer David Miller at Bristol University. Despite the story of Miller’s dismissal having been covered badly by the BBC at the time, viewers see a screenshot of the inaccurate headline – “Professor David Miller sacked over Israel comments” – which the BBC has still not corrected over two months on.

Brada continues with interviews with his own parents and Nadine Batchelor-Hunt who “called out antisemitism on Twitter” in relation to another story covered badly by the BBC at the time. Viewers then see Brada speak with a Jewish nurse at a London hospital who was verbally abused in May 2021, with him describing her experience as “a good demonstration of how complicated things can be when Israel is in the news and how that affects Jewish people living even in the UK”.

Once again Brada avoids any serious exploration of why that should be the case and what fuels that phenomenon. He does however promote the Livingstone Formulation, as the BBC has so often done in the past.

Brada: “…there are people who are really supportive of the Free Palestine movement who would say by entangling us even with the word antisemitism, it’s a way – well it’s not a way – it just does make it harder to express support for Palestine without being accused of being anti-Jewish.”

Brada goes on to say that “…the familiar pattern that Jewish people around the world are made to feel unsafe when Israel is in the news is disturbing” but again fails to make any serious effort to examine that phenomenon, including the part played by the BBC in whitewashing antisemitism at ‘pro-Palestinian’ rallies and amplifying denials from anti-Israel campaigners.

In the last eight and a half minutes of his film, Brada chooses to feature two additional interviewees whose contribution to helping BBC audiences understand the stated topic of his film is highly debatable.

The first is Francesca Kurlansky of ‘Na’amod’. Brada fails to inform audiences that that group – aka ‘British Jews Against Occupation’ – has a grand total of about 250 members and hence is in no way representative of mainstream opinions among the British Jewish community of around 292,000.

Kurlansky – who opposes the IHRA working definition of antisemitism – is introduced as “part of a group of British Jewish activists who campaign against the actions of the Israeli government” and she is allowed to repeatedly promote her own views as “moral” (and by implication, the views of those who support Israel as ‘immoral’) without any challenge from Brada.

Brada’s choice of final interviewee is even more unhelpful to BBC audiences trying to understand antisemitism in the UK.

Brada: “…I want to speak directly to someone whose activism leads to accusations of antisemitism so I am meeting up with two YouTubers. Back in May, they drove to a Jewish community in London and filmed themselves challenging Jewish people on the street.”

The incident in Golders Green (on Shabbat) to which Brada refers was reported by the Jewish News and the Jewish Chronicle at the time.

“Three Muslim YouTubers have filmed themselves standing in front of a billboard bearing the words “Did we not learn from the Holocaust?” while pushing Jews for their views on Israel. […]

Ali Dawah, Mohammed Hijab and a self-described comedian who goes by the name of Smile2Jannah, targeted identifiable Jewish passers-by, asking them for their views on Israel and delivering speeches about “the killing of children” to their camera in the interim.

When Jewish members of the public refused to engage with the men, one of them said: “When people are being butchered in this way the least you should be able to do is have a conversation and provide your view. Why would you cross the road and not be willing to engage?” […]

Mr Hijab has previously been filmed at a pro-Palestinian rally yelling: “The difference between us and them is that for them they think life begins, for us we think believe that death begins. We believe that life begins at death, we don’t care about death, we love death.””

Hijab also made an appearance when British Jews organised a pro-Israel rally in London in May.

Nevertheless, Tom Brada apparently thought it appropriate to give Mohammed Hijab  four minutes of BBC airtime in which to whitewash his anti-Israel activism – and antisemitism – with what can at best be described as weak and ineffective challenge from Brada.

Apparently Mohammed Hijab was so pleased with that interview that he uploaded it in its 44-minute entirety to YouTube and promoted it on Twitter. There, readers can see for themselves which parts the BBC chose to edit out, including the apartheid tropes, the admission of cooperation with the fringe anti-Zionist group Neturei Karta, Hijab’s claim to be “a Semite” and his assertion that it is “impossible for a Muslim to be antisemitic”.

Any serious journalist (regardless of whether or not he or she is “British and Jewish” as the BBC took pain to repeatedly point out in Brada’s reports) aspiring to tackle the issue of rising antisemitism in the UK obviously has a great deal to investigate and present comprehensibly to the audience. This film, however, does very little to help audiences unfamiliar with that topic to understand its roots, its manifestations and its effects on the British Jewish community. 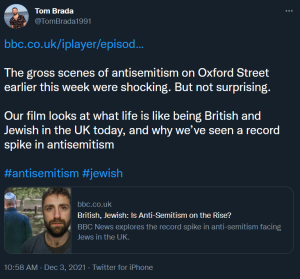 Especially – but not only – given the BBC’s abysmal performance on that story, the failure of Brada and his colleagues to explain in this film that anti-Israel activists exploit the fact that “Israel is in the news” in order to promote their already existing agendas is particularly notable.

If Brada really wanted to investigate the spikes in antisemitism in the UK whenever conflict erupts thousands of miles away, a very good place to start would be some serious examination of the influence of media coverage of both that foreign conflict and antisemitism in the UK over the years, and in particular the record of his own outfit, Britain’s national broadcaster.

BBC CONTINUES TO PROMOTE WHAT THE EHRC RULED ‘UNLAWFUL HARASSMENT’

IN WHICH THE BBC ASKS ‘IS ZIONISM WRONG?’

BBC NEWS TRIES – AND FAILS – TO EXPLAIN ANTISEMITISM AND ANTI-ZIONISM