On December 13th both BBC Radio 4 and BBC World Service radio covered the first official visit by an Israeli prime minister to the United Arab Emirates.

The aim of that visit was described as follows:

‘“The visit is meant to deepen cooperation between the countries in all fields. The ties are excellent and diverse and we must continue to nurture and strengthen them, and build a warm peace between the two nations,” Bennett said in a video statement from the tarmac before departing. […]

“The leaders will discuss deepening ties between Israel and the United Arab Emirates, with an emphasis on economic and regional issues that will contribute to prosperity, welfare and strengthening stability between the countries,” the Prime Minister’s Office said in a statement.’

BBC Jerusalem bureau correspondent Tom Bateman took the opportunity to promote a specific talking point not directly connected to that visit at the end of all his audio reports on the story. [emphasis in italics in the original]

Bateman: “And of course the big losers in all of this are the Palestinians who have seen all of it – seen the embrace by the Gulf Arab states of the Israelis – as effectively a betrayal of the Arab agreement since 2002 that there would be no normalisation, no recognition of Israel until there was an end to occupation and they’d negotiated a two-state solution.”

Bateman: “And the main losers have been the Palestinians who see the new ties with Israel as a betrayal of Arab solidarity over their ambitions for statehood. One official said the Gulf welcome laid on for Israel’s leader violated support for the Palestinian cause.”

Bateman did not clarify to listeners that the “official” concerned is Wasel Abu Youssef of the PLO – the organisation that has turned down repeated opportunities to come to an agreement with Israel over the past three decades.

Bateman: “The big losers over the past year, I think, have been the Palestinians. They opposed all of this from the start. They see the embrace by the Gulf Arab states of the Israelis effectively as a betrayal of Arab solidarity historically over their ambitions for statehood.” 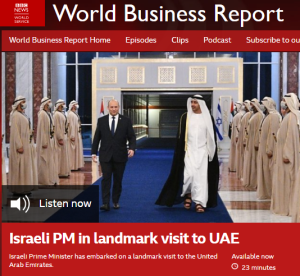 The topic of Palestinian opposition to the Abraham Accords was also brought up by ‘World Business Report’ presenter Vivienne Nunis in her second question in a report supposedly about “the potential for economic cooperation between the two states [UAE and Israel]”.

Nunis: “Now this visit comes a year after the UAE moved to normalise relations with Israel but that rapprochement has been criticised by the Palestinians.”

Back in August and September 2020, BBC framing of the Abraham Accords included plenty of references to the 2002 Saudi peace initiative and promotion of the notion of ‘betrayed’ Palestinians.

Fifteen months on, Tom Bateman is still clinging to that framing and promoting PLO talking points to BBC audiences in both the UK and around the world.

REVIEWING BBC AMPLIFICATION OF THE NOTION OF ‘BETRAYED’ PALESTINIANS