Listeners to the December 21st edition of BBC Radio 4’s ‘Today’ programme heard an item (from 33:50 here) that was introduced by presenter Nick Robinson with the assertion that Israel’s government had “hit back” at the Archbishop of Canterbury.

Robinson: “The Israeli government have hit back at Christian leaders, including the Archbishop of Canterbury, who issued an urgent call at the weekend about the plight of Christians living in the Holy Land. Tom Bateman is our Middle East correspondent. […] What have the Israeli government been saying?”

Tom Bateman began by giving his account of the Sunday Times article penned by Justin Welby and Hosam Naoum who, contrary to Bateman’s claim is not the “counterpart” of the symbolic head of the worldwide Anglican Communion. Interestingly, Bateman refrained from informing listeners that 23.3% of the 182,000 Christians in Israel are not Arabs and did not seriously challenge the claim of an ‘attempt to drive Christians out’ despite the fact that Israel’s Christian population grew by 1.4% in 2020 and 84% are satisfied with life in the country.

Bateman: “Well the article over the weekend was written by the Archbishop of Canterbury as well as his Anglian counterpart here in Jerusalem. And I think the theme generally was that they wanted people to remember that it wasn’t going to be a particularly merry Christmas for Palestinian Christians in the Holy Land. It talked about what they describe as a concerted attempt to drive Christians from parts of the Holy Land and in particular from Jerusalem. Now they pay tribute to Israel, what they called a beacon for religious freedoms, but blamed this on what they call radical fringe groups. They also spoke about Israeli settler communities in the occupied West Bank and restrictions on freedom of movement for Palestinians in the West Bank which they said isolated Christians in the region.”

No effort was made by Bateman to remind listeners that those “restrictions on freedom of movement” came about because of Palestinian terrorism. Sharp-eared listeners then learned that Robinson’s opening claim was inaccurate as Bateman clarified that the Israeli statement did not relate to Justin Welby. The earlier statement from “Christian leaders” to which Bateman referred can be found here.

Bateman: “Now they…last night we had this very forceful statement from the Israeli government. They didn’t reference the Archbishop of Canterbury or his article but referred instead to a joint statement by Christian leaders in Jerusalem that was put out the week before, which the archbishop drew heavily from and had backed. And the Israeli government said that this was baseless, that it was full of distortions in terms of the earlier statement by Christian leaders and accused them of what they described as a lack of portraying the plight of Christians elsewhere in the Middle East, and called that, in their words, infuriating.”

Notably, listeners were not told anything at all about “the plight of Christians elsewhere in the Middle East” – not least those in Palestinian Authority and Hamas-ruled territories.

Robinson: “Underlying this row, Tom, is attacks carried out on Palestinian Arab Christians and a question of who’s…ehm…held to be…to blame for those attacks.”

Bateman: “Yeah, there’s been a series of incidents of vandalism, of cases of intimidation against Christians, particularly in Jerusalem, over the years. I mean for example last year there was an arson attack on the church in the Garden of Gethsemane. Ah…and also attempts in the Old City…ahm…in particular to – by Jewish settler groups – to purchase, in one case, two very old and renowned hotels that were owned by the Greek Orthodox Church. They had sold those effectively after a lengthy court case but have blamed what they have called bribery and intimidation of officials in the past…ahm…for the sale.”

The December 2020 incident at the Church of All Nations in the Garden of Gethsemane was described as follows by the police after the arrest of a suspect:

“…police said that they did not believe the apparent arson was motivated by ideological or nationalist beliefs.

Asked by The Times of Israel to elaborate, a spokesperson for Jerusalem Police said the suspect had been arrested for his role in criminal arson attempts before.

“This suspect has been involved in arson in all sorts of places, without any connection to Christians, religion and so on,” the spokesperson said.”

Bateman’s mention of “two very old and renowned hotels” relates to subject matter that has been covered badly by the BBC – including the ‘Today’ programme – in the past:

BBC COMPLAINTS MAKES IT UP AS IT GOES ALONG

Bateman closed his report with yet more uncritical amplification of claims from “church leaders”, failing to tell listeners exactly how many Christians are alleged to have left Israel or that the proportion of Christians in Israel’s population is dependent upon a variety of factors, including birth rates in other sectors.

Bateman: “Now…ahm…this has been going on for many years and it’s essentially what underlines what the church leaders say is the decision by Christians to leave and for their numbers as a proportion of the population to dwindle. As far as the Israeli government is concerned, they believe that the country is a beacon for freedom of association, for freedom of religion and that’s why they say the total numbers of Christians – Arab Christians – inside Israel has been growing and I think why they’ve been angered by this statement.”

Later in the same programme (from 2:08:07) listeners heard from Bateman again in a news bulletin.

Newsreader: “The Israeli government has accused Christian leaders in Jerusalem of baseless distortions after heads of churches said radical groups were trying to drive their community out of the Holy Land. The leaders’ statement was supported by the Archbishop of Canterbury, as our Middle East correspondent Tom Bateman reports from Jerusalem.”

Bateman: “At the weekend the Archbishop of Canterbury drew attention to what he called a concerted attempt to drive Christians out of the Holy Land. Writing in the Sunday Times along with the Anglican archbishop in Jerusalem, Justin Welby praised Israel as a beacon for religious freedoms but said vandalism of holy sites by fringe radical groups was an attempt to force Palestinian Christians away. The pair backed a recent call to reverse the trend made by local church leaders who had highlighted a string of assaults and cases of intimidation over the last decade, believed to have been carried out by Jewish ultra-nationalists. In a statement released last night, the Israeli government made no reference to the Archbishop of Canterbury’s article but said the earlier Jerusalem church leaders’ comments were baseless and distorted, claiming they could lead to violence against innocent people.”

Visitors to the BBC News website’s ‘Middle East’ page on the afternoon of December 21st found a written report on the same topic titled ‘Israel rejects ‘alarm call’ by Christian leaders in Jerusalem’. The opening sentence of that report contradicts Bateman’s implication that the “local church leaders” had mentioned “Jewish ultra-nationalists” in their statement: 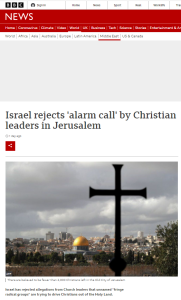 “Israel has rejected allegations from Church leaders that unnamed “fringe radical groups” are trying to drive Christians out of the Holy Land.”

Once again ignoring relevant factors influencing the proportion of Christians in Israel’s population as well as the issues faced by Christians in the Gaza Strip and Palestinian Authority controlled areas, that report states:

“While the overall number of Palestinian Arab Christians in Israel, the occupied West Bank and the Gaza Strip is growing, the community has been in decline for years as a proportion of the population.

Christians now make up less than 2% of the population and fewer than 2,000 are believed to be left in the Old City of Jerusalem.”

Readers are not informed that the Christian population of Jerusalem (rather than just the 0.9 km2 Old City, as selectively cited by the BBC) is 12,900.

As we see, all three of these reports uncritically promote claims made in the statement put out by the heads of churches in Jerusalem and the much criticised article by Justin Welby and Hosam Naoum. While amplifying a narrative that the BBC has been promoting for years (see ‘related articles’ below), especially around this time of year, none of these reports made any serious journalistic effort to provide BBC audiences with the factual information needed to comprehend their subject matter properly and comprehensively – including on the topic of the Israeli authorities’ action against perpetrators of anti-Christian incidents.

TOUGH LUCK SYRIAN AND IRAQI CHRISTIANS: THE BBC’S YOLANDE KNELL HAS OTHER PRIORITIES

BBC ME EDITOR’S ANALYSIS OF THREAT TO CHRISTIANS: IS, EXTREME ISLAM – AND ISRAEL