An edition of the BBC World Service radio programme ‘Newsday’ which aired on December 22nd included an item (from 27:13 here) introduced as follows:

“We start though with Israel. […] the country has announced a fourth Covid jab for over-60s and medical teams to tackle the spread of Omicron. The decision follows the first known death in Israel of a patient with the Omicron variant.”

In fact – as was already known at the time of broadcast – it was not certain that the patient, who had underlying medical conditions, had actually died of Covid and later in the day the hospital reported that he had been infected with the Delta variant rather than the Omicron variant.

A report published on the BBC News website’s ‘Middle East’ page also on December 22nd indicates that the BBC is aware of that: 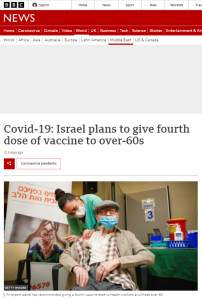 “Four deaths have also been reported in the past seven days, including that of a 68-year-old man who doctors suspected was infected with Omicron. The health ministry said on Wednesday that he actually had the Delta variant.”

Nevertheless, that inaccurate information concerning “the first known death in Israel of a patient with the Omicron variant” has to date not been corrected and will remain online “for over a year” according to the programme’s webpage.

In the same ‘Newsday’ item the presenter asked his Israeli interviewee a question obviously intended to raise the topic of ‘vaccine nationalism’.

“Is there a public debate in Israel about doing something like this – giving a fourth dose to citizens – where elsewhere in the world there are countries where people are struggling to get a first dose?”

Listeners were not told that days earlier Israel had pledged to donate a million doses of vaccine to countries in Africa via the COVAX programme.

The BBC reported that pledge on its website’s ‘live’ page on December 16th. 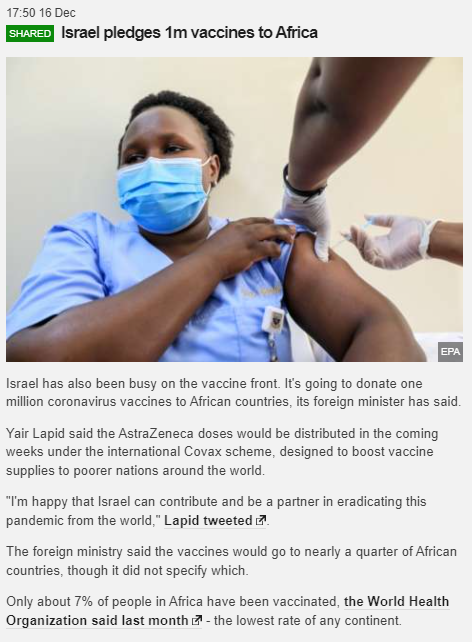 However that report did not appear as a stand-alone item and was only presented to visitors to the BBC News website’s ‘Middle East’ page as ‘related reading’ for a limited period of time on December 17th.

“On Tuesday night, Israel’s Pandemic Expert Committee recommended a fourth dose of the Pfizer-BioNTech vaccine for over-60s, medics, and those with compromised immunity, at least four months after their third jab.

The move is set to receive final approval by the health ministry in the coming days.”

The article has not been updated to inform readers that the Pandemic Expert Committee’s recommendation has yet to be approved by the Ministry of Health and is hence currently on hold.