Earlier this month we published a summary of CAMERA Arabic in the British media in which we noted that corrections to an article written by BBC Arabic correspondent Feras Kilani would appear in a future post. Two of those corrections were reported by the Jewish Chronicle.

Titled “Hamas: the movement is under increasing isolation after the British decision to ban it”, Kilani’s analysis purports to provide BBC Arabic readers with the background necessary for understanding Hamas’ relationship with the United Kingdom. However it is marred by omissions and inaccuracies. (All translations, emphases and in-bracket remarks are by CAMERA Arabic unless otherwise specified) 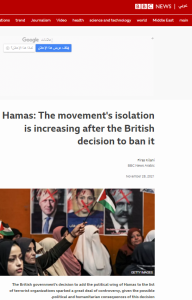 “The decision [to classify Hamas as a terrorist organisation] may put restrictions on the Palestinian diaspora in the UK, especially since the movement enjoys vast support in the Gaza Strip whence a large portion of the Palestinian British community is descended.
London is considered one of the most prominent Western cities in terms of activity and movement in support of the Palestinian cause […]. The reasons for this largely go back to what the Palestinians describe as moral responsibility which the UK bears for their tragedy.”

Omission – A major contributing factor to the British Palestinian community’s high ratio of Hamas members and supporters is decisions made by past UK governments. For several decades they allowed members of the Muslim Brotherhood to immigrate under the premise that if the UK were to accommodate them, the Muslim Brotherhood would not attack it. The same applied to MB members from elsewhere in the Arab world, such as Tunisia’s Rached Ghannouchi and Egypt’s Ibrahim Munir.

“Since its birth in late 1986 from the womb of Palestinian chapter of the Muslim Brotherhood organisation, the ‘Islamic resistance’ movement sought to redefine the conflict with Israel and bring it back to square one – but by the Islamic, rather than national, dimension. Thus, its charter stipulated that ‘historic Palestine, including present-day Israel, is a land for Muslims’, and called for the destruction of the State of Israel, which prompted its accusation of antisemitism early on.”

Omission – The 1988 Hamas Charter’s antisemitism does not derive solely from its call to destroy Israel and the claim in Article 11 that the land is designated for Muslims. The Charter’s antisemitism is also clearly and consistently apparent from a series of other stipulations (translations in this part are by Yale University’s Avalon Project with minor alterations by CAMERA Arabic):

Article 7 asserts that Hamas “aspires to the realization of Allah’s promise, no matter how long that should take. The Prophet […] has said: ‘The Day of Judgement will not come about until Muslims fight the Jews, and the Muslims kill them to a point when the Jew[s] will hide behind the stone[s] and tree[s], and the rock or tree will say O Muslim, O servant of Allah, This is a Jew behind me, so come and kill him. Except the Gharqad, being one of the Jews’ trees.’”

Article 22 accuses “the enemies” of taking over world media “with their money”; starting both world wars, as well as the French and Russian revolutions, also by means of money; standing behind Freemasons and Rotary clubs etc.

Article 28 accuses “the Zionists” that “they aim at undermining societies, destroying values, corrupting consciences, deteriorating character and annihilating Islam. It [Zionism] is behind the drug trade and alcoholism in all its kinds so as to facilitate its control and expansion.” The article concludes with the assertion that “Israel, Judaism and Jews challenge Islam and the Muslim people.”

Article 32 asserts that “The Zionist plan is limitless. After Palestine, the Zionists aspire to expand from the Nile to the Euphrates. When they will have digested the region they overtook, they will aspire to further expansion, and so on. Their plan is embodied in the ‘Protocols of the Elders of Zion’, and their present conduct is the best proof of what we are saying.”

“In practice, Hamas has been pursuing a radical method since that time, strongly opposing the 1993 Oslo Accords between Israel and the PLO, pursuant to which Yasser Arafat has returned to Gaza the following year. Hamas refused to engage in political life, pursuing the method of suicide operations.

“These operations escalated during February and March of 1996, causing the deaths of 60 Israelis, in response to the December 1995 assassination of Hamas bombmaker Yihya Ayyash. […]

“The failure of the 2000 Camp David summit and the outbreak of the second Palestinian intifada, caused an increase of Hamas’s influence. […]

“Despite being condemned by the Palestinian [Authority] and its head Yasser Arafat, many Palestinians welcomed the wave of suicide attacks which Hamas had carried out during the first years of the second Intifada.”

Omission – While Hamas did indeed murder 60 Israeli civilians in early 1996 in response to the Ayyash assassination that January (rather than in December 1995), it was Ayyash himself who had previously sent suicide bombers to kill at least 45 civilians during 1994-1995. An equally important fact – unmentioned by Kilani – is that Hamas suicide bombings also killed over 400 Israeli civilians in the 2000s.

“Following Hamas ousting Fatah’s presence from Gaza, Israel and Egypt tightened their siege on the Strip”

Omission – 2006-2007 saw a sharp increase in the number of rockets fired from the Strip on Israel’s civilian population, described in detail in the official Israeli September 2007 announcement which proclaimed the Strip “hostile territory” and consequently subject to blockade.

“With the help of Syria, Iran and Qatar, Hamas tried to combine controlling the Strip and persisting with its operations against Israel, however it ceased the suicide attacks and was content with firing rockets, which on most cases caused the deaths of Israeli civilians.”

CAMERA Arabic complaint – Hamas never “ceased” suicide bombing attempts, nor was it ever “content” with killing Israeli civilians solely by firing rockets. Rather, it was Israel (sometimes jointly with the Palestinian Authority) which actively thwarted those continued initiatives. Rare “successes”, resulting in civilian dead or wounded, occurred in 2008 and 2016. Hamas officials commented on both events, reaffirming the movement’s ongoing commitment to suicide bombing as a legitimate method of “popular” resistance.

Furthermore, other ways to murder civilians were also in constant use, with latest example being Eli Kay’s murder by a Hamas “political wing” activist just a week prior to the appearance of Kilani’s analysis. Additional examples of Israeli civilians being murdered by Hamas members (as well as one UK citizen, Mary Jane Gardner) took place in  2010, 2011, June 2014, November 2014, 2015, 2016 and 2018. None of these incidents appeared in the BBC article.

“With the help of Syria, Iran and Qatar, Hamas tried to combine controlling the Strip and persisting with its operations against Israel. The rocket firing operations, which on most cases caused the deaths of Israeli civilians, intensified, in exchange of a receded pace of suicide bombings. Since 2008 Hamas claimed no responsibility for any suicide attack while Israel announces it thwarts plans to carry out these attacks, arresting or killing the planners who belong to Hamas”.

While that amendment brings some improvement, BBC Arabic’s new phrasing still falls short of acknowledging Hamas’s post-2008 terrorism by means other than rockets and suicide bombings. In all of the cases noted above, including the attack that killed British citizen Ms. Gardner, Hamas acknowledged that the culprits belonged to its ranks, calling them “martyrs” and “heroes” and expressing joy at the innocent lives they had deliberately taken.

“Tension returned once more against the backdrop of the Israeli government’s decision [sic] to evacuate homes of Palestinians in the Sheikh Jarrah neighborhood in Jerusalem, triggering a new confrontation which lasted 11 days in May 2021.”

Omission – Mahmoud Abbas’ cancellation of the Palestinian elections was the main factor behind the May 2021 escalation. Promotion of the Hamas narrative concerning the background to that round of conflict has been evident in additional BBC content and is not unique to Kilani.

“In a 2017 press conference from Doha […] the movement has announced the amendment of its charter, saying it accepts a 1967-borders Palestinian state, without announcing its recognition of Israel or relinquishing its right to what it describes as Historic Palestine.”

CAMERA Arabic complaint – Hamas never amended its 1988 charter. As BBC itself correctly reported at the time, the 2017 “Document of General Principles and Policies” does not replace the original Hamas Charter and that was confirmed by senior Hamas officials later on. Nor can the new document be viewed as “revising”, “amending” or “supplementing” the charter (e.g. like an amendment to an existing constitution) since it makes no reference to it whatsoever.

“In a 2017 press conference in Doha […] the movement announced of a new policy document, where it said it accepts a 1967-borders Palestinian state, without announcing its recognition of Israel or relinquishing its right to what it describes as Historic Palestine.”

“Lands where the State of Israel was established in 1984”

“Israel has accused several media institutions and research centres that they belong to the movement, among them the Palestinian Return Centre, run by Tareq Hammoud. Hammoud denies any connection between the centre and Hamas”

Omission – Israel is not the only party to categorise the PRC is a part of Hamas’ European network. In 2013 an intelligence service report by German Ministry of Interior reached the same conclusion (German PDF; NGO Monitor has translated the relevant part into English and also added more details about the PRC’s Hamas connections).

Before moving into the UK in the mid-2010s Tareq Hammoud was a community leader among Palestinians in Syria. In 2010, he was interviewed (p.23) by a Swiss NGO which referred to him as “another leader of Hamas”.

Readers of the article are not informed that Kilani is himself a Syria-born Palestinian who has covered events in that country throughout the past decade. In 2008 Kilani featured a Palestinian Return Centre article on his own personal blog.

CAMERA Arabic has previously called into question Kilani’s impartiality in coverage of Israel-related affairs on the basis of his social media record. Nevertheless, BBC Arabic turned to Kilani for supposedly accurate and impartial analysis of Hamas’ relations with the UK.