Regular readers are no doubt familiar with the BBC’s penchant for erasing history prior to June 1967 in reports relating to Jerusalem, Judea & Samaria and the Golan Heights. That indulgent omission was once again on display in several radio reports aired over the slow news holiday period of December 26th and 27th. [emphasis in italics in the original, emphasis in bold added]

Newsreader: “The Israeli government has approved a plan to double the population of the Golan Heights – territory captured from Syria more than 50 years ago and later annexed. In 2019 the United States became the first country to recognise the Golan as Israeli and most of the world still considers it occupied land. Speaking at a cabinet meeting there, Israel’s prime minister Naftali Bennett said more than £200 million would be allocated for the development of two new communities.”

Mr Bennett did not say that “more than £200 million would be allocated for the development of two new communities”. As reported by the Times of Israel:

Another NIS 160 million ($51 million) is to be invested in infrastructure and transportation, to improve the quality of life in the Golan Heights.”

Later the same day, listeners to the BBC World Service radio programme ‘Newshour’ heard an item (which did include useful analysis by a guest, from 18:36 here) introduced by presenter Rob Young as follows:

Young: “Now to the Middle East where the Israeli government has approved a plan that aims to double the number of Jewish settlers in the occupied Golan Heights. Israel captured the territory from Syria in 1967 and annexed it in 1981. Israel’s prime minister Naftali Bennett announced a vast investment plan that, he said, would transform the area.”

No evidence was provided to support the BBC’s claim that the plan to increase the population of the Golan Heights is limited to “Jewish settlers” rather than all Israelis.

The same story was the lead item in two editions (from 00:42 here and from 00:34 here) of the BBC World Service radio programme ‘Newsday’ on the morning of December 27th. The synopsis to the first (curiously titled) edition again misleads with regard to the level of investment in what the BBC chooses to pejoratively term “settler homes”. 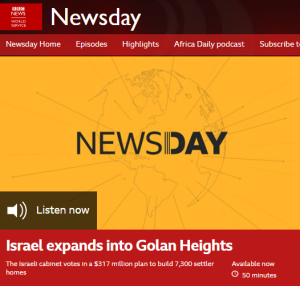 “The Israeli cabinet votes in a $317 million plan to build 7,300 settler homes in the area. Seized from Syria in 1967, it’s regarded by much of the world as occupied territory.”

Presenter Rahul Tandon introduced the item as follows in the earlier edition:

Tandon: “But let’s start the programme in Israel where the prime minister there Naftali Bennett’s cabinet voted in favour of the plan that aims to build 7,300 settler homes attracting roughly 23,000 new Jewish settlers to the Golan Heights over a five-year period. Half of the designated $317 million will be allocated to planning and housing and the balance to developing transportation, education, medical services, tourism, agriculture and industry.”

In the introduction to the second edition listeners were told that: 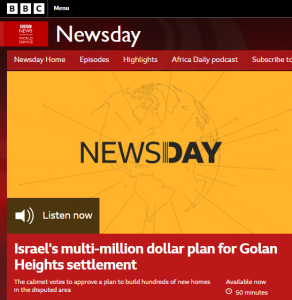 Tandon: “Today we’ll be looking at Israel’s decision to increase the Jewish population of the Golan Heights: a controversial move for land many consider to be occupied territory.”

Once again no evidence was provided for that claim.

The items in both editions consisted of an interview with one person, presented as “the Middle East reporter Rachel Benaim”.

Although Benaim usually focuses on reporting on climate and religion, she began with a ‘potted history’.

Benaim: “The Golan Heights refers to the northern part of Israel or a southern part of Syria depending on who you ask. The Golan Heights were captured, slash, occupied – choose your language – by Israel from Syria in 1967 during the Six Day War. If you recall – a brief history lesson – Israel and Egypt were at war. Other neighbouring countries got involved and Syria ended up losing the Golan Heights, conceding the territory during the war, and Israel has occupied it ever since.”

Regarding the Israeli government’s plan for development of the Golan Heights, Benaim told listeners that:

Benaim: “The plan includes some thousands more housing units being added around certain settlements in the north, schools, hospitals, highways, train infrastructure as well as solar panels and other environmental efforts. That said, the plan is obviously incredibly controversial.”

Benaim did not elaborate on that curious reference to “train infrastructure” in an elevated area unconnected to any of Israel’s railway lines. The item continued:

Tandon: “Yeah. You outlined the history at the start of this conversation. In terms of it being controversial, give us an idea of some of the reactions that have begun to come in.”

Benaim: “Absolutely. So as I’m sure you can imagine, Ahmed Tibi, a member of the opposition in Knesset – he’s not part of the current – the Israeli Knesset – he’s not part of the current government – spoke out and said you know this is occupied territory, we cannot do this. And his call has kind of been echoed by the Arab world as well as many parts of larger liberal society. All say that it really is morally wrong for Israel to expand and continue to settle this area.”

By “the Arab world” Benaim apparently meant Syria and her reference to unspecified “liberal society” apparently meant people with very specific ideas about where Jewish Israelis should or should not be allowed to reside, have decent public transportation, medical services and employment opportunities.

As we see, none of the BBC’s reports on this story make any attempt to inform audiences what happened before June 1967 and why Israel captured the Golan Heights.

“In the years and months leading up to the 1967 war, Syria had played a crucial role in raising tensions by engaging in acts of sabotage and incessantly shelling Israeli communities. The second half of 1966 and spring of 1967 saw increasing friction and incidents between the IDF and Syrian forces. […]

By 1967 more than 265 artillery pieces were aimed down at Israel, and on the plateau itself Syria had constructed a dense network of fortifications, trenches and concrete bunkers with overlapping fields of fire, all sitting behind dense mine fields. Just before the outbreak of the war the Syrians forces in the Golan totaled over 40,000 troops with 260 tanks and self-propelled guns, divided up among three armored brigades and five infantry brigades. Facing them, the Israelis were heavily outgunned, with just one armored brigade and one infantry brigade. […]

During the first day of the war, on June 5, Syrian planes attacked communities in the north of Israel, including Tiberias, and attempted to attack the Haifa oil refineries. The Israeli air force responded later that day with an attack on Syria’s airbases, destroying 59 Syrian aircraft, mostly on the ground.

In the early morning hours of June 6, however, Syria intensified its attacks, launching a heavy artillery barrage against Israeli civilian communities, and then sending two companies of infantry across the border to attack Kibbutz Dan. […]

On June 8, the fourth day of the war, Syria accepted a UN cease-fire, and for five hours there was a lull in the shelling. But then the barrages resumed, and state radio announced that Syria did not consider itself bound by any cease-fire.”

There is of course nothing new about that: the BBC practice of erasing that relevant history has been repeatedly documented on these pages. There is also nothing novel about the BBC’s use of partisan terminology such as “settler homes”, “Jewish settlers” and “settlements”.

However those editorial choices – together with the use of wording such as “controversial” and “morally wrong” – provide clear indication of the one-sided framing that the BBC has elected to advance on this story about the Israeli government’s plan to invest in a rural area with currently inadequate infrastructure.