The January 1st 2022 edition of the BBC Radio 4 programme ‘From Our Own Correspondent’ was described as bringing listeners “stories of loss, recovery and of attempts to rebuild from the US, Gaza, India, and Fiji”. 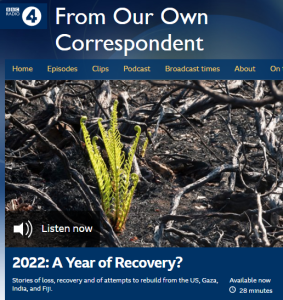 “There was plenty of destruction in 2021 that did not come from nature, war continuing to take its toll in many parts of the world. Ethiopia and Yemen were perhaps the worst examples, but there were also small-scale conflicts, like the insurgency in Myanmar. Then there were the conflicts which never really went away, like that between Israel and the Palestinians. An exchange of rocket fire with Gaza back in May, along with Israeli airstrikes, left more than two hundred dead, the overwhelming majority on the Palestinian side. When Tom Bateman went to Gaza, he met a woman trying to restart her life as a sculptor.”

That clumsily worded and of course inaccurate suggestion that rocket fire was ‘exchanged’ between Israel and the Gaza Strip also appeared in the introduction from presenter Kate Adie (from 06:26 here). [emphasis in italics in the original, emphasis in bold added]

Adie: “And then there are conflicts which never really went away, like that between Israel and the Palestinians. An exchange of rocket fire with Gaza back in May, along with Israeli airstrikes, left more than 200 people dead, the overwhelming majority on the Palestinian side. That said, this didn’t lead to the full-blown return to war which some predicted. A ceasefire was reached and, as always, ordinary civilians were left trying to rebuild their lives from the ruins left behind. When Tom Bateman went to Gaza he met a woman who has managed to pick up and continue her work as a sculptor.”

Bateman’s item showcases a young woman whose political sand sculptures have also been promoted by outlets such as the Hamas linked MEMO and Electronic Intifada.

Bateman: “When Rana al-Ramlawi was born, so was a era of hope. She was a baby in Gaza in the years after the Oslo Accords were signed in the 90s. In spite of surging violence, international hopes were pinned on a future two-state solution between Israelis and Palestinians. As Rana’s mother held her newborn daughter, the family saw the first glimmers of self-governance for Palestinians. Israel withdrew troops from some parts of the occupied territories in exchange for promises of security. As Rana grew, so did some optimism for the years ahead. But in Gaza, the future hasn’t happened yet.”

Failing to provide any context to the Hamas-initiated violence of May 2021 or the reasons why multi-storey buildings were targeted, he continued:

Bateman: “I met Rana this summer, shortly after the latest bout of war between Israel and Hamas, the militant movement which governs the Strip. She’s in her mid-twenties, living with her parents and her eight brothers and sisters in the densely packed outskirts of Gaza City. On the way I passed countless sites of destruction from the eleven-day conflict in May. A tower block is flattened, concrete floors concertinaed into the ground. People on every street had felt fear, the rumble of war planes and the blast of airstrikes. They heard the woosh of Palestinian militant rockets flying in the other direction, causing fear and torment, targeting towns in Israel.” […]

The munitions described by Bateman as “Palestinian militant rockets” cause much more than “fear and torment” with thirteen people having been killed, over a hundred injured and many made homeless. Nevertheless, Bateman failed to name those deliberate attacks on Israeli civilians as terrorism or the ‘militant movements’ that fired them terrorists.

Bateman: “Optimism in Gaza is in short supply but it can be found, here and there, in the respite of the ceasefire, in the prospects of rebuilding – at least until the next conflict. In this in-between time, Egyptian money is helping supply diggers to clear rubble. But the tangled politics of Cairo’s relations with Hamas have delayed much rebuilding. Hope, as everyone says here, is in the will of god.” […]

Bateman employed the “Israel says” formula to unnecessarily qualify his portrayal of anti-terrorist measures employed by Israel and Egypt.

Bateman: “Most of her sculptures show ordinary people in extraordinary events. […] One depicts a child on a woman’s shoulders with the family’s belongings to show the story of refugees. Another shows people aboard a boat, highlighting Gaza’s suffocating blockade which affects everyone here. Israel says it imposes it to stop weapons reaching Hamas. In this artwork, the boat is pulled by her depiction of an Italian activist who helped Gaza’s fishermen but was murdered by Islamist extremists a decade ago.”

That “Italian activist” was Vittorio Arrigoni of the Hamas supporting ISM.

Bateman: “I ask her why she works with sand. ‘Because it’s the only material that is abundant in Gaza’, says Rana. […] Rana carries on sculpting. A crying child emerges behind toppled bricks. She spray-paints flames in red and yellow on the sand around them and the words ‘war Gaza 2021’. […] People here always felt their future would become more permanent than the present. But they only ever seem to see it all collapse again.”

Bateman’s one-sided five-minute ‘report’ on the Gaza Strip obviously fails to provide BBC Radio 4 listeners with anything even approaching the whole story. It does however provide an example of how the BBC continues to promote its chosen framing of the May 2021 conflict and the Gaza Strip in general.