It ended up being a mad dash to get here before the borders closed, but! today is my first day in Jerusalem with a new staff gig for @guardian.

Here are the stories she published during her first five weeks in the position: 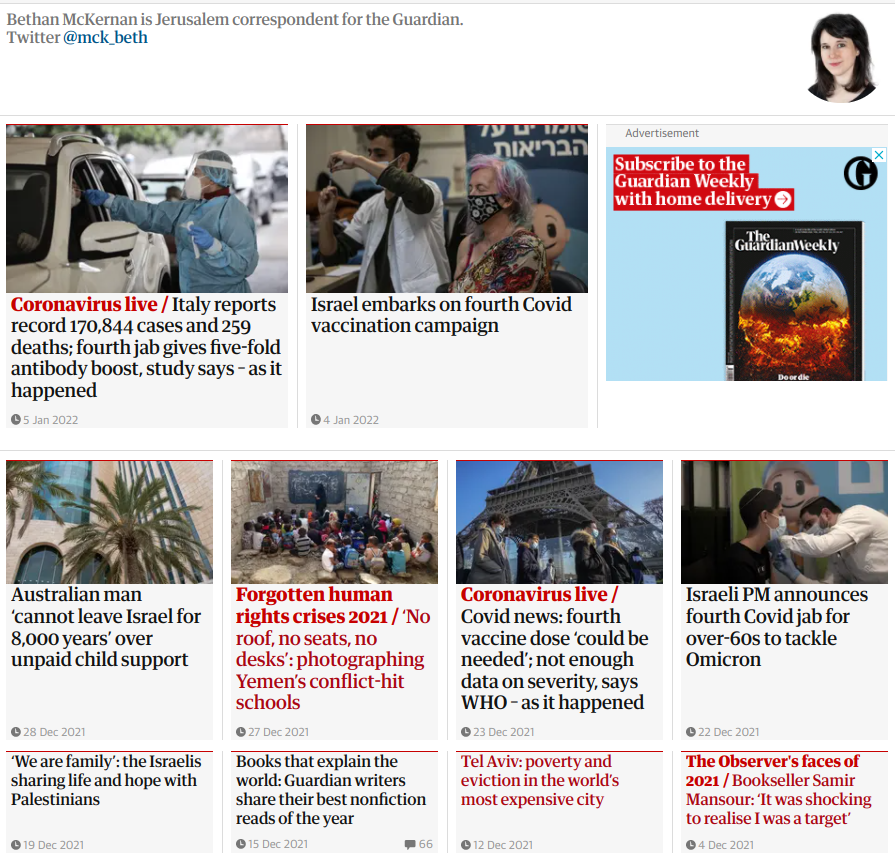 As you can see, not one of the articles has focused on Palestinian terror, despite the fact that, during that time, there have been multiple attacks.

Here are some* examples:

Dec. 4: A 20 year old Israeli man was seriously injured after being stabbed multiple times by a Palestinian in Jerusalem.

Dec. 6th: An Israeli security guard was seriously wounded in a car-ramming attack at the Te’enim Checkpoint in the West Bank.

Dec. 16th: Palestinians ambushed a car driving near Homesh in the West Bank. Yehuda Dimentman, 25, was killed and two other Israelis wounded.

Dec. 18th: A 38-year-old Israeli was injured in a stabbing attack by a Palestinian woman near the Cave of the Patriarchs in Hebron.

Dec. 29th: An Israeli civilian was injured by sniper fire from terrorists in Gaza.

(*These are merely the ‘major’ attacks, rocket fire from Gaza, or attacks which resulted in an injury or fatality.  In December, as in most months, Israel’s Security Agency documented over 100 ‘unsuccessful’ attacks in Judea and Samaria.)

In all of McKernan’s reports, the only time she mentioned any of these attacks was in a Dec. 19th article about Israeli settlers violence, The two sentences were buried in the 13th paragraph of the 1545 word article:

The Palestinians can also turn to violence. Earlier this week, gunmen ambushed a car with Israeli license plates as it left Homesh in the northern West Bank, killing a 25-year-old and wounding two others.

To put it in context, since Dec. 1st, the Guardian’s Jerusalem correspondent has devoted 34 words, in total, to the issue of Palestinian terror.  Though our colleague Hadar Sela consistently documents the BBC’s under-reporting of terrorism, McKernan’s failure to report such extremist violence targeting Israeli Jews – one of the main factors perpetuating the conflict – takes such whitewashing to the next level.