A report which appeared on the BBC News website’s ‘UK’ page late on the evening of January 8th under the headline “BBC seeks swift response to bus anti-Semitism story complaints” opens by telling readers that: 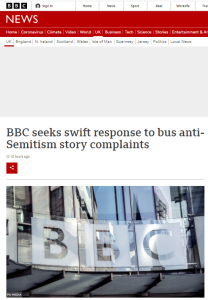 “Complaints about how the BBC reported on an alleged anti-Semitic incident on a bus will be dealt with “as swiftly as possible”, the corporation has said.” [emphasis added]

Those complaints relate to reports put out by the BBC over a month ago on December 2nd 2021:

Readers of this latest report are told that:

“The Board of Deputies of British Jews has since complained about how the BBC covered this story.

Culture Secretary Nadine Dorries has written to the broadcaster asking how it will resolve this.”

The BBC’s report does not provide any details of the complaint made by the Board of Deputies of British Jews and neither does it mention the independent analysis of the video recorded inside the bus that was commissioned by the Board. That analysis undermines the allegation made in BBC reports according to which “we at BBC London did watch this footage and you can hear some racial slurs [sic] about Muslim people which does come from the bus” and  “it’s not clear at the moment…what role that may have played in this incident”.

Neither does this BBC report provide any further information concerning Ms Dorries’ letter to the BBC Director General or the fact that, according to the Times, OFCOM has also approached the BBC on the same topic.

The BBC’s recent demand (reported by the Jewish Chronicle) that lawyers representing victims of the attack reveal their names is also not mentioned in this article.

“Lawyers acting for the victims wrote to the corporation to contest the BBC’s claim that one of them had said “dirty Muslims” as their bus was attacked by thugs during Chanukah last year.
In a letter, the BBC replied: “We will be unable to substantively further progress your legal complaint until you identify your clients.”

Leading legal expert Lord Carlile told the JC: “It is wholly unacceptable for the BBC to try to force frightened teenagers to reveal their names, particularly as there is film of the incident anyway. It is not part of a civil action. All they are doing at this stage is seeking answers from the BBC and an apology.””

However, 40% of the word-count of this latest BBC report is given over to promotion of statements from the BBC itself:

“Responding to the criticism of its reporting, a BBC spokeswoman said: “Anti-Semitism is abhorrent. We strive to serve the Jewish community, and all communities across our country, fairly. As we have stated previously, our story was a factual report that overwhelmingly focused on the individuals the police want to identify; those who directed abuse at the bus.

“We know that there are some strong views about this report. We take complaints very seriously and they are being taken through our complaints process.

“[Director general] Tim Davie has instructed that this process is accelerated to the Executive Complaints Unit, which is editorially independent from news, and will ensure the complaints are fully responded to as swiftly as possible.””

Members of the BBC’s funding public may wonder how this article’s overwhelming focus on the corporation’s own statements complies with the section of the BBC editorial guidelines on impartiality relating to stories “Where BBC Content or the BBC is the Story”.

“4.3.13 When dealing with issues concerning the BBC, our reporting must remain duly impartial, as well as accurate and fair. We need to ensure the BBC’s impartiality is not brought into question and presenters and reporters are not exposed to potential conflicts of interest. When reporting on the BBC, it will normally be wrong to refer to the BBC as either ‘we’ or the content as ‘ours’. There should also be clear editorial separation between those reporting the story and those responsible for presenting the BBC’s case.” [emphasis added]

Mr Davie’s instruction to accelerate complaints to the ECU comes ahead of a meeting with the Board of Deputies later this month which is also not mentioned in this report.

The BBC complaints procedure is well known to be painfully slow, inefficient and inconsistent. A 2020 survey by the Campaign Against Antisemitism (CAA) showed that (p36) over half of those polled said that that they are unsatisfied with how the BBC handles complaints relating to antisemitism.

This latest attempt at ‘damage control’ by the BBC of course does nothing to explain to its funding public why it has chosen to double down on the dubious claims made over a month ago that distorted its reporting of an antisemitic incident.