The first of the five public purposes laid out in the BBC’s Royal Charter obliges the corporation “to provide impartial news and information to help people understand and engage with the world around them”.

Any serious attempt to meet that requirement would obviously include providing audiences with the background information and context necessary to comprehend an issue that is the topic of a particular report or item. Interestingly, the word context is not found in the BBC’s editorial guidelines on impartiality but the subjective term “significant views” does appear repeatedly.

An example of an item in which no effort whatsoever was made to provide audiences with context essential for understanding appeared in the January 8th edition of the BBC World Service radio programme ‘The Cultural Frontline’ titled “Music, politics and identity”. 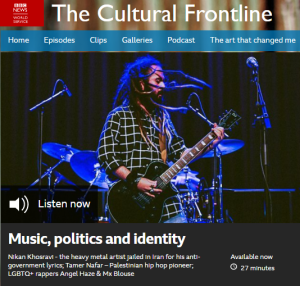 “…Tamer Nafar – the Palestinian hip-hop pioneer who grew up in Israel in a city of Palestinians and Jews, and raps in Arabic, Hebrew, and English about politics, identity, women’s rights, and social justice. He tells Anu [Anand] about the influence of his background and US hip hop, and his new track, The Beat Never Goes Off: recorded with 12 year-old Gaza-based rapper MC Abdul – despite being physically separated.”

In response to a question from Anand about the background to his latest song, Nafar tells listeners that:

Nafar: “I was trying to show that there is still a fight, an optimism. Everybody when you talk about Palestine, all they talk about is gas attacks, bombs, like we don’t exist. Like we exist only when there’s death and war. But sometimes when we create music or when we do movies, it’s like we don’t exist. It’s not like we interest anyone. There is more buzz about us dying than buzz about us doing music, creation.”

Anand makes no effort to question Nafar’s repeated use of the loaded term “gas attacks” or to challenge the absurd notion that attention is only paid to Palestinians “when there’s death and war”. She refrains from informing listeners that Nafar himself appeared in 2019 in BBC content relating to elections in Israel and in a feature about ‘The rise of Palestinian pop’ or that his band appeared at a BBC Arabic film festival in London the same year.

Anand goes on to ask about his collaborator in the video of that song.

Anand: “His name is MC Abdul. He’s twelve and he’s in Gaza and the song features him. Tell me how you made the video because, as you say, he lives in Gaza and he can’t leave.”

Nafar: “We cannot shoot [the video] because of the wall separating us so let’s use the wall to unite us. Let’s put the little kid on the wall and let’s make him bigger than the wall. […] When we recorded the song we were really heading for a sad song because we are talking about a guy from Lydd [sic -Lod] and a kid from Gaza and we can never meet. We cannot literally meet. He lives like 20 minutes [sic – actually over an hour’s drive] away from me and we can never meet. The wall is ugly and he’s more beautiful than the wall.” [emphasis added]

Anand: “You’ve still not met him?”

Nafar: “No, no. You know there’s a hip hop scene in Gaza that I’ve never met. Most of the Palestinians we can meet in London and it makes more sense. We live like ten minutes away but because of the separation that is dividing us, I should fly out and meet him, in case he can leave Gaza.”

Despite those repeated references to “the wall”, listeners are not told that (as is also the case with the anti-terrorist fence in Judea & Samaria) only small parts of the security fence around the Gaza Strip are actually a concrete wall, with those sections located in areas vulnerable to sniper attacks. Listeners are given no information which would help them understand why such security measures had to be taken, with no mention made of the relevant context of the 1994 Gaza-Jericho Agreement, Palestinian terrorism including during the second Intifada, Hamas terror attacks that continue to this day or Israel’s disengagement from the Gaza Strip in 2005.

The result is that an item which according to its webpage will remain available online “for over a year” promotes an entirely one-sided narrative which fails to meet the public purpose of helping audiences “understand the world around them” and simply reinforces partisan and simplistic framing of an extremely complex issue.