Here they are, along with the relevant paragraphs in the article:

The Council on American-Islamic Relations (CAIR)

The hostage-taker referred to Siddiqui as his “sister” on the livestream, but John Floyd, board chair for the Houston chapter of the Council on American-Islamic Relations – the nation’s largest Muslim advocacy group – confirmed Siddiqui’s brother, Mohammad Siddiqui, was not involved.

As we noted in a post yesterday about an earlier Guardian report on the incident which uncritically quoted the organisation, CAIR has a well-documented history of antisemitism and ties to terror. Further, the group has long advocated for the freedom of Aafia Siddiqui, the Pakistani terrorist whose cause – along with antisemitism – motivated Malik Faisal Akram to seize and threaten the lives of four Jewish worshipers in Texas – a fact the Guardian has failed to mention.

Zara Mohammed, secretary-general of the Muslim Council of Britain, condemned the hostage-taker’s actions. She said: “The act is all the more reprehensible since it was instigated at a place of worship where Jews were targeted. This was, quite simply, a hate crime and an act of antisemitism. We are thankful that the hostages are unharmed. Though some may seek to exploit such incidents for divisive ends, we must double our resolve to remain united against such hatred.”

Readers unfamiliar with MCB wouldn’t of course know that, in 2009, a Labour government broke off ties to the group – a ban that subsequent governments upheld.  The primary cause was one a senior MCB official signing a declaration which supported Hamas, promoted violent Jihad “until the liberation of all Palestine” and was interpreted as calling for attacks on British naval vessels, as well as on ‘Zionist Jews’ around the world.

MCB also, for years, boycotted Holocaust Memorial Day, and its leaders have shared platforms with extremists.

This is clearly not an organisation whose views on antisemitism should have been sought.

The incident prompted statements of solidarity from the Jewish community.

“Today we have felt the all too familiar sinking in our hearts, the outrage and horror of witnessing yet another antisemitic attack on a synagogue on Shabbat,” said Stosh Cotler, CEO of Bend the Arc: Jewish Action in a statement.

“We worry that in the days ahead there will be those who try to use our community’s pain and trauma to fuel division or incite violence against other communities – we will not let them. We will reject any attempt, rooted in anti-Muslim bigotry, to hold an entire community responsible for the actions of one individual.”

First, we should be clear that Bend the Arc is nowhere near as problematic as CAIR and MCB.  However, it’s dishonest of the Guardian to frame Bend the Arc, a progressive advocacy group that doesn’t really focus on Jewish issues, as representative of US Jewry, whilst ignoring the views of larger mainstream groups with credibility and influence both within and outside the Jewish community, such as American Jewish Committee, ADL and the Conference of Presidents of Major Jewish Organizations.

In addition to the fact that the quote by their CEO expressed as much outrage over anti-Muslim bigotry that hasn’t happened to the antisemitic incident that did, this recent tweet shows how out of touch they are with the increased fears of American Jews: 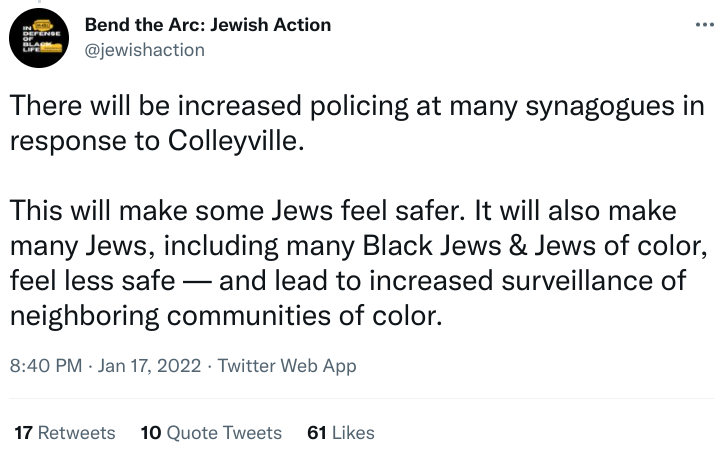 If you’re keeping score: that’s two Muslim organisations the Guardian uncritically quoted – in a story about an antisemitic incident – which have engaged in antisemitism, and one Jewish organisation that isn’t comfortable condemning racism against Jews without imputing intersectional logic which demotes antisemitism to, at most, a second-tier bigotry.