On the evening of January 20th the BBC News website published a report titled “UN defines Holocaust denial in new resolution” on its ‘Europe’ and ‘Middle East’ pages. The article was also translated into Arabic for the BBC Arabic website. 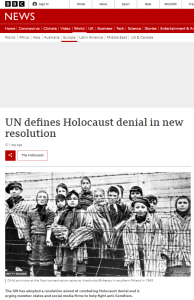 Relating to a UN General Assembly resolution that was passed by consensus on the same day, the report includes the following statement:

“While the resolution was adopted by the UN General Assembly, Iran – a member of the organisation – said it was disassociating itself from the text.”

In fact, the Iranian representative said rather more than that.

“One hundred and fourteen countries cosponsored Resolution A/76/L30 and only Iran publicly voiced its opposition. The representative from the Islamic Republic — whose leaders have a long history of Holocaust denial — claimed the resolution marked another attempt by Israel “to exploit the suffering of Jewish people in the past as cover for the crimes it has perpetrated over the past seven decades against regional countries.”

However, because Tehran has failed to pay its UN membership dues, its delegation has been stripped of some of its rights, and it was therefore unable to call for a formal vote on the Israeli resolution.

As a result, the initiative was approved by consensus.”

The UN’s own documentation of the session includes the following:

“The representative of Iran, speaking in explanation of position ahead of the vote, strongly rejected the attempt to misuse the concept of the Second World War to provide cover for the continuing practices of racism and expansionism, adding: “The Israeli regime has applied both in its policies and practices over seven decades.”  Its brutal crimes against Palestine, which include ethnic cleansing, an inhumane blockage and forced evictions, have continued, he said.  Iran condemns genocide as a crime against humanity.  Therefore, Iran disassociates itself from the text in its entirety.”

The Iranian ministry of foreign affairs subsequently put out a statement describing the resolution as “abusing the international mechanisms by the Zionist regime to cover up its crimes”.

Clearly the BBC’s account does not adequately inform readers of the Iranian attempt to gratuitously shoehorn Israel into discussion of a resolution concerning Holocaust denial and hence does not meet the standards of reporting laid out in the first of the BBC’s defined public purposes.