Given the BBC’s focus on Sheikh Jarrah throughout much of 2021, it was hardly surprising that it chose to report on events that had taken place in that Jerusalem neighbourhood earlier the same day. Neither was it in the least bit astonishing to see that the resulting article follows the same template as previous ones, including the use of a partisan but long-promoted map of parts of Jerusalem – sourced from the political NGO ‘B’tselem’ – which describes the Old City’s Jewish quarter as a “settlement”.

In relation to the story itself, readers are told that: 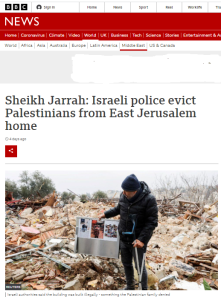 “Israeli police have evicted a Palestinian family and demolished their house in the East Jerusalem neighbourhood of Sheikh Jarrah.

Officers raided the Salhiya family home before dawn, arresting several people before a bulldozer moved in.

There had been a two-day stand-off after the head of the family threatened to blow up his house rather than move.”

The report goes on to provide a ‘he said-she said’ account of the background to those events.

“Israeli officials said the building was illegal – something the family denied – and the land was needed for a school.”

The point of view of the Jerusalem municipality is presented in one hundred words, including a link to a statement.

“Instead, the Jerusalem Municipality said the Salhiya’s house was built illegally in recent years on land designated for a school for Palestinian children with special needs.

“The evacuation of the area has been approved by all the courts, including the Jerusalem District Court,” the municipality and the Israel Police said in a joint statement.

“Since the evacuation order was issued in 2017, members of the family living in the illegal buildings were given countless opportunities to hand over the land with consent, but unfortunately they refused to do so, even after meetings and repeated dialog attempts by the Jerusalem Municipality.””

The point of view of the Salhiya family is presented in seventy words.

“The Salhiya family disputed that their home was built illegally and said that they had lived there since the 1950s.

A lawyer for the family, Walid Abu Tayeh, told AFP news agency that the demolition was illegal because the municipality had only received permission from the court to clear the property. He added that a court had been due to hear an urgent request to stop the eviction on Sunday.”

Unlike readers of the New York Times, BBC audiences are not told that:

“…the Salhiye family is also accused by other East Jerusalem residents of stealing the land from a fellow Palestinian in the 1990s.

Sami Abu Dayyeh, a prominent hotelier, and his lawyer, Elias Khoury, a well-known rights attorney, said the land has been owned since the 1960s by a company later bought by Mr. Abu Dayyeh. Prior to the expropriation by the Jerusalem municipality, Mr. Abu Dayyeh had attempted to evict the Salhiye family to build a hotel.”

The BBC’s article also promotes statements from a variety of other bodies supporting the Salhiya family, including unidentified “activists” who – according to the promoted link – are apparently associated with the political NGO ‘Peace Now’.

“Israeli activists opposed to the eviction pointed out that a nearby plot, which remains empty, was previously taken to build a school and then given to an ultra-Orthodox Jewish organisation for a seminary.”

“Human Rights Watch Israel and Palestine director Omar Shakir said the Salhiyas had been turned into “two-time refugees” because they were expelled from their home in the West Jerusalem neighbourhood of Ein Kerem during the war that followed Israel’s creation in 1948.”

Statements from the Palestinian Authority, the EU, the UK and the British Consulate in Jerusalem are also amplified:

“Palestinian Authority President Mahmoud Abbas called the demolition a “war crime” and warned that the Israeli government “bears responsibility for its dangerous repercussions”.” […]

“The case had drawn international attention, with the European Union and UK warning that evictions in occupied territory were illegal under international law and fuelled tensions on the ground in Jerusalem.” […]

“The British consulate, which is located across the road from the demolition site, tweeted on Monday: “Evictions in occupied territory are against international humanitarian law in all but the most exceptional circumstances.

“The UK urges the government of Israel to cease such practices which only serve to increase tensions on the ground.””

The BBC’s report of course makes no effort to explain to audiences precisely which clauses of “international law” or “international humanitarian law” supposedly preclude the eviction of people who have been shown in court not to be the owners of the relevant property.

As we see, the BBC’s presentation of the Jerusalem Municipality’s stance amounts to one hundred words, while the opposing view gets over two and a half times more coverage: two hundred and fifty-one words.

By way of broader background to the story, readers are told that:

“Both Israel and the Palestinians hold competing claims to the ancient city.

Israel – which occupied the formerly Jordanian-held eastern part in 1967, and effectively annexed it in 1980 in a move not recognised internationally – regards the whole of Jerusalem as its capital.

Palestinian leaders want East Jerusalem – which is home to about 350,000 Palestinians and 200,000 Jewish settlers – to be the capital of a future Palestinian state.” [emphasis added]

As is so often the case in BBC reporting of stories linked to Jerusalem, readers are not told that Jerusalem was included in the territory assigned by the League of Nations for the creation of a Jewish homeland. The 19-year Jordanian occupation – and ethnic cleansing – of parts of Jerusalem is airbrushed by the BBC as usual.

The report ends with amplification of Hamas’ narrative concerning ‘Operation Guardian of the Walls’ in May 2021:

“Back in May, eviction battles in Sheikh Jarrah stoked some of the worst violence between Israeli police and Palestinians in Jerusalem in years.

They also helped spark an 11-day conflict between Israel and the militant group Hamas, which fired rockets at the city from Gaza in what it said was partly a response to Israeli “harassment” in Sheikh Jarrah.”

As previously documented here, the BBC adopted that false narrative at the time and has continued to promote it ever since.

The report promotes four previously published items concerning Sheikh Jarrah or Jerusalem which have been discussed in the ‘related articles’ below.