On January 8th the BBC News website reported that the many complaints it had received concerning reports put out over a month earlier, on December 2nd, would be dealt with “as swiftly as possible”. 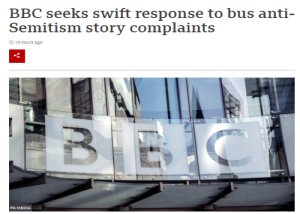 Anyone who has tried to navigate the BBC’s sluggish self-regulating complaints procedure would not be surprised by the fact that, despite intervention from the BBC’s Director General, “as swiftly as possible” took a further eighteen days to produce results.

Prior to the publication of the BBC’s Executive Complaints Unit findings on January 26th, the BBC Director General had held meetings with the UK government’s independent antisemitism adviser, Lord Mann, and the Board of Deputies of British Jews. A former BBC chairman and the UK’s Chief Rabbi had earlier called for the issue to be resolved.

Despite that high-level involvement, nearly two months went by before the ECU issued its findings and clarifications were published.

The ECU’s statement can be found here. A footnote has been added to the written report that was the subject of complaints. 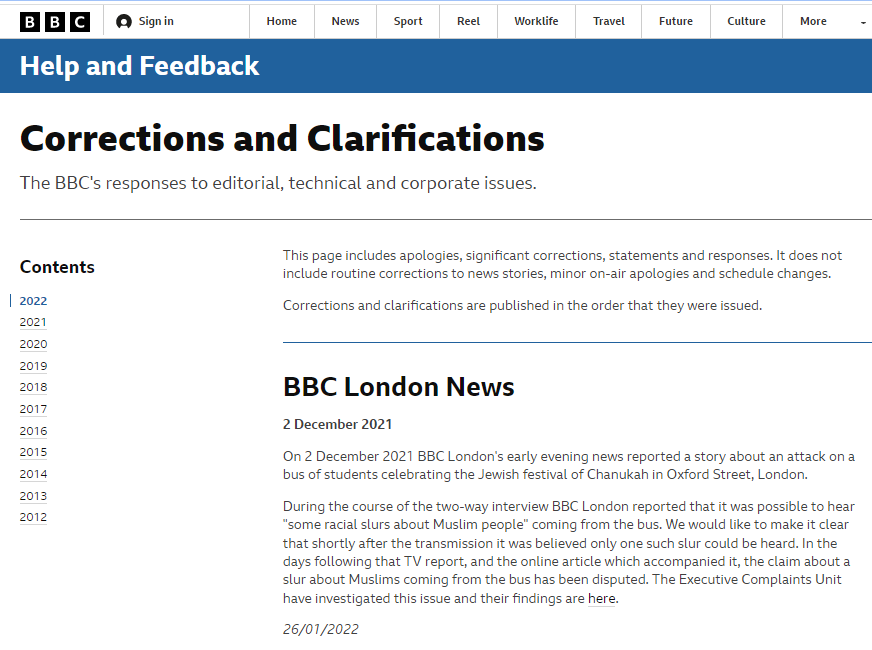 As noted here previously in relation to that filmed report:

“…viewers were told that “we at BBC London did watch this footage and you can hear some racial slurs [sic] about Muslim people which does come from the bus”. The reporter – apparently Guy Lynn of BBC London news – went on to claim that “it’s not clear at the moment…what role that may have played in this incident” despite the fact that the incident began when the Jewish teens handing out donuts and dancing on Oxford Street were abused by others, before they got back on the bus where the footage was filmed.”

“…the reporter in the television item said (in connection with the words supposedly spoken from the bus) “It’s not clear at the moment for the person which said that what role this may have played in the incident”.  As is sometimes the case in unscripted broadcasting, it is apparent that the reporter’s intended meaning was not expressed with complete clarity, but what can be said is that he did not assert that the slur had played a role, and that, at that point in time, there were elements of uncertainty about what had happened which it was appropriate for the report to reflect.  In any event, the reference came towards the end of a piece in which the overriding focus had been on the behaviour of those outside the bus, which was hardly conducive to the view that the passengers shared responsibility for the incident.”

In relation to the video filmed from inside the bus, the ECU claims that:

“The CST became a point of contact about the incident for the media, and it was to the CST that BBC London applied on the morning of 2 December for clearance to use the recording.  In the somewhat unusual circumstances which obtained here [sic], it was inevitable that reporting of the incident would reflect such information as could be gleaned from the recording; and, in the light of the CST’s leading role in relation to anti-Semitic incidents as well as their involvement in the incident in question, it was natural and appropriate that the BBC should turn primarily to the CST for verification (as many other media outlets did).  The ECU has been shown a detailed timeline of events from the moment the BBC became aware of the story on 1 December, and it shows an unusually high level of consultation among colleagues about the content of the recording.  It was on the afternoon of 1 December that it was first identified as containing an anti-Muslim slur (in the form of “Dirty Muslims”), and the recording was subsequently assessed by at least seven members of BBC London news staff and a senior editor in network news, all of whom agreed that the phrase “Dirty Muslims” could be heard, before a decision to include a statement to that effect in BBC output was made.  Properly, however, the BBC did not rely on its own assessment alone.  The claim was put by the reporter in the television item to the representative of the CST with whom he had been dealing, who replied (in a WhatsApp exchange which the ECU has seen) in terms which the BBC took as confirmation that the phrase in question had been spoken and, in the ECU’s judgement, it was entirely reasonable to take them in that sense.”

The Community Security Trust however “completely rejects” that account. 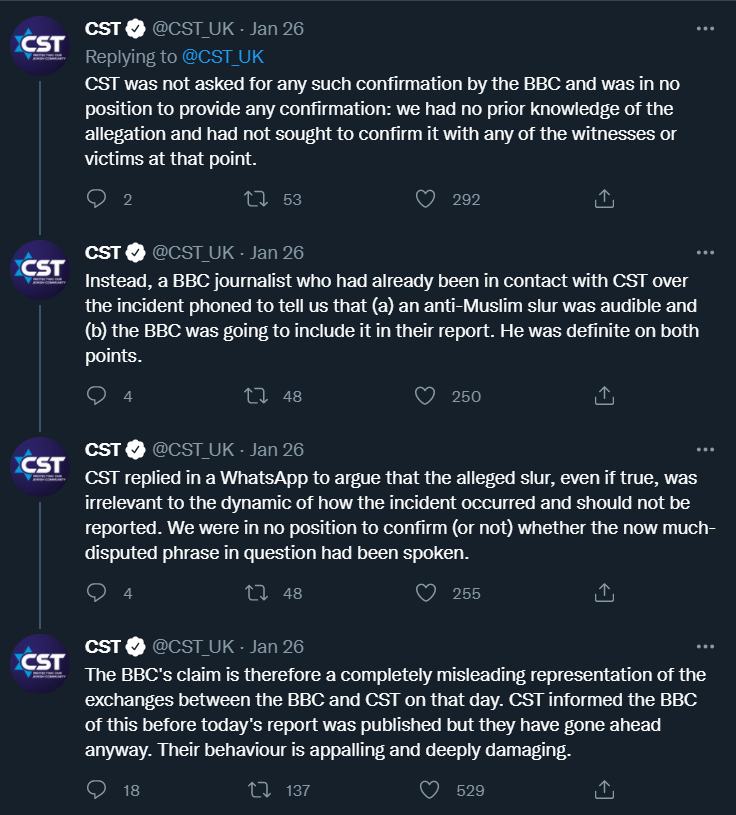 The point made by the CST that “the alleged slur, even if true, was irrelevant to the dynamic of how the incident occurred” is (as we noted in early December) the crux of the matter. The abuse of the Jewish teens began while they were on a central London street, before they were told to get back on the bus by accompanying adults.

The way in which the BBC chose to report the story in its December 2nd written and filmed reports detracted from that fact and shifted the focus of the story to an alleged – and still unproven – “racial slur” heard only by BBC editors. Moreover, even after the publication of the ECU’s partial upholding of complaints, insufficiently accurate reporting continues.

A January 26th BBC Radio 4 ‘Six O’Clock News’ report on the topic of the ECU’s findings (from 23:46 here) further misled audiences by erasing the fact that the antisemitic incident began before the teens were “on a bus” and led listeners to believe that only one complaint had been submitted.

“A report examining the BBC’s coverage of an antisemitic incident in which Jewish students were abused on a bus in central London last year has partly upheld a complaint against the corporation in regard to accuracy and impartiality.” [emphasis added]

An article published on the BBC News website’s ‘UK’ page on January 26th likewise erases the fact that the incident began when the teenagers were subjected to abuse on a London street. [emphasis added]

“Complaints were made about the BBC’s coverage of abuse directed towards a group of Jewish teenagers on a minibus.” […]

“The report related to an incident on Oxford Street on 29 November 2021, where Jewish passengers on a privately hired bus were subjected to abuse. […]

The BBC’s original online article on 2 December claimed “some racial slurs about Muslims” could also be heard in footage of the incident.

The following day, this line was amended to say “a slur about Muslims” could be heard from the bus.”

Of course the sad fact is that – as is all too often the case given the tortoise-like BBC complaints procedure – members of the public who read the BBC’s original website report or watched the BBC London filmed item are highly unlikely to return to an article published on December 2nd in order to read a footnote appended on January 26th or to search online for an obscure webpage carrying a clarification concerning an item they watched on television nearly two months ago.

Over the years we have repeatedly observed that the BBC does nowhere near enough to increase its transparency by demonstrating a clear commitment to ensuring that audiences receive corrected information.

OFCOM announced on January 26th that is conducting an investigation following the publication of the ECU’s findings. In addition to the obvious issue of “due accuracy”, it is in the public interest for the regulator to also address the abiding topic of the BBC’s habit of publishing long-overdue corrections and clarifications in a manner which does not reach the vast majority of the public exposed to under par reporting.

On February 3rd the Jewish Chronicle reported that in relation to the ECU’s findings:

“The BBC has been forced to issue a humiliating correction after implying the Community Security Trust had verified the controversial Muslim slur claim in its controversial report about the Oxford Street bus attack.

The BBC admitted that not only was the corporation itself responsible for any verification of the claim, it “may well have arrived at a decision to include the claim irrespective of … engagement with the CST.””