Amnesty International’s latest report designates Israel as an ‘apartheid’ state. To unpack again why their report is, as CAMERA demonsrated previously, irredeemably flawed, I’ll use this graphic that Amnesty posted this week to highlight three core issues that undermine the validity of their fundamental argument. 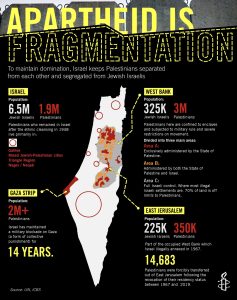 Lies – The claim that Israel keeps ‘Palestinian’ (Arab) Israelis segregated from Jewish Israelis is simply false. There are no physical or legal barriers to movement whatsoever between ‘Palestinian’ and Jewish citizens of Israel.  The graphic even acknowledges that ‘Palestinians’ in Israel live in “Mixed Jewish Palestinian Cities.”

4/ "Israel keeps Palestinians separated from each other and segregated from Jewish Israelis"?

Which Palestinians? Israel's Arab citizens? No, they're not kept separate from their fellow citizens, Jewish or Arab.

In Gaza, Jews were removed from the territory entirely in 2005, so there is no segregation, as the whole area is Jew-free. Residents of East Jerusalem enjoy freedom of movement within West Jerusalem and the rest of Israel.  And in the West Bank, the territory was split and governed separately as part of the Oslo Accords, which was signed by Palestinian leaders.

Simplification – the reason there is “fragmentation” of the Palestinian people is not because of Israeli policy, but because of numerous historical factors – many of which were initiated by Palestinians leaders.  It started with the Arab war against the nascent Jewish state in 1948, when Egypt conquered Gaza and Jordan conquered the West Bank and East Jerusalem.

To this day, the split has many factors, including the internal Palestinian politics of the Hamas-Fatah split.  Blaming all things on an evil Israeli policy is part of a malign and myopic obsession with Israel, rather than an honest assessment of both history and complexities of the contemporary situation. This level of oversimplification would be considered shallow and facile in most contexts. But, in the case of Israel, ignoring all other geopolitical, social and historical factors is the  hallmark of many so-called ‘human rights’ organisations.

Mixing emotional hyperbole with law – The statement “apartheid is fragmentation” is meaningless.  Apartheid is a legal definition, and fragmentation is a vague and evocative word that of course appears nowhere in the Rome Statute of 2002 defining apartheid. The Amnesty report and the rhetoric around it constantly make emotional and dramatic statements. Yet, when challenged, its authors say they are making cold legal arguments based in international law.  By resorting to hyperbole and imprecise phrases with no basis in international law, we can conclude that Amnesty is less interested in ‘cold legal facts’, and more interested in an intellectually unserious rhetorical campaign of attack against Israel.

A campaign based on lies, simplifications and the cloaking of a clear political agenda via pseudo-legal jargon makes a mockery of their claim to advocate for universal human rights.