As we all too often have cause to note here, the page of the BBC News style guide relating to the letter T includes the following:

Nevertheless, since 2014 we have documented repeated cases of BBC journalists ignoring that instruction in favour of the partisan term “al Aqsa Mosque compound” or even just “al Aqsa Mosque”.

Another example of BBC journalists ignoring the corporation’s own style guide was published on the BBC News website’s ‘Middle East’ page on the morning of February 8th.

Titled “The Jews dressing as Muslims to get around a prayer ban” that filmed report is credited to the BBC Jerusalem bureau’s Gidi Kleiman and Yolande Knell as well as Youssef Shomali and Anastassia Zlatopolskai.

Its subject matter relates to a story that appeared in the Israeli media in mid-December 2021 and indeed some of the footage in the BBC’s report is credited to Israel’s Channel 13 TV station. 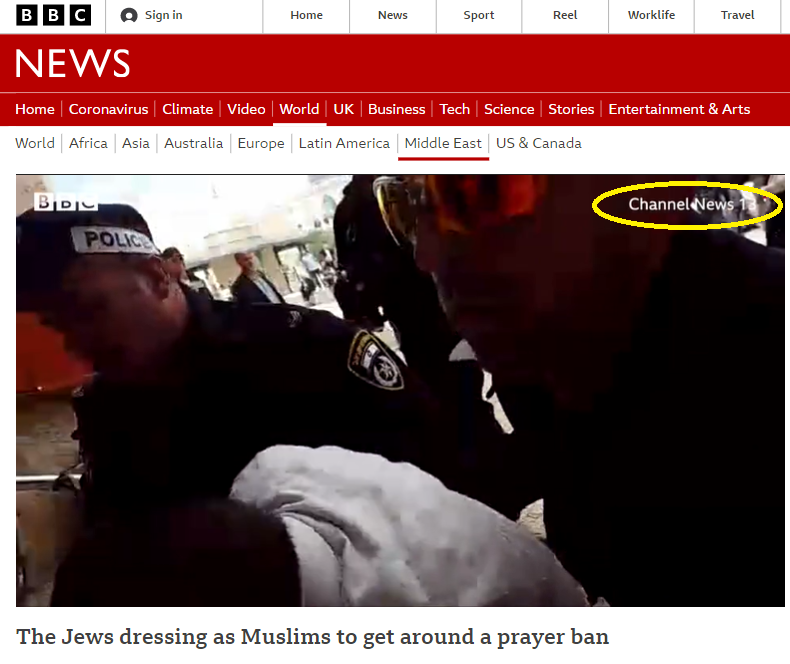 The synopsis to the report fails to comply with the BBC News style guide: [all emphasis in bold added]

“Some extremist Jews reveal that they’ve been dressing as Muslims to enter and worship at a bitterly contested holy site, Temple Mount or the al-Aqsa Mosque compound.

After Israel captured and occupied East Jerusalem in 1967, a delicate status quo remained: non-Muslims can visit the complex but must not pray there.

The BBC has been speaking to Jewish Israeli activist, Raphael Morris, who leads a fringe group called “Returning to the Mount”, which advocates prayer at the site he calls Temple Mount and to a Palestinian Muslim activist, Hanady Halawani who says she will defend al-Aqsa Mosque.”

In the film itself, Halawani is presented as a “Palestinian Muslim activist” and “Quran teacher”. Viewers are told that:

The name of that “illegal Islamist group” is not provided to viewers either at that point or at any other in the rest of the almost four-minute-long film. Viewers are hence denied information concerning Halawani’s connection to the Northern Islamic Movement which was outlawed by Israel in 2015 due to its links to Hamas and its activities on Temple Mount. The Israeli government’s explanation of that ban (which was not reported in English by the BBC at the time) included the following:

“For years, the northern branch of the Islamic Movement has led a mendacious campaign of incitement under the heading ‘Al Aqsa is in danger’ that falsely accuses Israel of intending to harm the Al Aqsa Mosque and violate the status-quo. In this context, the northern branch has established a network of paid activists (Mourabitoun / Mourabitat) in order to initiate provocations on the Temple Mount. This activity has led to a significant increase in tension on the Temple Mount. A significant portion of recent terrorist attacks have been committed against the background of this incitement and propaganda.

Outlawing the organization is a vital step in maintaining public security and preventing harm to human life.”

Interviews given by Hanady (also Hanadi) Halawani to other media outlets show that it is not only Israel that ‘says’ that she is “part of an illegal Islamist group”: Halawani acknowledges it herself.

“Halawani is a “Murabita”, part of an outlawed group of Muslim women (“Murabitat“) with the stated goal of protecting Al-Aqsa Mosque, one of Islam’s holiest sites, from right-wing Jewish incursions.” [source]

“After banning the Islamic Movement, the Israeli occupation also decided to designate some of the self-appointed guardians of al-Aqsa (Murabitat), including myself, as an “unlawful organisation”…” [source]

Dr Shaul Bartal has noted that:

“The founding of the Murabitun in 2010 marked a further step toward realizing [Raed] Salah’s vision. Groups of women and men, mostly from East Jerusalem, began to operate ostensibly as “study groups” but with the real intention of disrupting visits by Jews to the Temple Mount and provoking disturbances in the compound. Groups of women led by Hanadi Halawani, Khadija Hawis, Sahar Natsheh, and others frequently attacked police officers and worshippers on the Mount. These groups gained wide support among Muslim Brotherhood factions in the Arab world and especially among Hamas backers. Donations from Muslim Brotherhood NGOs arrived via Turkey, Qatar, and Lebanon. Halawani and Hawis were repeatedly invited to conferences of al-Kutla al-Islamiya (the Islamic Bloc) at West Bank universities, particularly Bir Zeit near Ramallah and an-Najah in Nablus.”

In other words, the inadequately presented person the BBC found fit to feature in this report was given a worldwide platform from which to advance the Islamist narrative of the northern Islamic Movement without that fact being made clear to audiences.

“Our right to worship in the al Aqsa mosque has unfortunately been attacked.”

“It’s clear that the entry of the settlers in disguise at al Aqsa hides aggression and terrorises Muslims praying in the mosque. It’s clear it’s political.”

“As a Muslim I enter a mosque and I’m searched. The Occupation police enter the mosque armed and protect the settlers [sic].”

“As long as there are Muslims here and they are in al Aqsa mosque, no matter how much the Occupation allows the Jews to enter al Aqsa mosque, they will not be able to do anything.”

The BBC’s film makes no effort to clarify to viewers that Jewish visitors to Temple Mount do not “enter al Aqsa mosque” – presumably because that claim from Halawani relies on the characterisation of the whole of Temple Mount/Haram al Sharif as “al Aqsa mosque”, just as BBC journalists have themselves done all too often in recent years.

The written narration added by the BBC in between the interviews includes:

“This is the most sacred place in Judaism and the third holiest in Islam. Tensions here often ignite fighting between Israel and Palestinians. So Jews impersonating Muslims are seen as very provocative”.

No mention is made of the no less “provocative” rioting and terror attacks that have taken place at the site.

“Israel captured this site from Jordan in the 1967 Middle East war. It began allowing Jews to visit but not to pray.”

As usual the BBC erases all history prior to June 1967, fails to clarify that the ban on prayer also includes Christians and makes no effort to discuss its discriminatory nature.

Moreover, Yolande Knell also produced an audio version of that report which was aired on the BBC World Service radio programme ‘Newsday’ on February 8th (from 06:30 here). In that version too, audiences heard presenter Sana Safi breach the BBC News style guide.

Listeners are told of “a dangerous new development” that is Jews going up to Temple Mount in what Knell describes as “Palestinian dress”.

Audiences again hear from Halawani and are told that:

Knell: “…the Israeli authorities have previously barred her from the site. She’s seen as part of an illegal Islamist group but denies doing anything wrong.”

Once again that Islamist group is not named and its record of provoking violence and unrest at the site is not clarified to listeners.

The bottom line of these reports is that the BBC’s Jerusalem bureau recycled a nearly two-month-old story concerning members of a tiny fringe Jewish group that had been reported in the local media, added its own insufficient background and provided an opportunistic platform for the no less extremist narrative of an inadequately identified activist for an Islamist group that is outlawed in the country in which the journalists responsible are based.

DID THE BBC ADEQUATELY EXPLAIN THE TEMPLE MOUNT ‘STATUS QUO’?