On the afternoon of February 8th the BBC News website speedily produced a report about a counter-terrorism operation which had taken place some hours earlier. 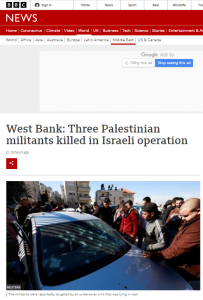 “Three Palestinian men accused by Israel of carrying out a spate of attacks have been shot dead in an Israeli operation in the occupied West Bank.

The military wing of the Palestinian Fatah faction confirmed that the dead men were its members and said they were killed in “a cowardly assassination”.”

Only in paragraph eight (of thirteen) do readers find out that by “[t]he military wing of the Palestinian Fatah faction” the BBC means the al Aqsa Martyrs Brigades.

“It is rare for operations like this to take place in the daytime, the Times of Israel newspaper reports. It says it is also unusual for the targets to belong to the al-Aqsa Martyrs’ Brigades.”

No further information is provided to explain that last sentence or to give readers any background on the al Aqsa Martyrs Brigades. In contrast to the Times of Israel article it quotes, the BBC’s report does not bother to clarify that Fatah is the dominant faction in the Palestinian Authority.

The BBC’s profile of Fatah – which has not been updated for well over a decade – tells readers that:

“The second intifada saw a number of armed groups associated with Fatah emerge, most notably the al-Aqsa Martyrs’ Brigades. The Brigades are neither officially recognised nor openly backed by Fatah, though members often belong to the political faction.

During the intifada, the Brigades carried out numerous operations against Israeli soldiers and settlers in the West Bank and Gaza, and suicide attacks on civilians inside Israel.” [emphasis added]

If the BBC has now reached the conclusion that the al Aqsa Martyrs Brigades is “the military wing of the Palestinian Fatah faction”, that profile clearly needs to be updated.

Additionally, the BBC did not bother to update its report to inform audiences of the related attempted lynching of an Israeli taxi driver who entered Nablus (Schem) a short time after the operation had taken place.

NO BBC REPORTING ON TERROR ATTACKS BY PA EMPLOYEES