On the morning of February 16th the BBC News website published an article by the Jerusalem bureau’s Tom Bateman titled “Naftali Bennett: Warm welcome for Israeli leader in Bahrain”. 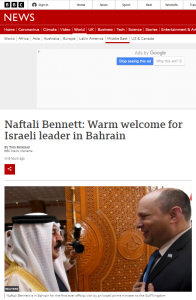 Most of that report filed from the capital of Bahrain, Manama, relates to the Israeli prime minister’s recent visit there, with Bateman part of the accompanying press contingent.

However towards the end of the article, readers find one of Tom Bateman’s recurring talking points.

“But left most isolated by the new diplomacy are the Palestinians. They see normalisation with Israel as a betrayal by Arab leaders of their hopes for an independent state. Their cause remains a touchstone issue for many ordinary people in the Arab world.”

The same narrative of “betrayal” was repeatedly promoted by Bateman two months ago when Israel’s prime minister visited the UAE:

That narrative has been advanced by the BBC’s Jerusalem bureau ever since the Abraham Accords were signed in the summer of 2020:

REVIEWING BBC AMPLIFICATION OF THE NOTION OF ‘BETRAYED’ PALESTINIANS

In fact – as noted by another journalist accompanying the delegation to Manama:

“In the last decade, through a series of discreet surveys carried out across the region, they [Gulf leaders] reached the conclusion that the levels of support for the Palestinians and antipathy toward Israel were not as clear-cut as had previously been assumed. […]

In 1979, when Egypt made peace with Israel, it was expelled from the Arab League and President Anwar Sadat was subsequently assassinated. When the Abraham Accords were signed, none of the Arab League members – with the exception of the Palestinian Authority and the suspended Syrian regime – protested. Not only did widespread protests fail to materialize, but Morocco and Sudan soon joined as well.”

Nevertheless, the BBC’s Jerusalem bureau continues to promote the Palestinian narrative of “betrayal”.

Another simplistic narrative is promoted in Bateman’s penultimate paragraph:

“During the trip, Mr Bennett’s officials kept him updated on a fresh flare-up in tensions in the East Jerusalem neighbourhood of Sheikh Jarrah, where Palestinian families face eviction from their homes to make way for Jewish settlers.”

Bateman did not bother to clarify that the “fresh flare-up in tensions” began when the home of a Jewish family in Sheikh Jarrah was firebombed.

While it is not clear to which “Palestinian families” Bateman refers, his reduction of several long-running legal cases concerning properties in Sheikh Jarrah to the zero-sum-game of “eviction…to make way for Jewish settlers” clearly indicates that he does not intend to present the topic in accurate and impartial terms which would enhance reader understanding, but to promote a partisan narrative.

Two days before the appearance of this article Bateman visited Sheikh Jarrah which he described on social media as “home of #Palestinian family the Salems, due to be a evicted in weeks”.

Neither on social media nor in this article did he bother to clarify that the story concerning the house inhabited by the Salem family goes back decades.

“The Salem home […] was once inhabited by the Jews who settled in the Nahalat Shimon community in the 19th century.

East Jerusalem fell under Jordanian occupation after the war, and Palestinian refugee families settled in some of the Nahalat Shimon homes, which became part of the Sheikh Jarrah neighborhood. But the Jordanian government never transferred the properties to their new residents, meaning that Israeli law allowed the original owners — the Jewish Haddad family — to reclaim them. […]

After the Haddad family reclaimed the house, there was a court battle that continued for several years. The Jerusalem district court apparently issued an eviction order in 1987. But the order was neither enforced nor cancelled; the Salems continued paying rent to the Haddads through the court, according to their lawyer.

Legally, matters only get murkier from here: like other sensitive proceedings, the case files were destroyed when the statute of limitations expired years later. And none of the parties possesses the original court ruling granting the Haddads the right to evict the Salems. The only extant document is a copy made in gray pencil. […]

When [Yonatan] Yosef bought the house from the Haddads, he successfully won a new eviction order from Israel’s civil enforcement agency.”

In other words, according to Tom Bateman’s chosen narrative, the legal owner of the property concerned is a ‘Jewish settler’ simply because the location of the house he purchased was illegally occupied by Jordan for 19 years.