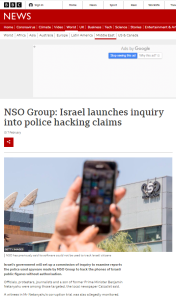 “Israel’s government will set up a commission of inquiry to examine reports the police used spyware made by NSO Group to hack the phones of Israeli public figures without authorisation.

Officials, protesters, journalists and a son of former Prime Minister Benjamin Netanyahu were among those targeted, the local newspaper Calcalist said.”

That article is based on the report published by the Israeli business newspaper ‘Calcalist’ and the BBC’s article links to its English language version. Over 200 words of the BBC’s report are given over to amplification of the unevidenced claims appearing in the Calcalist report, with nothing to suggest that the BBC had fact checked those allegations before reproducing them.

“3.3.13 Material supplied by third parties, including news providers, needs to be treated with appropriate caution, taking account of the reputation of the source.

We should normally only rely on an agency report if it can be substantiated by a BBC correspondent or if it is attributed to a reputable news agency.

We should only use other material supplied by third parties if it is credible and reliable.”

Two weeks after the appearance of that BBC article findings from an interim investigation into the allegations published by Calcalist and amplified (albeit with qualification) by the BBC were made public.

“A probe into shocking allegations that Israel Police illegally used spyware on the phones of citizens found “no indication” that any such hacking took place.

A Justice Ministry investigation into the claims, headed by Deputy Attorney General Marari, was established in the wake of a bombshell report in the Calcalist news outlet last month that police were using the NSO Group’s Pegasus spyware without any judicial oversight. Earlier this month, Calcalist reported, without providing evidence, that dozens of high-profile figures — including former ministry directors, prominent business figures and family members and associates of former prime minister Benjamin Netanyahu — were spied on by police.

But interim findings from Marari’s probe — which also included two former Shin Bet officials — found no evidence to support Calcalist’s claims. According to details of the investigation, published on Monday, there is “no indication that the Israel Police used Pegasus without a court order to infect the phone of any of the list of people published in the media.”

Furthermore, a Justice Ministry statement noted that the probe did not uncover any unsuccessful attempts by the police to use Pegasus without judicial oversight, and that it also did not discover any police usage of other similar spyware against the individuals named.”

The source of the BBC’s story swiftly put out a statement:

“In response to the investigation, a statement from Calcalist said that the findings “require serious consideration and reexamination of the findings and allegations we published.” Such an investigation, the newspaper said, is underway, and “when we finish it, we will not hesitate to correct as much as necessary.”” 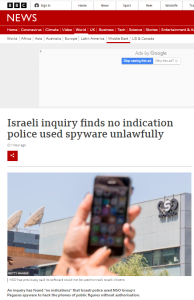 That article once again promotes a link to the English language version of the Calcalist report.

However at the time of writing the BBC News website has not bothered to append a footnote to its February 7th article – which is still available online in its original form – to advise readers that the information the BBC reproduced from an unevidenced third-party newspaper report has been shown to be untrue. Some may call that promotion of fake news.