As we’ll explain in this post, the very headline of a Guardian article by their North of England correspondent Maya Wolfe-Robinson (“Whitworth gallery director Alistair Hudson forced out over Palestinian statement”, Feb. 22) is grossly misleading.

The director of the Whitworth Art Gallery is being asked to leave his post by the University of Manchester, after a row when a statement of solidarity with Palestine’s “liberation struggle” was removed from an exhibition of works by a human rights investigations agency.

The group in question, Forensic Architecture (FA), a group based at Goldsmiths, University of London, as we’ve demonsrated in previous posts, is certainly NOT a “human rights” investigative agency.  They are a radical-left pseudo-research group that, under the veneer of “architecture” and “science”, NGO Monitor has shown, “consistently generates analyses that are inaccurate, misleading, and blatantly prejudiced”.

Alistair Hudson, who heads the Whitworth and Manchester Art Gallery, has been asked to leave by the university, the Guardian understands, after a series of complaints by UK Lawyers For Israel (UKLFI).

There wasn’t a “series of complaints”. As UKLFI made clear, there were two complaints over FA – only one of which concerned the Whitworth Art Gallery.  The complaint to Whitworth was over the accuracy of the FA exhibition in question, and a statement posted on the gallery’s website expressing solidarity with Palestine and support for “decolonialisation”.

The other complaint concerned FA’s entry for the Turner Prize years earlier at the Tate Gallery.  The Guardian falsely claims that this Turner-nominated piece “investigated the fatal shooting of a Bedouin Palestinian, Yaakub Abu al-Qiyan, by Israeli police officers in 2017”, when, in fact, it was in response to their 2018 “Gaza Platform” exhibit at the Tate Gallery.

UKLFI, which advocates for Israeli causes, told the Guardian it had “suggested that the university should take appropriate disciplinary action” against Hudson in the months after the exhibition closed

Again, not true. As Jonathan Turner, UKLFI’s director, told us in an email, “our suggestion that the University take appropriate disciplinary action against the Director of the Gallery was made while the exhibition was continuing, not in the months after it closed“. It was based, he added, “on the fact that he had lied to the Vice Chancellor when he assured her that they had established the accuracy and legalities of the work presented”. The University’s response to UKLFI’s Freedom of Information request (shown to CAMERA UK) proved that no such investigation had been made.

The controversy dates from August, when a statement of solidarity with Palestine that formed part of an exhibition by Forensic Architecture, a Turner prize-nominated investigative agency, was removed after a complaint by UKLFI. The group suggested the university could have breached its public sector equality duties by not considering the “impact of the inflammatory language and representations” in the Whitworth’s “Cloud Studies” exhibition on Jewish people in Manchester.

The exhibition explored how pollution, chemical attacks and the aftermath of explosions affect marginalised people in Syria, Beirut, Louisiana and Indonesia, as well as Palestine.

In fact, UKLFI, along with the Manchester Jewish Community, had objected to the introductory statement for the exhibition which included the charge of “ethnic cleansing” and contained “inflammatory misrepresentations” regarding the recent war between Hamas and Israel.  As UKLFI correctly pointed out, Israel did not launch chemical attacks against Gaza, nor produce, as FA claimed, “toxic fumes covering entire residential areas.”  UKLFI’s full reply pointing out misrepresentations in the statement can be read here.

Here’s the FA statement in question: 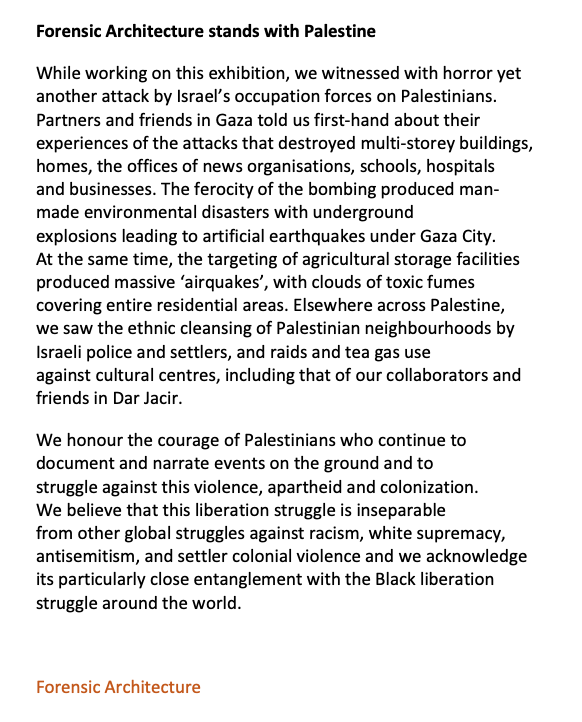 The university initially agreed to remove the “introductory statement”. However they backed down after FA demanded that the exhibition must close if their statement was removed. The University then added a statement by the Manchester Jewish Community posted outside the exhibition, before adding another statement by a pro-Palestinian organisation as well.

Moreover, the headline (“Whitworth gallery director Alistair Hudson forced out over Palestinian statement”) and text would likely lead Guardian readers with the misleading, if not completely false, impression that Hudson was “forced out” due to the pro-Palestinian message in the FA exhibition, or due to pressure from UKLFI, or a combination of both.

In fact, it’s not even clear if he was asked to leave, as, according to an article today in The Times,”the university declined to confirm last night if it had sought his resignation”, and Hudson himself neither confirmed or denied his departure.  If he was asked to leave, it could be due to the fact that, as UKLFI noted, “he had lied to the Vice Chancellor when he assured her that they had established the accuracy and legalities of the work presented”.

There’s quite a bit that’s not yet known about Hudson’s departure, yet the Guardian decided, regardless of the unanswered questions, to peddle their readers’ favourite narrative about the ‘Israel lobby’ stifling pro-Palestinian views in the UK.