Writing for The Guardian on March 10, Peter Beinart makes an amateurish and fundamentally flawed attempt to rely on international law to make a comparison between “Putin’s aggression” and U.S. recognition of Israel’s “annexation” of the Golan Heights.

The gist of Beinart’s argument is that the U.S. recognition contributed to the “erosion of the norm against international aggression,” and thus it is somehow hypocritical for the U.S. to criticize Russia for invading Ukraine.

In making this argument, Beinart exposes complete disdain for and ignorance of not only history, but of the very legal concepts he seeks to rely on. He also displays his own inconsistent concern for respect of international law.

The Facts of Israel’s Control over the Golan Heights

Israel’s control over the Golan Heights was a result of acts of aggression, but not Israel’s.

Arab aggression against Israel had been a feature of life in the region since even before Israel declared independence. Syria was one of the invading armies in 1948. It launched infiltration attacks on Israel through the end of the decade and into the 1950s. During the 1960s, Syria provided substantial operational assistance and support for Palestinian Arab attacks, while frequently shelling Israeli workers and towns from the Golan Heights.

Israel then captured the Golan Heights during the Six-Day War in 1967, which had been prompted by not only incessant attacks by state-sponsored armed bands (an act of aggression itself), but also by Egypt’s blockading of the Straits of Tiran (an act of war), the removal of UN peacekeeping forces from the Sinai, and the subsequent build-up of Arab forces surrounding Israel’s border – all amidst increasingly bellicose and genocidal statements by Arab officials. 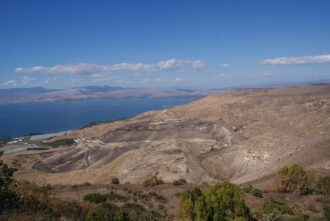 A view of the Golan Heights

Worth noting in light of Beinart’s attempted comparison, those Arab armies had been provided with billions of dollars in military aid from the Soviet Union, the predecessor to the Russian Federation which is currently invading Ukraine. Thousands of tanks and artillery pieces, hundreds of jets, and 1,400 military advisers had been shipped to these Arab countries by the Soviets prior to the Six-Day War. Indeed, Soviet intelligence likely played a significant role in causing the war when it fed Egypt false intelligence (a similar playbook Russia is employing today in relation to Ukraine) about Israeli troop movements just a few days before Nasser decided to remove UN peacekeepers.

Israel, acting in a clear case of self-defense, launched a preemptive strike and, within six days, pushed the surrounding Arab armies back. The territories Israel took control of during the war included the remainder of the Mandate Palestine area (Judea, Samaria, and Gaza), the Sinai Peninsula, and the Golan Heights.

No serious scholar or historian would argue that the Six-Day War was an act of Israeli aggression. Even the United Nations – notoriously biased against Israel – rejected a draft resolution after the war that sought to accuse Israel of “armed aggression.”

The Legality of Israel’s Control over the Golan Heights

Instead, Israel was acting in compliance with a basic principle of the United Nations. Responding to the Arab states’ “threat or use of force against [Israel’s] territorial integrity” – a violation of article 2(4) of the UN Charter – Israel engaged in its “inherent right of individual or collective self-defense,” a right explicitly protected in article 51 of the UN Charter.

By trying to compare Israel’s control of the Golan Heights to Russia’s invasion of Ukraine, and by implying both are examples of “aggression,” Beinart is trying to invert reality.

Israel did not launch a war of aggression against its neighbors to acquire territory. Rather, it acquired territory after successfully fending off a war of aggression. In such a case, Israel is entirely within its rights to maintain control of the territory, captured in a defensive war, at least until a final peace deal is reached between the parties. As the legal scholar Julius Stone wrote:

“The basic precept of international law concerning the rights of a state victim of aggression, which has lawfully occupied the attacking state’s territory in the course of self-defense, is also clear… This precept is that a lawful occupant such as Israel is entitled to remain in control of the territory involved pending negotiation of a treaty of peace. Both [United Nations] Resolution 242 (1967) and Resolution 338 (1973), adopted by the Security Council after the respective wars of those years, expressed this requirement for settlement by ‘negotiations between the parties’…” (Julius Stone, Israel and Palestine: Assault on the Law of Nations (John Hopkins University Press, 1981).

Other renowned legal scholars have elaborated on this from another angle, that of the principle of ex injuria jus non oritur (out of a wrong, no right can arise). According to Elihu Lauterpacht:

“[T]erritorial change can not properly take place as a result of the unlawful use of force. But to omit the word ‘unlawful’ is to change the substantive content of the rule and to turn an important safeguard of legal principle into an aggressor’s charter. For if force can never be used to effect lawful territorial change, then, if territory has once changed hands as a result of an unlawful use of force, the illegitimacy of the position thus established is sterilized by the prohibition upon the use of force to restore the lawful sovereign. This cannot be regarded as reasonable or correct.” (Elihu Lauterpacht, Jerusalem and the Holy Places, Anglo-Israel Association, Pamphlet No. 19 (1968), p. 51-53.)

Stephen M. Schwebel, another renowned scholar of international law, writing in the American Journal of International Law, echoed the same sentiment in 1970, writing:

“But that principle [that the acquisition of territory by war is inadmissible] must be read in particular cases together with other general principles, among them the still more general principle of which it is an application, namely, that no legal right shall spring from a wrong, and the Charter principle that the Members of the United Nations shall refrain in their international relations from the threat or use of force against the territorial integrity or political independence of any state. So read, the distinctions between aggressive conquest and defensive conquest, between the taking of territory legally held and the taking of territory illegally held, become no less vital and correct than the central principle itself. Those distinctions may be summarized as follows: (a) A state acting in lawful exercise of its right of self-defense may seize and occupy foreign territory as long as such seizure and occupation are necessary to its self-defense, (b) As a condition of its withdrawal from such territory, that state may require the institution of security measures reasonably designed to ensure that that territory shall not again be used to mount a threat or use of force against it of such a nature as to justify exercise of self-defense, (c) Where the prior holder of territory had seized that territory unlawfully, the state which subsequently takes that territory in the lawful exercise of self-defense has, against that prior holder, better title.”

In short, when Beinart claims that “[r]emaking borders by force violates a core principle of international law,” he erroneously simplifies the law and gets it wrong.

Israel’s capture and control of the Golan Heights was, and still is, entirely lawful. While Egypt signed a peace agreement with Israel, and was returned the Sinai Peninsula, Syria has to date refused to sign a peace agreement with Israel. The security threat remains after all these years, too. The Syrian regime has allowed its territory to be used by the Iranian regime and its assorted proxies in its ongoing effort to destroy the Jewish state, presenting a very real and continuing security threat.

It was this reality that the U.S. explicitly referenced when it recognized Israeli sovereignty over the Golan Heights. The proclamation read:

“The State of Israel took control of the Golan Heights in 1967 to safeguard its security from external threats.  Today, aggressive acts by Iran and terrorist groups, including Hizballah, in southern Syria continue to make the Golan Heights a potential launching ground for attacks on Israel.  Any possible future peace agreement in the region must account for Israel’s need to protect itself from Syria and other regional threats.  Based on these unique circumstances, it is therefore appropriate to recognize Israeli sovereignty over the Golan Heights.” (Emphasis added)

One can legitimately argue that Israel’s 1981 extension of civil law to the Golan Heights went beyond the parameters of international law, even taking into account that it was captured in a defensive war. But to suggest that these acts are eroding norms against “aggression” is simply historical and legal revisionism.

Notably, Beinart – a supporter of the Boycott, Divestment, and Sanctions movement against Israel – has no criticism for the European Union’s hypocritical treatment of Israeli settlements compared to Moroccan settlements in Western Sahara.

It’s not for lack of thought. Beinart himself brings up the example of Western Sahara, arguing that U.S. recognition of Moroccan control is also hypocritical in the face of condemnations of Russia’s invasion.

But Western Sahara serves as an excellent illustration of a form of inconsistency Beinart deliberately chooses to ignore.

As detailed by the legal scholar Eugene Kontorovich, the treatment of Israeli settlements in disputed territories is in marked contrast to the treatment of settlements in other contexts, such as Western Sahara, Cyprus, and Nagorno-Karabakh. In 2019, notwithstanding that the EU requires labeling of products from Israeli settlements, the EU concluded an agreement with Morocco which “extends to products originating in Western Sahara and subject to controls by the Moroccan customs authorities the same preferential tariff treatment as goods originating in Morocco.”

Is Beinart concerned with this hypocrisy? Does he view this inconsistency as eroding international norms against aggression?

“But boycott calls—at least by coalitions representing the near-consensus opinion of an entire oppressed group—are relatively rare. In recent years, there’s been a movement to boycott Morocco for its occupation of Western Sahara. Some activists from Xinjiang, Tibet, and Hong Kong have recently proposed boycotts of China—and the US has responded with sanctions. These efforts are laudable, but they’re fledgling. It’s hard to find a boycott movement that has been around as long or enjoys as much internal support as the Palestinian effort.

Why aren’t there equivalent efforts in Saudi Arabia? I don’t entirely know. Perhaps it’s easier to gain society-wide consensus for a boycott call when you’re being oppressed by a foreign power or a different racial or religious group. Imagine two scenarios: One in which Donald Trump imposes a dictatorship from within the US, and the other in which Canada invades (go with me here) and places Americans under martial law. From a human rights perspective, the former might be equally bad. But I suspect Americans would find it easier to launch a broad-based boycott call in the latter case because it would be easier to unite against an external foe.

These are interesting theoretical questions, at least to me. Ultimately, however, the question of whether it’s legitimate for Ben and Jerry’s to divest from settlements in the West Bank comes down to two simple questions: First, is a grave injustice occurring there? The answer is yes: Holding West Bank Palestinians without citizenship, free movement, due process, or the right to vote for the government that controls their lives constitutes a terrible crime. For more than half-a-century, Israel has denied millions of people the most basic of human rights. Second, do most Palestinians believe that boycotting West Bank settlements can help alleviate their suffering? The answer, overwhelmingly, is yes.

That’s what really matters. All the rest, as they say, is commentary.” (Emphasis added)

It seems that Beinart’s concern for consistency in the treatment of international law is fleeting.