On March 13th a report relating to missile attacks on the Iraqi city of Irbil [Erbil] the previous night appeared on the BBC News website’s Middle East page. One of the tags appended to that article is “Israel”.

The initial version of that report was titled “Irbil attack: Missiles from Iran hit northern Iraqi city, US says”. Readers found uncritical amplification of an obviously unverified claim from a clearly partisan source:

“There has been no confirmation of the launch from Iran, but Iranian state media cites sources as saying that “secret Israeli bases” were targeted.”

The report went on to refer to an incident that had not been reported by the BBC at the time:

“The attack came six days after two senior officers in Iran’s Islamic Revolution Guard Corps were killed in a suspected Israeli air strike near the Syrian capital Damascus. The IRGC had vowed to make Israel “pay for this crime”.”

Readers were given no further information about those “two senior officers” (who were originally portrayed as ‘civilians’ by Syrian state media) or the target of the alleged strike near Damascus: an Iranian weapons depot according to various sources. The Jerusalem Post reported at the time that:

“The two officers who were killed in a strike on Monday were identified by Tasnim as Col. Ehsan Karbalaeepour and Col. Morteza Saeednejad. According to reports, the two men were involved in Hezbollah’s precision-missile project.

The group, which has been working on the expensive and classified project since 2013, has been attempting to build factories to produce precision missiles in South Lebanon, Beirut, and the Bekaa under the guidance of senior Iranian officers.”

That information is also missing from the updated version of the BBC’s article which was published some seven hours later, after Iran had claimed responsibility for the attack, with the new headline “Irbil attack: Iran launches missiles at northern Iraqi city”. 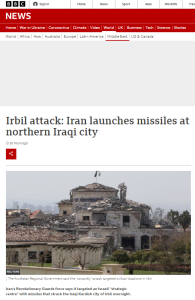 Readers are however provided from line one with more uncritical amplification of Iranian claims that the BBC has obviously not independently verified:

Israel’s military and government declined to comment on Iran’s claim. […]

Iranian state media cited a Revolutionary Guards statement as saying the force had targeted “the Zionists’ strategic centre of plotting and evil” in Irbil with precision-guided missiles in response to “recent crimes”.

The Revolutionary Guards had vowed to make Israel “pay” for an air strike near the Syrian capital Damascus on Monday that killed two senior Iranian officers.”

Clearly the BBC has no qualms whatsoever about amplifying unevidenced claims concerning supposed “secret Israeli bases” made by Iranian state media and the IRGC that it has not independently verified.