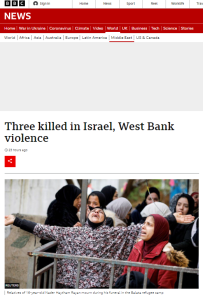 The report relates to three separate incidents in which members of Israel’s security forces were attacked while carrying out arrests and opens as follows:

“Two Palestinians have been killed by Israeli forces in separate incidents in the occupied West Bank.

A 16-year-old boy was shot dead during clashes in the Balata refugee camp near Nablus, while a man in his 20s was killed in the Qalandia camp outside Jerusalem, Palestinian officials said.

Israeli troops said they were attacked during raids to arrest militants.”

With regard to the incident in Balata, readers have to reach paragraph nine before they are given any kind of information as to what the “16-year-old boy” was doing at the time of his death. [emphasis added]

“Sixteen-year-old Nader Haytham Rayan died after being shot in the head, chest and stomach by Israeli troops in Balata on Tuesday morning, the Palestinian health ministry said.

Another three people were wounded, one of them critically, and were being treated at a hospital in Nablus, it added.

Israel’s paramilitary Border Police said its troops entered Balata to arrest a wanted suspect and that they found an M16 assault rifle.

As the troops were leaving the camp, Palestinians threw stones and other objects at them, a statement said. A “terrorist” also arrived on a motorbike and shot at the troops, who returned fire and “neutralised” him, it added.”

The BBC’s description of the Border Police as “paramilitary” is clearly misleading to most readers. The portrayal of the incident does not adequately clarify that the person who got off the scooter to fire at the Israeli security forces with a pistol was Nader Rayan. The BBC’s account does not name the arrested suspect and does not make any mention of the photographs of Rayan with weapons circulating on social media. No mention is made of the appearance of Fatah gunmen at Rayan’s funeral even though the main photograph heading the article depicts that event.

The BBC did however consider it appropriate to promote a statement from the Palestinian Authority concerning the deaths of people attacking members of the security forces:

“The Palestinian foreign ministry condemned the incidents in the West Bank as extra-judicial killings that should be punished under international law.”