“In Israel, some 90 Ukrainian children have been dressing up for the joyful Jewish holiday of Purim. They came on one of the first flights bringing refugees to the country earlier this month.

The refugees all come from a children’s home in the northern city of Zhytomyr. Some are orphans but most come from vulnerable backgrounds and have left relatives in Ukraine.

Ukraine has a large Jewish community. It has been suggested that more than 200,000 Ukrainians who are Jewish or have Jewish family ties are eligible for citizenship in Israel. Purim is a holiday that celebrates historic escape from danger for Jews in the time of the Persian Empire.” 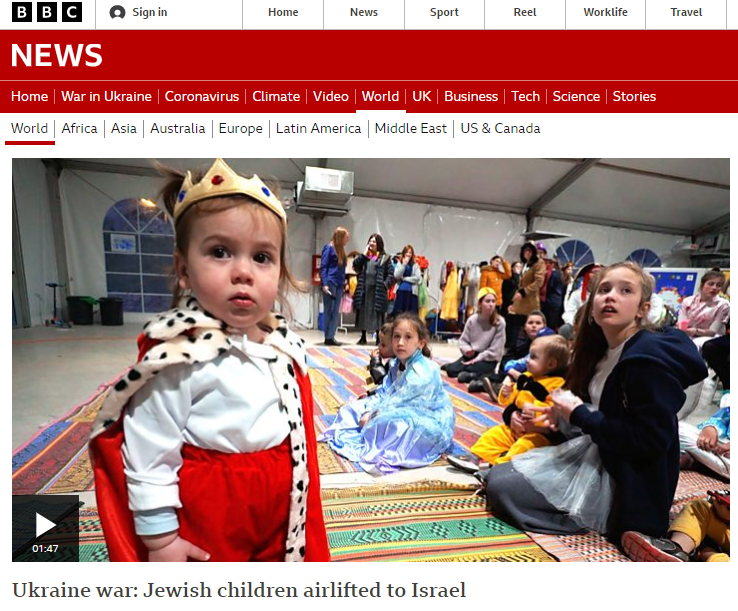 Additional stories which BBC audiences have yet to hear include the evacuation of paediatric cancer patients, injured Ukrainians and Holocaust survivors to Israel. The donation of six generators and four bullet-proof ambulances to Ukraine as well as the establishment of an Israeli field hospital which is due to open in the coming days have also not been covered by the BBC.

“Seventeen tons of equipment needed to set up an Israeli field hospital in Ukraine were loaded onto a cargo plane of national carrier El Al Thursday, the Health Ministry said in a statement.

The cargo will be flown later in the day to Poland and from there sent to the town of Mostyska in western Ukraine, where the hospital, dubbed “Kohav Meir” (“Shining Star”) will be set up.

A delegation of doctors led by David Dagan, chief of the State Hospitals Directorate at the Health Ministry, will fly out Sunday to staff the hospital. The delegation will include doctors and medical staff from across Israel’s health system, the statement said.”

The BBC News website report titled “How many refugees have fled Ukraine and where are they going?” which first appeared on March 1st – and has since been updated twenty-two times – still does not mention Israel despite thousands having arrived in the country since the Russian invasion began.