On the evening of March 20th a short item by the BBC Jerusalem bureau’s Yolande Knell which appeared on the BBC News website’s ‘live’ page was also presented on its ‘Middle East’ page with the headline “Zelensky challenges Israel’s neutrality over invasion”. 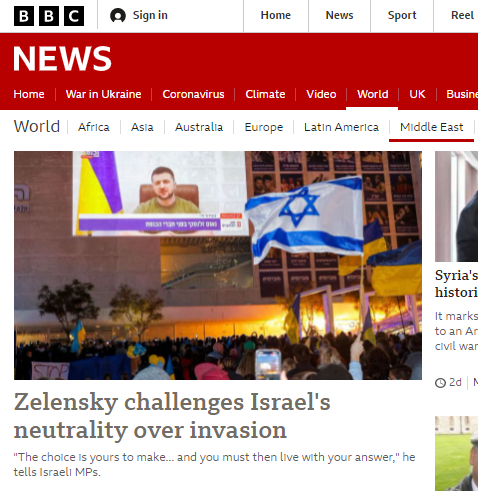 Knell’s report uses terms such as “indifferent”, “sitting on the fence” and “neutral position” in relation to a country which has taken in thousands of refugees and which has provided Ukraine with generators, ambulances, tons of humanitarian aid and a field hospital funded by the Israeli Health and Foreign Ministries, the Prime Minister’s Office and donations. 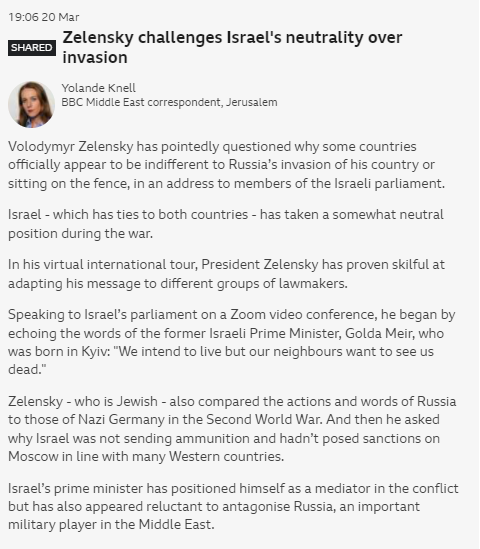 On the same day, listeners to the BBC World Service radio programme ‘Newshour’ (presented by Paul Henley) found similar messaging in reports from Yolande Knell aired before and after the Ukraine president’s speech to members of Israel’s Knesset.

In the programme’s afternoon edition (from 14:04 here) audiences heard the following from Knell: [emphasis in italics in the original, emphasis in bold added]

Knell: “…as you mentioned there is this policy of a kind of official ambivalence. We’ve had the foreign minister, who’s also the alternate prime minister, repeatedly denouncing Russia’s actions but then Israel has not joined Western sanctions on Russia and prime minister Naftali Bennett has specifically not condemned the Russian invasion.”

Knell: “He has justified this saying, you know, he is trying to act as a go-between, that the country has good relations with both Russia and Ukraine. He has taken multiple calls from Ukrainian and Russian leaders, has tried to be very engaged, he said this is his moral duty. He’s tried to look very statesman-like but we know of course that Israel is also protecting its own interests in the Middle East…ahm…because Israel unofficially coordinates with Russia in order to have a kind of free hand to attack any Iranian or Hizballah forces in neighbouring Syria so long as it doesn’t affect Russian troops on the ground. And so there’s a kind of policy of coexistence between Russia and Israel and Israel simply cannot afford to anger President Putin.”

The evening edition of the same programme began (from 00:28 here) with Paul Henley telling listeners: 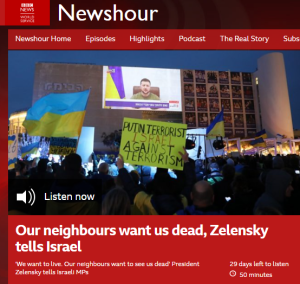 Henley: “Addressing MPs at the Knesset, Mr Zelensky said that Ukraine, like Israel, faced the threat of utter destruction and asked why Israel wasn’t providing his country with air defence weapons. He said the time had come for Israel to make a choice to drop neutrality and to forget any idea of mediating between what he called good and evil.”

As occasional BBC contributor Anshel Pfeffer has pointed out at the Jewish Chronicle:

“Iron Dome was designed to protect relatively small urban areas from makeshift and relatively short-range rockets launched by terror organisations. And it does that better than anyone could have expected. It would be much less effective against the vast range of rockets and guided missiles which the Russian army can fire in massive salvoes from dozens of launchers at widespread targets. And besides, Iron Dome is part of a much wider network of Israeli missile defence systems and it would take any army, not just the Ukrainians – whose air-defences are still based on old Soviet systems – years to fully integrate it and make it operational.”

Henley then brought in Yolande Knell who described Zelensky as “basically questioning the Israeli official position of either ambivalence or neutrality” before going on:

Knell: “and he asked, you know, why cannot you send ammunition. Israel has sent 100 tons of humanitarian aid but has been reluctant to get more involved in terms of any kind of military assistance, even when Ukraine has been asking for things like flak jackets and helmets. Unlike most Western countries, Israel has not taken the decision to join sanctions on Russia…”

Knell: “There has been a lot of questioning of how long Israel can stick with this sort of schizophrenic position where you have the foreign minister and the alternate prime minister Yair Lapid repeatedly denouncing Russia’s actions but the prime minister has pointedly not condemned the Russian invasion of Ukraine.”

After mentioning Bennett’s efforts to mediate between Russia and Ukraine, Knell went on:

Knell: “…but, you know, it’s well known within Israel that it’s protecting its own interests in the Middle East as well. It simply does not want to antagonise Russia because Israel has, by Russia, been given a kind of free hand to attack any Iranian and Hizballah forces in Syria next door so long as it doesn’t affect Russian troops.”

Once again listeners were given no reminder of the factors – including decisions taken by Western governments – which led to Russia controlling Syria’s airspace and Israel hence having to coordinate with Russia. The fact that other states, including members of the EU, are also employing pragmatic policies – such as the continued import of Russian gas – does not have a place in Knell’s framing of the story.

To date BBC audiences have not been informed of a video put out by Zelensky later the same day in which he appeared to moderate his position.

“Ukrainian President Volodymyr Zelensky late on Sunday changed tack and thanked Israel in his nightly video address, after criticizing Israel bitterly in a speech to its lawmakers earlier in the day.

“Of course, Israel has its interests, strategy to protect its citizens. We understand all of it,” Zelensky said in a video he posts daily to social media.

“The prime minister of Israel, Mr. [Naftali] Bennett, is trying to find a way of holding talks. And we are grateful for this. We are grateful for his efforts, so that sooner or later we will begin to have talks with Russia, possibly in Jerusalem,” he said, according to a translation by Reuters.”

Interestingly, none of Knell’s reports inform BBC audiences that not all the members of the Knesset were present for Zelensky’s speech.

“The two Arab Israeli parties chose to snub Ukrainian President Volodymyr Zelensky’s speech to the Knesset on Sunday night, with only one Arab lawmaker out of their 10 MKs showing up.

Joint List chief Ayman Odeh skipped the speech, as did the two other lawmakers from his Hadash faction, party officials said. A spokesperson for Odeh did not respond to a request for comment.

“Our position is that NATO and its leader America imposed this war,” said Mansour Dahamsheh, the Hadash party’s secretary-general, in a phone call with The Times of Israel.”

Clearly both the framing and omissions in Knell’s reports compromise audience understanding of the story she purports to tell.