On the morning of March 27th the BBC News website published a report by Yolande Knell headlined “The Palestinian cancer centre that can’t take patients” on its ‘Middle East’ page. 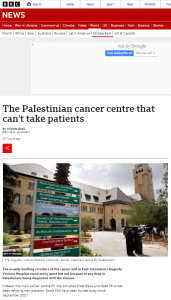 Almost identical audio versions of that report from the BBC Jerusalem bureau correspondent were aired on the BBC Radio 4 and BBC World Service radio programmes both titled ‘From Our Own Correspondent’ the previous day:

“International observers are increasingly worried that a cash-strapped Palestinian Authority could face financial collapse. The Palestinian economy – long stagnating – has crumbled further during the pandemic and following a decline in international aid. Earlier this month, the International Monetary Fund described the fiscal outlook as “dire”, against a backdrop of persistently high unemployment and poverty. Meanwhile vital access to healthcare is being affected. Yolande Knell finds that some cancer patients’ treatment is now at risk.”

Both the written and audio versions of Knell’s report feature a tragic story about a youth from the Gaza Strip who died in early January after being refused treatment at four Palestinian hospitals that are owed money by the Palestinian Authority.

“Earlier this year, Salem al-Nawati, a 16-year-old with leukaemia from Gaza, collapsed at the PA Health Ministry in Ramallah, while his uncle was fighting for him to be given a hospital bed – and was declared dead soon after.

Now, back at the family’s home, surrounded by Salem’s glowing school reports and Taekwondo medals, Jamal al-Nawati details the problems he faced.

Gaza hospitals are ill-equipped to treat many serious cancer cases and without East Jerusalem as an option, his nephew was given a medical referral and PA financial guarantee to be treated in a private hospital in Nablus.

Israel – which controls access for Gazans to the West Bank – initially refused Salem a travel permit, his family says for security reasons, delaying his exit by a month. By the time he made it to Nablus, the hospital turned him away because its bills had gone unpaid by the PA.

“I was wondering what we’d done wrong, what had this poor patient ever done?” says Mr al-Nawati, recalling his feeling of helplessness.

“Salem’s condition was deteriorating hour-by-hour, day-by-day. He was so sad, asking me why he was being refused treatment, and I was doing my best to reassure him.”

Eventually, after an influential family friend intervened, PA officials offered to send Salem to an Israeli hospital, but his Israeli permit did not allow him to travel there. And then it was too late.” [emphasis added]

Jamal al Nawati [or a-Nawati] is the boy’s uncle. Knell does not explain why she interviewed him rather than the boy’s parents. When the same story was covered by Nurit Yohanan for Israel’s public broadcaster Kan 11 in early February, it was reported that “because the official request was submitted too close to the date of the treatment, Israel in the beginning did not approve his exit [from the Gaza Strip] and the second request was rejected by the Palestinian hospital itself. When he arrived in Nablus after a month, the real trouble began”. [emphasis added]

Salim was refused treatment by the hospital in Nablus, the Augusta Victoria and al Makassed hospitals in Jerusalem because of Palestinian Authority debts to those hospitals.  A commission of inquiry set up by the PA ministry of health found that the hospital managers were responsible, along with “the MoH Department for Treatment Abroad, Medical Patient Transfer System”.

Knell’s reports note the scale of the debts owed to one of the hospitals concerned, Augusta Victoria:

“…the main cancer centre for the occupied West Bank and Gaza Strip has been refusing new patients. Some 500 have been turned away since September 2021.

The Palestinian Authority (PA) – which is supposed to fund their medical care – owes the hospital some $72m (£55m; 65m euros). This has left it unable to afford the expensive drugs needed for chemotherapy and other treatments.”

Her explanation of the factors behind that situation is as follows:

“The PA says it is facing the worst financial crisis since it came into existence three decades ago.

Like others around the world, its economy has been hit by Covid and soaring inflation. However, it is also mired in problems linked to the Palestinians’ decades-old conflict with Israel.

Israel withholds vital tax revenues it collects on behalf of the PA because of the payments that it makes to Palestinians in Israeli jails and the families of those killed by Israeli forces. Israel argues that these encourage terrorism, while the Palestinians see them as welfare support.

The same thorny issue has led to the US Congress prohibiting direct aid.

Meanwhile, concerns that Palestinian school books glorify violence and promote anti-Semitism have blocked millions of euros from the European Union (EU) – historically, the biggest donor to the PA. Since 2020 most aid has not been handed over.” [emphasis added]

Knell does not adequately clarify that the “Palestinians in Israeli jails” are convicted terrorists and that “those killed by Israeli forces” were carrying out terror attacks at the time. Her failure – once again – to adequately clarify those crucial points compromises the ability of readers and listeners to understand why “Israel argues that these encourage terrorism”.

Neither does she explain that the US Congress acts in accordance with the Taylor Force Act, as explained in an article at the Jerusalem Post late last year:

“In the US, the Taylor Force Act (TFA) raised the stakes, conditioning the vast majority of US aid to the PA on abolishing the PA’s terror reward payments. Following the US, the Netherlands and Australia cut off all funding to the PA. In parallel, the Israeli parliament passed legislation deducting the amount the PA paid to terrorists from the taxes Israel collects and gives to the PA.

As a result of TFA, the PA has lost over $600 million of potential aid from the US alone. Information recently provided to PMW by the Finance Ministry shows that the implementation of the Israeli law has so far cost the Palestinians over 1.4 billion shekels.”

The “problems” behind the Palestinian Authority’s self-inflicted financial crisis (which the BBC has been reporting badly for years) are hence in no small part rooted in the fact that it prioritises financial rewards for terrorism and encourages incitement to hate and glorification of terror. As explained in the same Jerusalem Post article:

“Now imagine if the PA would stop incentivizing terror by rewarding terrorists: the PA and the Palestinian economy would enjoy a four-fold windfall. First, the PA would save the estimated 700 million to a billion shekels it pays annually to terrorists and their families. Next, the US, the Netherlands, Australia and others who cut funding would be able to renew their aid to the PA, bringing in hundreds of millions of additional dollars. Israel could stop implementing its law, thereby inflating the PA coffers by another 600 million shekels annually. Finally, if the PA also stopped promoting terror, in the absence of constant violence, investment activity in the PA could potentially boom.”

However, not for the first time, rather than challenging the Palestinian Authority officials who are responsible for those harmful policies, Yolande Knell once again preferred to focus audience attentions on some of their effects: the plight of helpless patients and hospital staff.

US TAYLOR FORCE ACT NOT NEWSWORTHY FOR THE BBC