For over a year we have been documenting the BBC News website’s reporting on political stunts organised by a group of UK anti-Israel extremists calling themselves ‘Palestine Action’.

None of the BBC’s nine reports published in the past 13 months has provided audiences with a proper explanation of the group, its tactics and its political agenda, which includes the following:

The same applies to a report published on the BBC News website’s ‘Leicester’ page on March 28th which was also promoted in the ‘updates’ section of its ‘Middle East’ page.

Headlined “Arrests at pro-Palestinian Leicester drone factory protest” that report by Sonia Kataria of BBC East Midlands describes ‘Palestine Action’ merely as a “campaign group”, once again failing to provide the full range of information about the real aims of the group whose political stunts it repeatedly chooses to report. 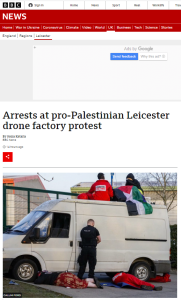 The article closes with what appears to be a section partly copy/pasted from a previous related report that appeared in August 2021:

“The Leicester facility builds unmanned aerial vehicles that the protesters allege were used in the conflict between Israel and Hamas in Gaza.

A ceasefire was agreed on 21 May between Israel and the Palestinian militant group Hamas, with both claiming victory.

It came after 11 days of fighting, which left at least 255 people dead.

It culminated in clashes at al-Aqsa, a holy site revered by both Muslims and Jews.

Obviously in the ten months that have passed since ‘Operation Guardian of the Walls’, BBC East Midlands has not bothered to confirm or refute that allegation from “the protesters” which it has repeatedly uncritically amplified.

Clearly the claim that the “11 days of fighting…culminated in clashes at al-Aqsa” is misleading given that (as is clear in the previous report from which that sentence is apparently taken) those pre-planned “clashes” took place before the commencement of the “11 days of fighting” (during which terrorist groups fired some 4,400 rockets at civilian targets in Israel).

Clearly too the writer of this report is insufficiently familiar with the BBC’s style guide entry concerning Temple Mount, with the result being that readers are inaccurately informed that “al Aqsa” is “revered by…Jews”.